A few days ago, while walking down a nearby street, I came upon an enormous wild turkey. It was rather a surprising sight in the middle of Cambridge, Massachusetts. A confused man was taking pictures of it. We had a little chat about how confused we were about it.

Later the same day, I was walking through the Harvard Business School campus and this big crowd of people went by. Several people in the crowd, at several points, began dancing when they saw me, waving their arms around, sticking their legs in the air, and saying hello to me. I smiled at them politely, all the time secretly wondering WTF was going on. Were they a dance troupe? And drunk? Later, I passed a reflective window and realized I was wearing my t-shirt that says “ALLOW ME TO EXPLAIN THROUGH INTERPRETIVE DANCE.”

Next (it was quite a day for encounters), I was walking along Memorial Drive — probably the most trafficked road around, crowded with very fast cars — when suddenly, the traffic came to a complete halt. Why? Because about 40 geese and goslings had decided to cross Memorial Drive, taking their own sweet time, stopping to honk a bit, changing their minds and turning around to go back, changing their minds again and turning forward to continue on, perhaps pecking at a few tires. It made me so happy. This happens here all the time and busy commuters are adorably patient about it. It’s appropriate that Make Way for Ducklings takes place in Boston.

As I write this, I’m sitting by an open window. I just heard someone on the street yell to someone else, “Are you expecting a lot of rain?” (It’s a very sunny day.) I looked out the window and saw a woman holding a huge rolled-up umbrella in one hand and holding a toddler by the other hand. “No!” she yelled back, gesticulating with the umbrella. “I just wanted to be prepared for the wild turkey!”

Seems it’s moved in for good and is gaining a reputation.

Hope you’re all well on this Monday, and enjoying the creatures in your neighborhood. :o) 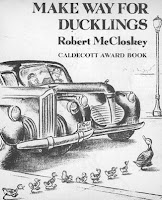