A friend, knowing my usual one-book-at-a-time writing mode and understanding that at the moment, I’m working on three books, asked me if I’ve adopted a new way of working. The answer is no. I’m writing books the same way I always have. I start at the beginning of a book and write it through to the end. Then that book moves into the revision stage; over the course of however-long, my editor and I pass it back and forth and I revise it several times. While a book is in the revision stage, there are extended periods of time when either it’s with my editor or we are giving it some needed space. During that time, I start the next book and write it through to the end. Rinse and repeat.

The reason I have three books in the works at the moment is that I wrote the first draft of one of them – the first one – really fast, but the revisions are going really really slowly. In the meantime, I’ve written a second book that’s now also in revisions and is probably going to overtake the first book. I just handed a revision of the second book in to my editor and she and I are agreed that it’s not yet time for me to take another crack at revising the first book. (Every book needs something different. That book needs a LOT of space.) So I’m starting the next book (#3) and intend to write it through to the end. :o)

The new book I’m starting is a book I’ve been planning for years. Planning is fun and exciting but as I begin to near the actual writing, I am often filled with a sense of dread. This is because I’ve done this enough times now that I know what’s ahead. Beginnings are the hardest part of a book for me. For weeks and weeks and months, I make little progress, my characters don’t feel real to me, I can’t figure out who they actually are, my plot feels stupid and hopeless, and I’m constantly overwhelmed by the weight of all the pages I haven’t written yet. These feelings are not due to low self-esteem or pessimism; I would bet I’m going to be very happy with the book in the end. They’re merely due to the realities of writing. You spend a lot of time at the beginning struggling to get out of the primordial muck, or at least, I do. That’s just the way it is, and it’s helpful to understand that it’s just the way it is, but it doesn’t make it fun to be stuck there.

I told some friends that now that I have all my ideas together, I wish I could just wave a wand at the ideas and the book would appear; instead, I will dive into this months-long, useless-feeling muddle. One of my friends, also writing a book, responded that she didn’t know what I was talking about. According to these people she follows on Twitter, it only takes them three weeks to write a novel and the novel is amazing. Snorts all around. It’s true that at this point in the writing, I tend to be hopeful and perhaps a bit over-optimistic (I need to be, or else I would never begin!), but at least I’m not delusional. I know perfectly well that a year from now, I will probably still be writing the first draft, and once I’m done with the first draft, when I look upon it, I will see that while parts of it are, in fact, exactly what I hoped they would be, other parts are a big steaming pile of crap. AS THEY SHOULD BE. First drafts are exactly that: drafty, and meant to be followed by more attempts.

As I begin, I am collecting and consolidating all the little planny-comments I’ve been jotting down for years in a couple of different notebooks, on random slips of paper, and on my phone. I’m reminded that one should really be quite explicit when jotting down ideas for a book one will probably not be writing for a long time. Today I encountered the helpful note, “Remember the Bolsheviks!!!” Apparently I was very excited when I jotted this down. There were several exclamation points. Regrettably, I have since completely forgotten the Bolsheviks (nor does the book take place in Russia) so I have no idea what I meant by that. Another comment said, “Putting aside what doesn’t matter, to push away what doesn’t matter. Is this what I’m looking for?” Um. It’s kind of hard to tell?

By the end of my workday today, my new book plan was hanging radiantly on the wall (mounted on my usual handmade cloth bulletin board). I took a few pictures and sent them to a few concerned parties. See for yourself: my book plan looks like a badly-played game of Tetris. This is appropriate, as it sort of feels that way, too… fun and exciting, while infused with panic and a sense of doom. 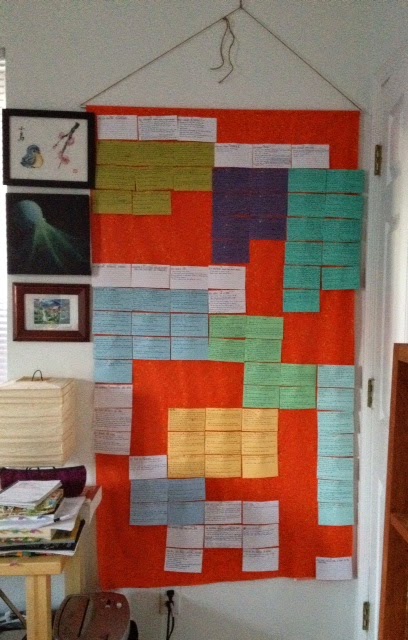 And so it begins.

Godspeed to all writers :o)