Before I get to the FAQ, I like my friend Sam’s short Tuesday post about climate change, blame, and responsibility. I also like this xkcd (though this one is still my favorite). AND I like watching those ladies luge. Have you been watching the ladies luge? The speed they achieve defies belief! And how about those snowboarders? Plus, figure skating! Tune in tonight to watch Stéphane Lambiel spin. ♥

I like this short opinion piece about gender politics and the Olympics: After Atalanta on alterations to the men’s and women’s luge tracks following the death of Georgian luger, Nodar Kumaritashvili. (H/t, J.)

This is a Visa commercial and it makes me cry and I’m not ashamed of that. BTW, the person at Visa who decided to hire Morgan Freeman to narrate the ads? I hope you got a raise. (Watch the Derek Redmond one, too, and click on some of the others! Love the Kerri Strug one, too.)

******
You post about music a lot, so I know it’s important to you. Do you listen to music while you write? Do you have a playlist for Graceling or Fire that you could share with us? 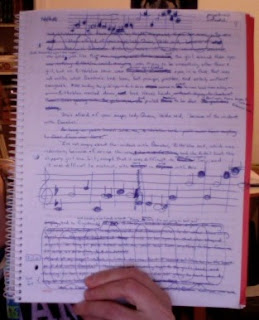 When I write, I usually need silence and often wear earplugs. I hardly ever listen to music while I write, and this picture of my notebook last Friday — when I was trying to write and listen at the same time — should explain why. See the marks on the page that look suspiciously unlike words or cross-outs? See what happens? I am easily distracted, and music is Very Distracting. I start trying to figure out why a particular piece of music is making me feel the way it’s making me feel, and suddenly I’m thinking about notes and their relation to each other instead of what I’m supposed to be doing — writing. And one question leads to another, and before you know it, I’m boggling my brain with silly questions like, what’s between a D and a D sharp? What’s between an E and an F? Is there really no musical tone that fits between them, and if there is, when do we get to play them? Were scales discovered or invented? If invented, what’s with all the half-steps — why is an E sharp the same as an F — who’s idea was it to label the notes that way? Why aren’t the notes arranged into a “septive,” with only whole steps all the way through? Are there cultures where the music is based on septives? Would their music sound dreadful to me?

One minute, I’m trying to write a scene, and the next, I’m making a list of preposterous questions to ask my Aunt Marzipan the professional musician, so that she can save me from myself. Or else my nose is in the dictionary, and NOT because of my writing. “Tone: a musical sound of definite pitch, consisting of several relatively simple constituents called partial tones, the lowest of which is called the fundamental tone and the others harmonics or overtones.” Fascinating!!! Or else, I’m checking my online library catalog and DISCOVERING THAT I CAN REQUEST MUSICAL SCORES. ZOMG. *flops* (*does not write*)

Actually, there is one piece of music I listened to a lot — but only during breaks — while I was writing and revising Fire. It’s fiddle music, not surprisingly, and you can listen to the first 90 seconds of it at the website of Prince Edward Island fiddler Cynthia MacLeod. Scroll down to the album Crackerjack and click on Track 11, “Fingal’s Cave – Cutting Ferns – Lochiel’s Awa’ To France – Sunday Morning Mojo – Bird’s Nest.” The track is a combination of those five reels, but the only one you’ll hear in the clip is the first one, “Fingal’s Cave.” I listened to that track over and over while writing Fire; I would take a break from writing, lie on the floor, and listen to it, and it would restore me. When Fire plays the Dellian lament, I imagine it sounding like “Fingal’s Cave,” and when she’s playing her reels with Krell, I imagine it sounding like the other four reels, which, like I said, you can’t hear in this clip, but which are super-fast and super-fun.

I had no go-to music with Graceling. And I’m never actively looking for music to assist my writing. I discovered the MacLeod CD by accident after attending a ceilidh (pronounced KAY-lee) in PEI where MacLeod’s performance basically stole the show; the “Fingal’s Cave” track took me by surprise. I’ve had a similar experience recently with Bitterblue, in that I’ve stumbled across a piece of music that seems to connect with Bitterblue in my head for some reason. I’ve been listening to it obsessively — which is why I was having a problem last Friday. It’s called “Sacrifice” and is from the Buffy episode “The Gift.” You can listen to it here.

Sorry I can’t offer a playlist! But yours would be just as valid as mine — make one up for yourself. My sister, secret codename: Apocalyptica the Flimflammer, tells me that the Björk song “Isobel” always makes her think of Fire… (lyrics: “in a forest pitch-dark / glowed the tiniest spark / it burst into flame / like me : like me”)… and my editor says the same about Holly Cole’s “The Briar and the Rose.” I think it’d be fun to hear the playlist everyone else came up with!