So, years ago, when I started an email correspondence with my lovely Australian publicist, we discovered that not only had he and I both studied at Sydney Uni at the same time, in the same program, possibly even taking the same lectures — but I’d worked at the pub where he’d gone to drink beer! Isn’t it funny that I had to come back home, finish college, go to grad school, write a book, and get an Australian deal for us to get to know each other?

I got to meet Brendan in person during the Sydney leg of my trip. We went back to our old stomping grounds for dinner — the Nag’s Head, in Glebe. It was so surreal. Every time I rounded a corner, memories came rushing back.

I can’t remember if I made a point, before this Australia trip, of explaining here on the blog that when I was in college, I spent a year in Sydney. I think I may have failed to do that! I studied English at Sydney Uni, lived in Darlington, screwed up people’s orders at the Nag’s Head, got into a lot of mischief, walked down to the harbour frequently, and traveled. It was a wonderful year.

One thing I *didn’t* get to do during that year was spend much time in Melbourne, so both legs of this trip were a delight. In Sydney, I stayed with a wonderful writer friend (“wonderful writer friend” = “person who is a wonderful friend AND a wonderful writer.” Like Charlotte, you know) and didn’t worry about running around doing a million touristy things — because I’d lived there before. I got to revisit old haunts and old favorites, calmly savoring the beauty of this city. (There may be no sight more beautiful at the end of a 12-hour plane ride than Sydney through your airplane window.) In Melbourne, I got to be the tourist — with a second wonderful writer friend, also an American, also a tourist! We tore up the town. THE WHOLE TRIP WAS SMASHING.

A huge full moon was hanging over the city skyline one night as we drove into downtown Sydney. The thing about a full moon in Australia is that it’s my family’s sun, as they experience day on the other side of the earth, that’s lighting up that moon. And now that I’m back home, I think about how the sun of my Australia friends is lighting up my moon :o).

I picked up a couple guys in Melbourne. 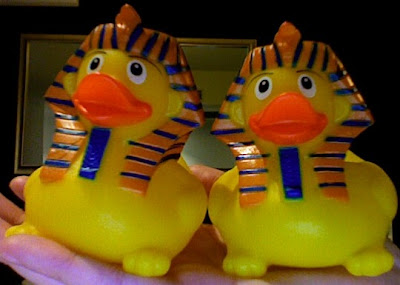 The I took them to the register, bought them, packed them in a box, and sent them away to their intended recipients.

Yes, King Tut was in Melbourne! Or, rather, his stuff was. Tut himself was in Egypt, I believe, where he belongs. King Tut’s stuff? Breathtaking.

This blog post is all over the place, so I may as well end by embedding this hilarious clip from the Tony Awards. It involves Hugh Jackman, who’s Australian, so that makes it relevant, right? Thanks, Sam, for the link.

Closer to home — before I go, there’s a book just out that I recommend: The Lost Crown, by Sarah Miller. This is beautiful and heartbreaking historical fiction about Olga, Tatiana, Maria, and Anastasia, a.k.a. the daughters of Tsar Nicholas II.

For my next blog post, I’m going to try for some structure.