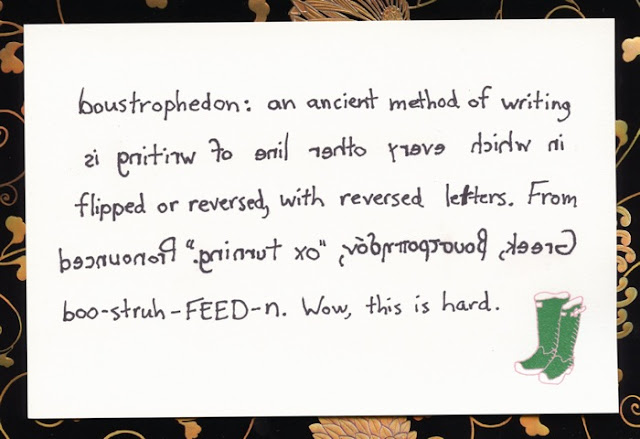 Boustrophedon [boo-struh-FEED-n], from the Greek βουστροφηδόν, βοῦς (bous) meaning “ox” and στροφή (strophē) meaning “turn”: An ancient method of writing in which every other line of writing is flipped or reversed, with reversed letters. The way oxen would write, you know, if they were turning back and forth in the fields in order to write, rather than in order to pull the plow. :D?

The derivation of this word brings back memories for me, because I took ancient Greek in high school, and I remember the word βοῦς (bous). Except that I remember it meaning bull, not ox, and I remember combining it with the word κόπρος (kopros), meaning “shit.” Bouskopros [BOOS-KOP-ross]: A disguised way to say “bullshit” to the non-Greek-speaking Jesuit priests and brothers without getting sent to Jug. Jug [JUG]: What we had instead of detention at my Jesuit high school. An acronym for “Justice Under God.” I am not even kidding.

Wow, is it ever hard to write letters backwards when you’re not used to it. It was actually easier for me to write the Greek backwards than the English, I suppose because I’m working against decades of writing English letters forwards, whereas I hardly ever write Greek letters at all.

Please note that according to my various sources (which include the Oxford English Dictionary, Wikipedia, and Dictionary.com), traditional boustrophedon begins with letters going right to left, then switches left to right. I decided to start left to right because I didn’t want to lose y’all before I’d even begun.

Ready for your next word?

Zugzwang [TSOOK-tsvahng], from German Zug meaning “move” and Zwang meaning “constraint” or “obligation”: A position in which one player can move only with loss or severe disadvantage.

This word came to me one happy day via Morris in London, who used it casually in an e-mail to his daughter Rebecca, who then e-mailed me RIGHT AWAY to tell me about it. It’s a chess term. It describes that moment wherein no matter which way you move, you’re going to lose a piece you don’t want to lose. I’ve been in zugzwang countless times while playing chess. But I’m a whole lot more interested in its metaphorical uses.

I bet you can think of a moment when someone or something has trapped you in a situation wherein every choice open to you is going to worsen your position and really, really hurt. So you make the best choice you can, proceed through the pain, and hope for the best. Like that guy in 127 Hours who had to chop off his own arm in order to escape from the canyon. Or, less dramatically, like when your recipe calls for a perfectly-ripe avocado but all the avocados at the store are hard as rocks, so you either have to make your recipe with an icky under-ripe avocado or figure out something else to make entirely. Or, like when you’re scared of something, and your only options are either to give up or to open yourself to the scary thing. Often in life, every option hurts.

What I love about zugzwang is that even though, when it happens to you, it feels like you’re about to lose the game, that is not, in fact, the inevitable result. Whatever sacrifice you decide to make, it’s still with the ultimate intention of trying to win. You choose your loss, make your next move, and hold on to the hope that in losing the battle, you might win the war; that moving through the pain will get you to the other side of the pain. Zugzwang tests our faith.

So, the other morning in Seattle, I woke up to this frantic text from my sister, codename: Apocalyptica the Flimflammer:

Confused and groggy, I did as I was told. Amazement and elation ensued, closely followed by an email to Marie in Paris.

Why? Because one day, four months ago, while taking pictures in Paris, I complained to Marie about how much I dislike the fake shutter noise my iPhone makes whenever I take a picture. It’s a digital camera, so why does it have to make that big, loud, fake shutter noise? And Marie said, “There’s a word for that phenomenon, but I can’t remember what it is.”

“Oh my god! I’m dying to know what the word is!” I said, which is how any reasonable person would react.

“Me too!” said Marie, because she is also reasonable.

A month later, while taking pictures along a Swampscott beach with Apocalyptica, I complained about the noise again. “Also,” I said, “Marie says there’s a word for the phenomenon, but she can’t remember it, and we’re dying to know what it is!”

“Oh my god!” said Apocalyptica. “I’m dying to know what the word is!”

Fast forward three months to the other morning, when Apocalyptica’s coworker said to Apocalyptica, “I think you would enjoy this new word I just read in an article in Scientific American,” then handed Apocalyptica the very word that she, Marie, and I have been striving after for months!

Skeuomorph [SKYOO-uh-mawrf], from Greek σκεῦος (skeuos) meaning “container” or “tool” and μορφή (morphê) meaning “shape”: a physical ornament or design on an object copied from a form of the object when made from another material or by other techniques. Examples include pottery embellished with imitation rivets reminiscent of similar pots made of metal, or a software calendar application which displays the days organized on animated month pages in imitation of a paper desk calendar.

BTW, that definition came directly from the Skeuomorph Wikipedia page, which I recommend for further clarification. This is a difficult concept to paraphrase, and the Wikipedia page gives lots of good examples. Also, here’s a blog post that shows a lot of interesting examples of skeuomorphism in design.

The shutter sound on the iPhone camera is an auditory skeuomorph.

Marie is now requesting the word for when you need a word that doesn’t exist. Unfortunately, I don’t think it exists :).  But if it does, I expect the fates will send it to us within… oh, about four months.

Final word of the day:

Irony-yak [AHY-ruh-nee-YAK], compound construction, from Latin “ironia” and Tibetan “gyag”: A large, stocky, shaggy-haired wild ox that appears on the scene every time there exists an indirect and often amusing contradiction between an action or expression and the context in which it occurs. Hmm? What? OKAY FINE I made it up. Welcome to the limitations of the English language (and also reality). I will merely comment that if there were such a thing as an ironyyak, I would’ve had a very special moment in my Scrabble game this afternoon.

That does it for my word roundup. Blessings on all those who, upon learning wonderful new words, share them.