I’m always anxious to spell people’s names correctly when I’m signing books, and in a foreign country where the names and pronunciations are unfamiliar, I really need to see names written in order to understand them. The two French phrases I used most often over the past few days — even more frequently than Désolé, je ne parle pas français (Sorry, I don’t speak French) — were À quel nom? (To what name?) and Pouvez-vous l’écrire? (Can you write it?) And people did write their names for me, very graciously. And now I have a ratty souvenir: 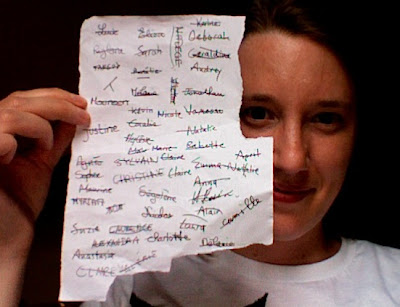 I’ll put it on my bulletin board!

One thought as I prepare to leave Épinal: how I wish that English-language publishers would take the trouble to translate and publish more contemporary foreign books in English. Yes, I know it’s difficult and requires foreign-language readers in the acquisitions department. Yes, I know there are gazillions of books in English already on the market. But honestly? It’s a tragedy that readers of English are missing so much of the literature of other places and languages, and it’s a shame that writers in other languages don’t have the opportunity to share their books with English readers. I can’t tell you how many times I’ve met foreign authors who’ve read my book in translation, or plan to do so, and who’ve written books that sound fascinating — but I can’t read them, because their books have not been translated into English. The English language seems to be an insurmountable wall when it comes to foreign rights deals. Not only is it not fair, but it’s a terrible loss to readers who read in English.

If you can read French, please read Charlotte Bousquet’s La Marque de la bête and Alain Damasio’s La Horde du Contrevent, and enjoy them for your own sake and mine, too, because I can’t read them! Maybe someday….

Next time I blog, I’ll be home again.