(Or so sings Lou Reed in one of the best songs ever… except that it sounds so sad when he sings it. I don’t mean it so sadly!)

Last week was a tough one. You know those times when you’re contemplating everything you’ve done in the past year, and then suddenly you realize you did all that stuff in the past month?
Anyway, Wednesday night, I went to bed completely rattled, burned out, and beat. Thursday morning, I woke to a phone call from a lady at my credit card company, who was calling to verify suspicious activity on my account. She was right: I had NOT purchased a song online for 99 cents the day before. (Though I had three days prior, making it a particularly clever theft for the perpetrator to have perpetrated — but, um, still a bit underwhelming? 99 cents? Is it really worth going to all the trouble of being nefarious to buy one song on iTunes?).
Why, I asked the lady, would anyone steal my credit card info and then spend 99 cents? I dropped my credit card in the rain on 53rd and 5th once while I was living in New York. The people who got their hands on that card went straight to Saks 5th Avenue, where nothing costs 99 cents.
Because, the nice credit card lady explained to me, thieves will do this sometimes to test out the card and/or establish themselves as legitimate purchasers with the card. If it works, it means they’ve pulled the wool over the credit card company’s eyes. Then they start making the big purchases.
I decided to interpret the entire experience as a sign that I needed a day off or I was going to die.
Forthwith, I sat on the couch for hours, ate oatmeal, and watched Buffy. Then, I carried Pride and Prejudice to my local tea shop and read it while drinking a pot of tea and eating scones and little crustless triangle sandwiches. Then, I did some window shopping, bought a greeting card I liked, and bought a used book called The Unbearable Lightness of Scones. (It’s a mystery by Alexander McCall Smith, the audiobook of whose No. 1 Ladies’ Detective Agency was my chosen listening on airplanes in March. Great audiobook, btw — wonderfully read by Lisette Lecat.). I walked in the sun. I visited the river. I came home and cooked tilapia with portobello mushrooms, sweet onions, and white wine. (Recipe here.) I drank a beer. (I’m sure you’re supposed to drink white wine when eating tilapia cooked with white wine, but, well, I didn’t feel like drinking white wine, so there.)
It was a perfect day; it was just the rest I needed. So, thank you, really stupid 99-cent thief, for being the straw that broke the camel’s back and gave me a day off. (Or something.)
Do you work too hard? How do you refuel?
I leave you with my new card (which can be purchased as a magnet here). 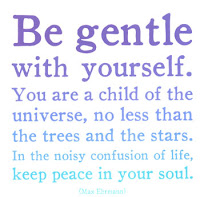