Angel to the team: This may come out a little pretentious, but one of you will betray me.
(Spike raises his hand to volunteer.)
Angel (giving Spike a disgusted look, then turning to Wesley): Wes.
Spike (disappointed): Aw! Can I deny you three times?

As a writer who’s also a workaholic, sometimes I need a particular kind of rest. Namely, I need to take a break from output and spend some time on input, as if I’m refueling. It’s tricky, because when this happens, I need to find things to read or watch or do that will NOT encourage my mind to spin about my own work. IOW, I don’t sit down with a novel or movie that has similarities to my own — because that would not be restful. But I *do* watch Friends reruns, and maybe read some scifi or Peanuts or nonfiction.

My instincts tell me when I need this kind of rest, and I always listen, because not listening — keeping working — leads to burnout.

Consequently, this weekend, due to my fondness for Ving Rhames, Jonathan Rhys-Meyers, and Billy Crudup, I watched Mission Impossible III, and let me tell you, this led to some deep thought. Here’s what I concluded: there are a number of reasons why that mission would have been highly improbable for me. (Um, spoilers ahead, sort of?) I don’t have much experience with guns, and no experience while hanging out of the open door of a moving car; I could probably be convinced to base jump off a building under very specific circumstances, but not as part of a robbery, not while being shot at, and not into traffic; I can’t lip-read with superhuman accuracy, or even at all, really; I cannot climb a 500-ish foot elevator cable; I can’t speak every language fluently and with no tell-tale accent; I can’t pick locks with, you know, like, a potato; I definitely can’t run around having adventures with my long hair flopping beauteously in my eyes (This is one of my least favorite action movie tropes. If she were in a shoot-em-up adventure chase, she would tie her hair back. For the love of god, TIE HER FREAKING HAIR BACK!); I can’t imitate other people’s voices; I can’t win a fistfight against Philip Seymour Hoffman. But do you know why this mission would have been flatly impossible for me? It’s because of that moment at the very beginning when Ethan receives his instructions. “Sylvester McMonkey McBean is tied up in a third-story bathroom at 1465 Succotash Lane in Saskatoon, Saskatchewan and must be rescued within 24 hours, after which you must call Virginia Cadwalader Throttlebottom at o11-33-3456-46747-343 and tell her to wire $349,000,005 EXACTLY to bank account 56534-4535 at routing number 129543230. This is your mission, should you choose to accept it. This directive will self-destruct in five seconds.” What? Five seconds!? Wait! Where am I going again? Shanghai? How much money? Who? WAIT! And then, *poof*, the message self-destructs.

Seriously, I think the most impossible thing Ethan does during his impossible missions is transfer random names, numbers, and places from his short-term memory to his long-term memory with no problem, even when drugged or under duress.

Anyway. The movie was fun, it was what it was, and it was slightly less insulting than most “rescue the beautiful, helpless woman who didn’t know you were a secret agent but will love you anyway despite your lies leading to her being kidnapped and nearly killed” plots. (Sad, how low your standards drop and how little agency the beautiful, helpless woman has to have for you to feel like the movie is better than average.)

At the end of the episode, Joey comes into Rachel’s apartment, nearly in tears, because Beth is sick and not getting better. And so Rachel and Joey put Little Women in the freezer so that Joey will feel less scared.

Joey always was my favorite of the six friends. 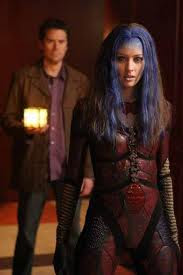 And! I watched more Angel Season 5. There’s a LOT of good stuff in Season 5. Even some of the things I was meh about in previous seasons improve in Season 5. For example (spoilers!), Wesley‘s a complex, super-interesting character (so funny and goofy, so dark and occasionally horrible), but I’ve never really been able to care about his unrequited love for Fred, because I’ve never been able to convince myself to care about Fred. If I’m going to get behind a super-smart but frail female Whedon character, it’s going to be River Tam every time, never Winifred Burkle. But then — Fred turns into Illyria! Illyria never simpers, she is no one’s second fiddle, and her relationship with Wes is so much more interesting than Fred’s. I like the blue look, too. Good job, actor Amy Acker (say that 10 times fast). And good job, Alexis Denisof, too, of course. I wonder if he ever won any prizes? He does a great job with Wesley.

I also read Mockingjay, by Suzanne Collins. No spoilers here, I promise; I’ll only say that I loved it. And some of my friends didn’t; I’m looking forward to those conversations. I’ll link you to a couple places where the book is reviewed or discussed — note that you WILL find spoilers in both of these places. First: I like how Kirkus dealt with the Mockingjay embargo, and I agree with their starred review. And second: I’ve been enjoying the Mockingjay discussion taking place in the comments at Roger Sutton’s blog.

I also read, and recommend, this article in the Huffington Post: “Jodi Picoult and Jennifer Weiner Speak Out on Franzen Feud.” I doubt that many people in children’s literature will be shocked by the suggestion that The New York Times Book Review can be condescending to those written genres that are not literary fiction?

Lest you think I did nothing but read and watch my TV this weekend (not that there would be anything wrong with that), I also went to a park I hardly ever go to, and sat on a bench. It was peaceful, and then an amazing thing happened. You see, there are 3 writing projects I’m really excited about diving into once I finish Bitterblue. On Saturday on my bench, I suddenly realized that two of them are the same project. Two different books melded into one, and I started to have IDEAS. The ideas were tugging at me… I began to jot them down… and then, eventually, I noticed that the ideas and I had switches places and now I was tugging at them, and at that point, I stopped myself and went away to do something else. Because I’d crossed over from rest to work — from input to output. It’s a blurry line sometimes.

One of my books has received a very nice honor in Italy: young readers chose Graceling as their favorite book in the “terza media” category for the Xanadu prize. Thank you, Italian readers! If you look at some of the other winners in other categories, you’ll understand why my Italian editor asked me if I ever imagined I’d win a prize along with Jane Austen. :o)