My Finnish translator, Maria Lyytinen, has one gray eye and one brown eye. She’s a Graceling! Kiitos for translating my book, Maria — I can’t imagine anyone more appropriate! :o)

The Simmons Summer Institute is this weekend; I speak Friday, which I’m very grateful for, because it means I’ll be able to enjoy Saturday and Sunday events, rather than rattling around like a nervous wreck. The schedule is here.

And now, I’d like to try something new. Since I just moved, I am, of course, unpacking… and this gives me a new appreciation for my belongings. So I had this idea: why not subject my innocent readers to A Gallery of My Favorite Objects? BWA-HA-HA-HAHAHAHA! As I unpack them, I’ll take pictures of them and post them here. Now, a couple things about my gallery. One, the only camera I have is on my iMac, and I like it that way, so that means there are limits to what I can photograph. For example, I’m rather fond of my couch, but I’m not going to drag it into my office so that I can take a picture of it. So, really, this is going to be a gallery of my favorite mobile and light objects. Two, if I get too busy, this may end up being a gallery of one photo. :o)

Today’s favorite object: the world ball! I bought the world ball (which is technically an inflatable globe) in Cambridge, Mass about 6 years ago, and it has lived in Boston, London, Austin, and the-middle-of-nowhere Pennsylvania — and Jacksonville, Florida, where it had its best life, because my sister (secret codename: Cordelia) and I developed an excellent game (called World Ball) which involved trying to kick the world ball really hard past each other, something like soccer/football, but with no definable goal, and in an apartment full of breakable objects. Our aim was excellent. I think we only broke seven or eight things.

I give you: the world ball! 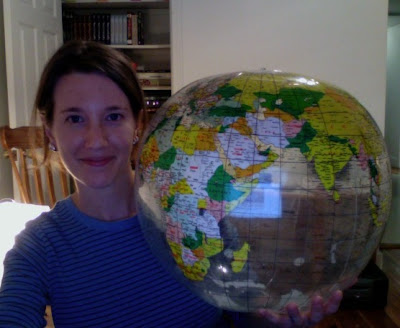 Incidentally, if you can see the ink all over my fingers, it will answer a recent FAQ, which is, am I left-handed or right-handed? I’m a leftie.

Want to tell me one of your favorite objects?