Warning to the acrophobic (and to my mother): This post contains trapezey photos!

So, I really do think that trapezing is the perfect extracurricular activity for the writer — for two reasons. One: trapezing is completely different from writing, and therefore, it’s the perfect break. When I’m writing, I’m sitting in a chair, I’m racking my brains, I’m ALL in my head, thinking, thinking, thinking. I’ve got a great connection between my brain and my left hand, but beyond that, I’m kind of physically oblivious. I’m so out of touch with my body sometimes that I get mad when I realize I’m hungry (what, I have to feed myself AGAIN?). Or, I find myself in another room, and can’t remember how I got there or why. Nothing could be more different from this than jumping off a platform, swinging through the air, leaping off the trapeze and being caught. As I’ve mentioned before, when I’m at a trapeze class, I don’t think about writing, not once.  I’m in my body, and my writing brain is turned off.  It’s a blessed and relieving break.

Two: trapezing is exactly like writing.  By which I mean… well… the other day, I was standing at the top of the board, and my instructor, Kaz, was explaining this new trick to me that I was about to do for the first time ever. “When you hear the word ‘pullover,'” he said, “you’re going to swing your legs all the way up over the bar so that you’re on top of the bar and the bar is against your stomach.”

“I’ll show you,” he said. He took hold of the trapeze, swung out, and swung his legs up over the bar; then he perched there on his stomach on top of the bar, like a magnificent bird.

When he came back and landed beside me, I was like, “I’m going to do that?” (I’m very eloquent at trapeze class.) And the thing was, even having had it explained, and even having seen it — and Kaz both explained and demonstrated several times — I still couldn’t understand what it was I was supposed to do, and I especially couldn’t comprehend how I could possibly be capable of doing it. Which meant that there was only one option left: I had to just swing myself out there and try it. I’ve found that with trapeze tricks, it isn’t until I’m actually DOING it — and probably doing it all wrong — that I begin to understand what it is I’m supposed to be trying to do. That moment when you just go ahead and jump off, just swing out there despite the fear, with no real sense of whether you can do it, or how it will feel, or whether it will hurt, or even, really, WHAT IT IS? That moment is EXACTLY like writing.

Now, before we get to the picture portion of the post, here, for your edification, is what a pullover is supposed to look like. Scroll to the bottom of the page and watch the 10-second video. Sorry there’s no catch — you’ll have to imagine someone plucking her out of the air after her release (see the empty catch trapeze there on the left side of the frame?). I really recommend you go watch that video and see what it’s supposed to look like, so that you can better appreciate, um, the way I do it.

So, here I am. I have no idea what I’m about to do, LA LA LA THAT IS NO REASON NOT TO PROCEED. 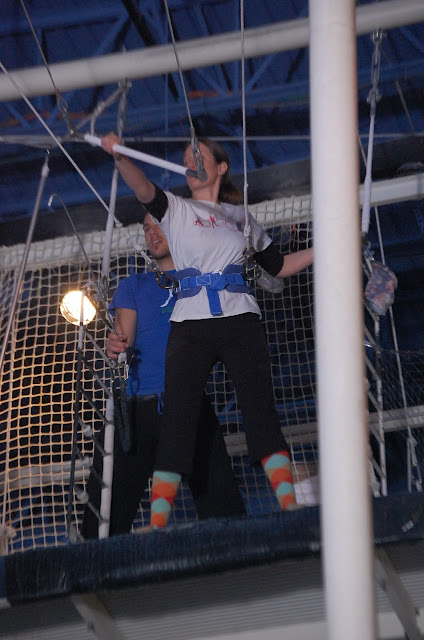 Huh. Here I am, swinging my legs over the bar, just like he said. How about that. 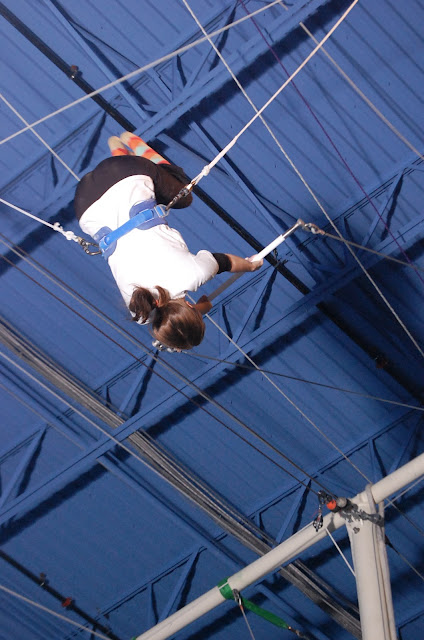 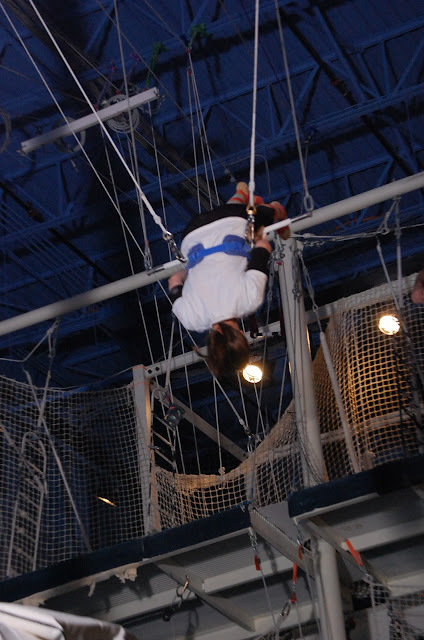 That intense jarring sensation was probably me falling out of position, huh? 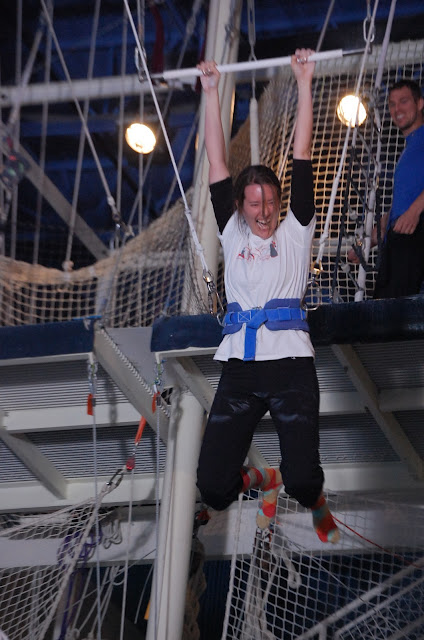 If at first you don’t succeed…. Getting into position a second time.… 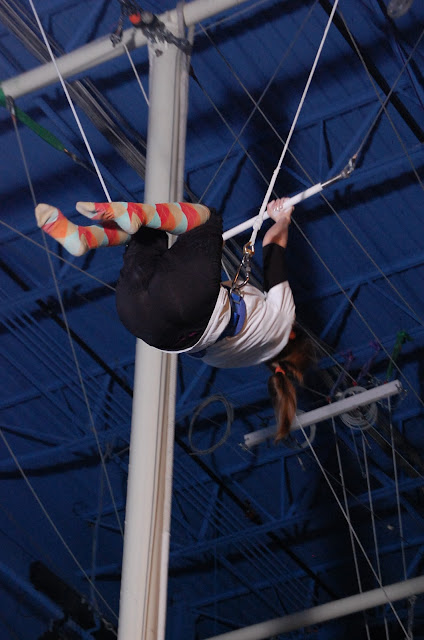 Hmm. I’m pretty sure that when Kaz showed me how to do this trick, he was never UPSIDE-DOWN. In fact, I’m pretty sure I’m not supposed to be able to SEE Kaz right now, yet there he is.  What the hell is going on? I don’t supposed there’s any chance I’m perched like a magnificent bird? 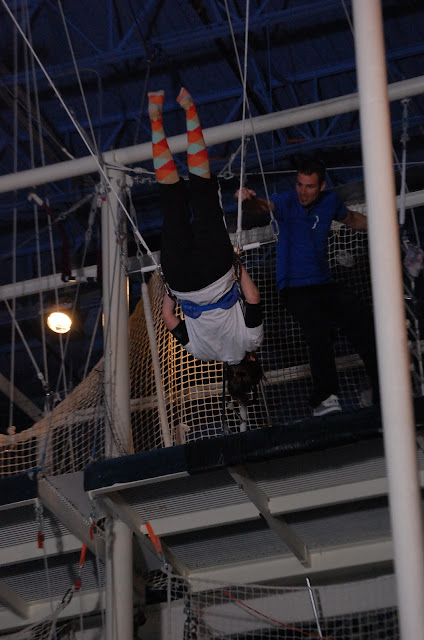 And I’ve fallen out of position again.  Sigh… 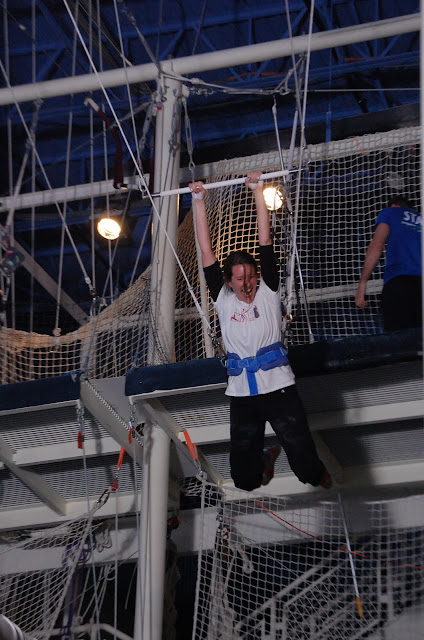 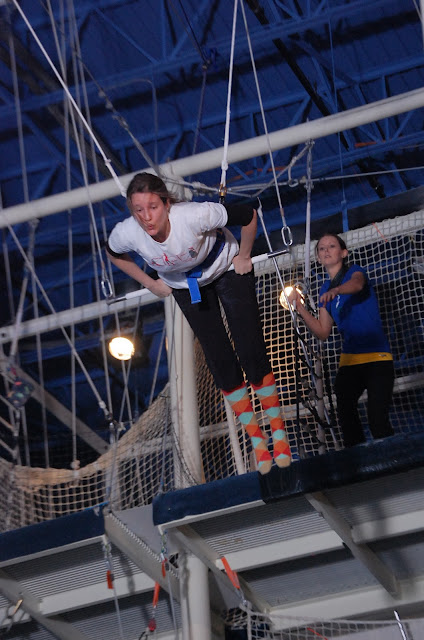 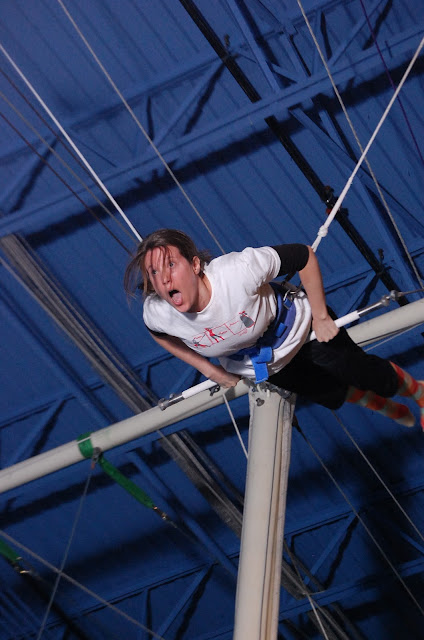 LOOK AT ME! I’M A MAGNIFICENT BIRD! 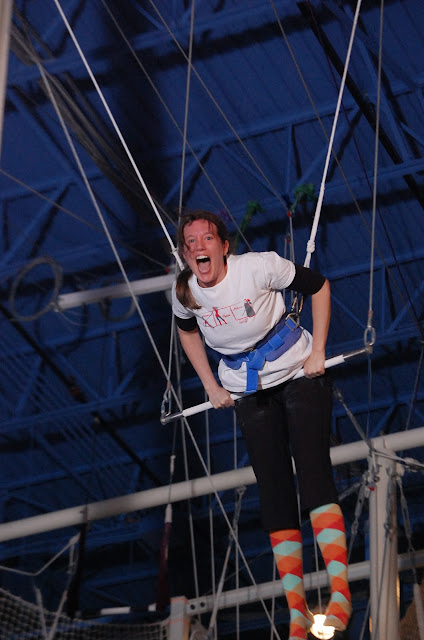 Okay, okay, I know I’m not REALLY in position yet… PUSH those arms… 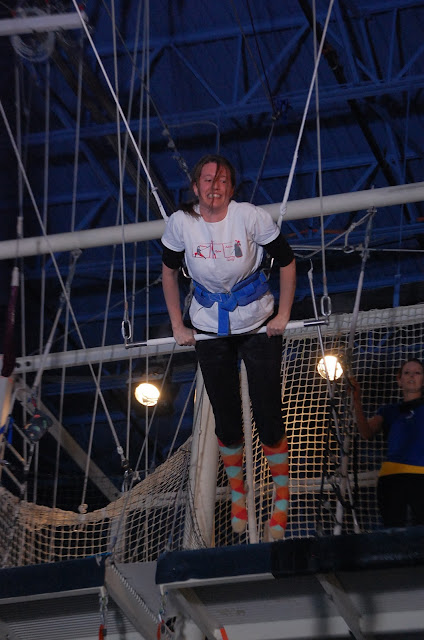 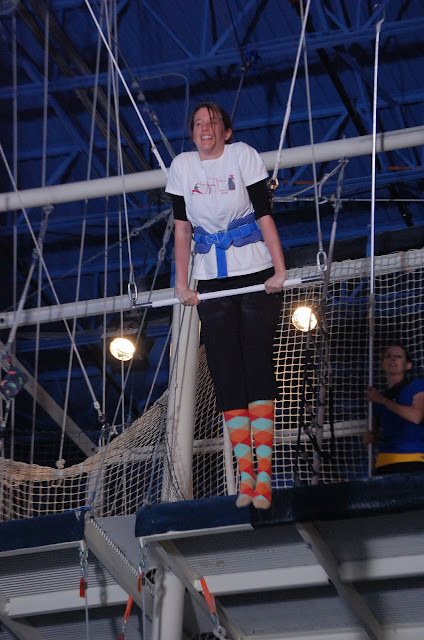 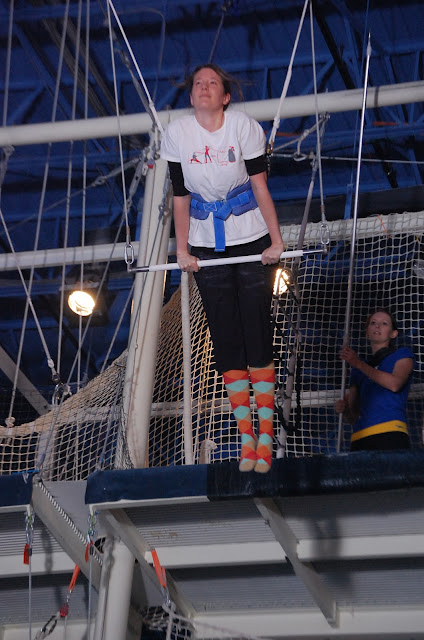 So. There you have my first few attempts at a pullover. (Sirens 2009 attendees – recognize my shirt? I wore Kel/Katsa/Mel for courage!) As it was evident by the end of the class that I am nowhere near being ready to catch this trick, I caught a set split instead, the sloppiest set split ever, but we caught it four times and it was totally fun. Here are a few photos of the catches:
Hep! 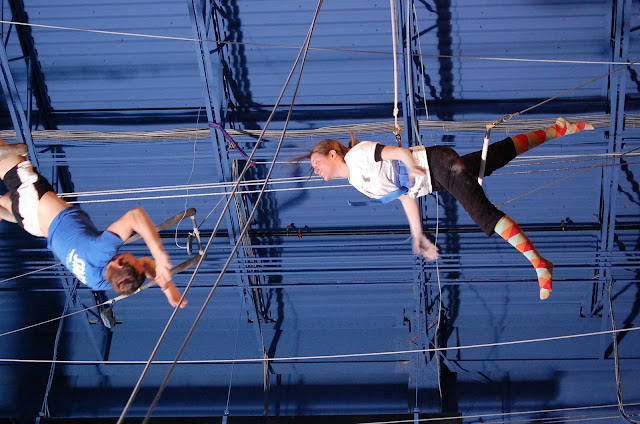 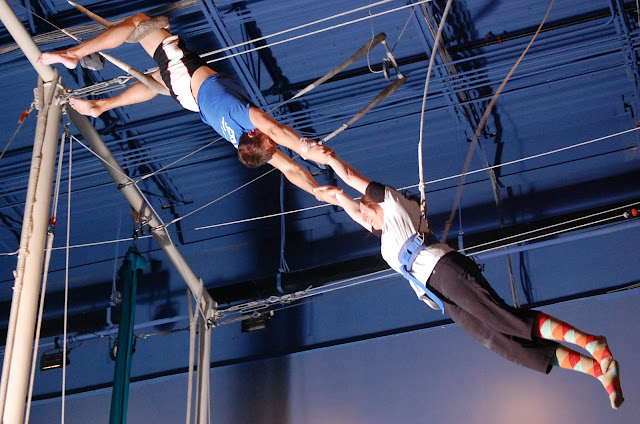 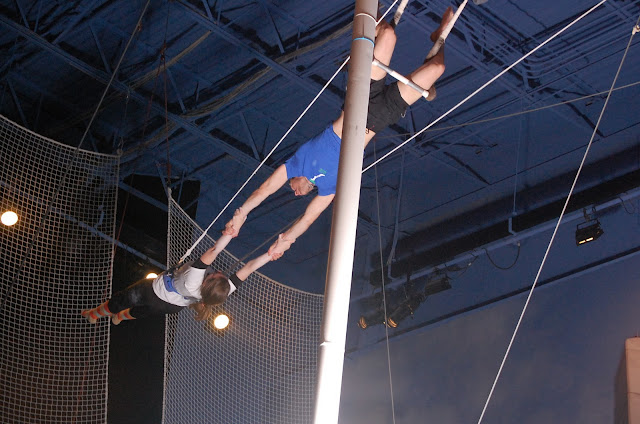 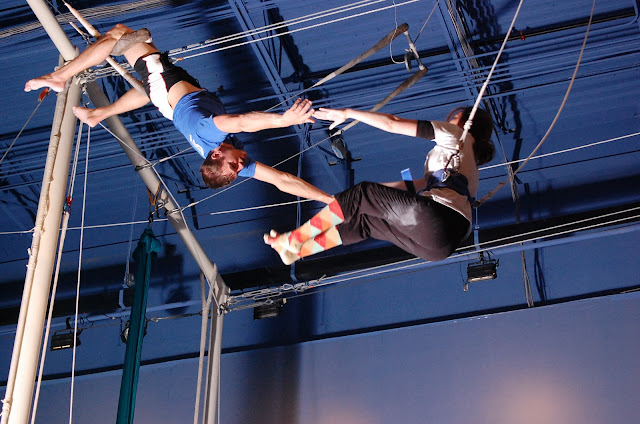 And one more. The flash didn’t go off for this picture, but I’m including it anyway, because I kind of like the way it turned out. 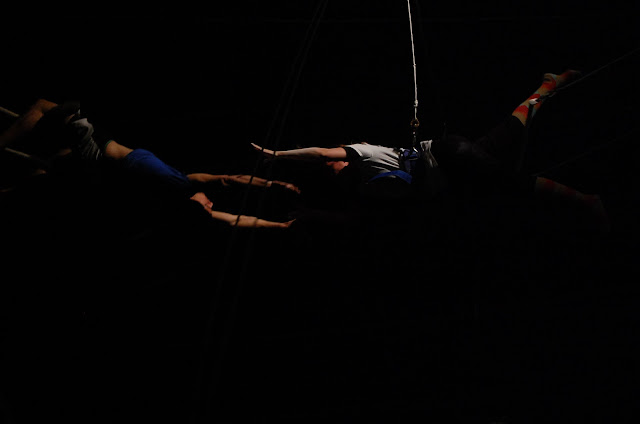 This was my first flying class in a while. I messed up every single one of my tricks in one way or another, but nonetheless, it was one of the most fun flying classes I’ve ever taken. I’ve never laughed so much while swinging as I did while trying to figure out how the hell to do that pullover. I’m determined to figure it out, because I can tell it’s going to be a super-fun trick.

Anyone out there wanna try? TSNY has locations in Boston, New York, L.A., and D.C. and there are lots of classes for beginners. They also teach classes in silks, trampolining, and static trapeze. I am not an athletic person, and I love it — the classes are tailored to your own abilities and pace. I expect it’s going to take me a whole bunch of classes before I’m able to do (let alone catch) a pullover. Though hopefully not as long as it takes me to write a book. :o)

Thanks to my instructors, Wendy, Erin, and Kaz, for a great class; thanks to Kaz for catching and Erin for pulling lines during my sloppy set splits!; and thanks to Molly for taking such wonderful pictures (and pointing out my pensive expression :D).