So, at TSNY Beantown (the trapeze school), there are signs that say, “Forget fear. Worry about the addiction.”

I had my second flying trapeze lesson last week. (If you missed my first, I talked all about it here.) Click on the photo below to see just how silly that silly face is: 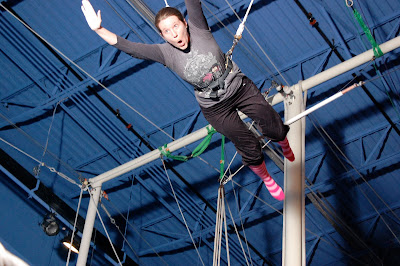 (The white bar near my left foot is the trapeze I’d just sprung off of.)

Today I’m going to be explainy about the trapeze, what it’s like, how it works. In addition to a staff member helping you on the platform and one on the floor who is both calling commands and managing your halter lines, there are two people taking part: the flyer, who is you; and the catcher, who is a professional, and who sits and swings in what is called the catch trap. Basically, in every class, you, the flyer, are learning a specific flying “trick.” For the majority of the class, you’re working on your trick by doing a lot of practice swings without the catcher. The goal is to get good enough at the trick that by the end of the class, you can do it with the catcher, who will try to “catch your trick.” In each of my two classes so far, I’ve had four practice swings, followed by two complete (and fabulously fun) catches.

The trick I learned in the first class is called the knee hang. Rather than trying to explain it, I’m going to send you here and, if you’re curious, suggest that you scroll to the bottom and watch the 45-second video, because a moving picture is worth a bazillion words. The catcher is on the left, the flyer on the right. The video is exactly what I learned to do in my first class, except that this flyer does an extra swing at the end with the catcher, plus, I was wearing a halter to prevent, you know, death.

The trick I learned last week is called the heels off, and there’s a 15-second example of that if you scroll to the bottom of this page here.

(Just to be clear: those videos are not me, and those locations are not TSNY Beantown.)

I’m going to talk a little about what this feels like, and I’m going to explain it in the first person, because I don’t assume that everyone’s experience is just like mine. For one thing, I kind of love heights. I have utter respect for people who don’t do heights, and I’m guessing this would be a very different experience for them! Also, I’m not an athlete. A highly athletic person — especially a competitive diver, a gymnast, etc. — would likely tell a different tale.

So. Here’s a super-cool thing I’ve learned about the flying trapeze: at the moment when I’m doing the physically hard things, like swinging my legs or heels up onto the bar, I am at the apex of my swing — the most weightless moment — AND I have the momentum of the swing working in my favor. As a result, those motions are not actually physically hard! That doesn’t mean that I’m not sore the next day, from using muscles I don’t usually use and from stretching muscles that are seriously not used to that much stretching — because as you swing through the bottom of the swing, your body weighs several times your static weight, and that creates quite the stretch! Also, it doesn’t mean that it’s not hard in other ways. The first time I climbed to the top of that platform and understood what I had to do, I was scared. I wasn’t sure I was going to be able to do the movements they were asking me to do; it was not reassuring that the rig shook, or that one after another, I watched the people ahead of me in line jump off the platform and swing away into a void; and, when it was finally my turn, it didn’t help that the process starts with you leaning out over the edge of the platform to reach for the trapeze, the only thing keeping you from falling being the person behind you who’s holding your belt. (And don’t forget, I say this as a person who likes heights.)

Once I was finally swinging, it felt so much better — jumping and swinging is FUN. And like I said before, the things I was afraid would be hard weren’t, plus, the instructors have a very calm, commanding, and reassuring way of telling you what you need to be doing at all times. But there’s still fear sometimes, even when you don’t realize it. With my heels off trick in particular, on my first few swings, I wasn’t getting off the trapeze fast enough at the end, until one of the instructors told me to be more aggressive. His comment got me going through my last swing in my head, trying to figure out why I wasn’t being aggressive. At first I assumed that it was my lack of strength and athleticism — and maybe those things were factors — but then it occurred to me that maybe my bigger problem was fear. Watch the heels off video one more time and notice how the flyer only sees the catcher in the moment in which he’s being caught. When you’re doing the heels off, you’re basically looking at your own knees as you swing through the air, and then suddenly you need to let go and burst off the trapeze in a straight line, into thin air — which, under most circumstances, is an activity that would generally be followed by falling and death, ya know? Unless there just happens to be a guy who swings along and plucks you out of the sky? Or a person on the ground holding your halter line? Or a net beneath you? I think my fear was keeping me from trusting in the guy and the person and the net, and was causing me to be too cautious — hang on to the bar a little too long, unfold myself a little too slowly.

Anyway. Realizing this was a revelation for me, because while I couldn’t do much to change my strength or athleticism before my next swing, I could deal with the fear. I’ve talked about fear on this blog before, especially when it comes to writing. Fear likes to keep writers company while they write, trying to convince them that they’re going to fail. Whatever. He can hang out with me if he wants, but I’m never going to let him stop me from writing. And once I knew I was dealing with fear in my heels off, I realized I just needed to do it and damn the torpedoes, just like I do with the writing. Fear can swing with me, but he can’t stop me from flinging myself into thin air. Next time up on the trapeze, when I heard the command, I exploded off that bar as fast as I physically could — and apparently it was good enough, because when it was time to try it for real with the catcher, we made both catches. Yay!

If you feel like a wimp or like a person with no courage, don’t forget that sometimes, courage feels just exactly like being terrified. The photo above is proof, actually. That’s me practicing exploding off the trapeze. In addition to looking very silly indeed, my face also looks scared, doesn’t it? But do you see what I’m doing? You’re not going to tell me that throwing myself off the trapeze into the air was a cowardly thing to do, are you? In determining whether you’re courageous, what matters more, how you feel or what you do?

I have more to say about trapezing. About the trust factor — especially trusting the catcher, who is calling the shots. About how it doesn’t matter how well you do your trick, because nothing terrible is going to happen if you don’t get your legs or your heels up, or if you miss your catch, or dismount awkwardly. The halter and the net and the people around you keep you safe and you learn your own limits. But maybe I’ll save that blog post for after my next lesson.