(With apologies up front to my readers who are not American or are too young to vote. I must write this post — but I promise, I’ll only do it once.)
So. I am not, nor have I ever been, politically eloquent. If I relied on my own powers of persuasion to explain to you why I think it’s imperative that you vote for Barack Obama this November, my argument would be something along the lines of, “Please, please, PLEASE vote for Obama so that we can work toward expanding civil liberties rather than restricting them, so that the earth can be better-protected, and most importantly, so that we’ll have a leader who believes in looking outside himself and outside of US.”

The problem is, those are only a few drops in the bucket, and vague drops at that. What I’d like to do in this post is present you with the arguments of a few very cool people who say it way better than me. I promise you, none of the arguments are terribly long, and you can pick and choose which ones to give your time to. I’ve even divided it into numbered sections and/or written small previews, so you can skip around and see what looks interesting to you. Plus, at the end, there’s a reward! :o) Okay, here goes.
1. YA FOR OBAMA — VARIOUS VIEWS FROM ELOQUENT FOLK
Have you checked out the blog YA for Obama, at which various YA writers express their reasons for supporting Obama?
In this post, Sara Zarr (author of Story of a Girl and Sweethearts) introduces herself as a theologically conservative Christian from Utah who hates politics and is a total cynic. And yet, she’s been politically inspired by Barack Obama — and frankly, her explanation here is inspiring. I recommend this one highly.
In this post, Scott Westerfeld (author of Peeps, the Midnighters series, and the Uglies series, among other things) presents some hard facts demonstrating that Democrats have a better track record when it comes to running the US economy than Republicans do.
In the same post (just scroll down), Cecily von Ziegesar (creator of the Gossip Girl series) addresses the question of whether Barack Obama is a Nate, a Dan, a Chuck, a Serena, or a Blair. Umm. This is not the sort of argument that would necessarily sway me, particularly since I don’t remember who any of those people are, but I’m trying to present something for everyone here, so there you have it. :o)
In this post, Lauren McLaughlin (author of Cycler) explains — very, very well, in my opinion — why “the reasonable and moderate position on the subject of abortion is, in fact, the Pro-Choice position.” If you are considering voting for McCain solely because of his stand on the abortion issue, I beg you to read this post. And to remember that matters of education, health care, immigration, war, and environmentalism are also about valuing human life. (Please don’t make it a one- [or two-, if you want to throw gay marriage in there] issue election!)
There’s more at YA for Obama; this is just a sampling. If you like what you’ve read, explore it some more!
2. THE MATTER OF SARAH PALIN
Next, I’d like to excerpt a few lines written by a friend of mine, secret code name: Agent Kumquat, currently doing humanitarian work in India. To help you decide if you want to take the time to read it, Agent Kumquat writes about the importance of the USA’s position internationally, and the danger of electing a person with Sarah Palin’s lack of international (and general) experience to such a high office:
“The past 8+ years I’ve spent living and working overseas have given me a different perspective on the US, and a different appreciation of how our political leadership sets the tone for how U.S. citizens are perceived overseas, on a individual as well as “national” level. The actions of the Bush Administration over the last 8 years have made the work of humanitarian organizations like my own more challenging, and, frankly, more dangerous. In our inter-dependent world, the opinion of other countries DOES matter. Our leaders’ ability to intelligently dialogue with leaders of other nations DOES matter. Their skill and ability in analyzing and demonstrating an openness to weigh the concerns and interests of other nations DO matter. It is NOT acceptable for someone who needs a crash course in contemporary international politics and US foreign policy to be sitting in the office of the 2nd highest elected official in our country…. I certainly hope that 8 years of a president who was “one of the guys”, someone people in the US perhaps could relate to as a normal, down to earth kind of guy, have been enough to disabuse us of the notion that our elected leaders should be drawn from the ranks of the “ordinary”. Don’t we want leaders who are EXTRAORDINARY, who are smarter than us, more experienced than us, able to keep track of information and formulate and express their ideas and vision for our country in ways we never could?… John McCain may have these characteristics and experience; Sarah Palin most certainly does not. However sympathetic a person she may be, however much people feel they can relate to her, however much she comes across as a breath of fresh air from outside of the “establishment”… she is simply not equipped for the job…. Whatever you may feel about John McCain, the presidential ticket is a two-fer…. In voting for John McCain, you will get Sarah Palin, and the not far-fetched prospect that she could at some point be called upon to serve as the leader of our country…. As I think about how our country can rebuild its image in the eyes of the world, revive its economy and sense of hope about our place in the world, my fervent prayer is that all those who vote in November reflect on what voting for John McCain truly means – namely, Sarah Palin as Vice President.”
3. THE MATTER OF JOHN McCAIN’S AGE AND FAILING HEALTH
Speaking of Vice-Presidents stepping up to become Presidents: Are you aware that John McCain is 72 years old (which would make him the oldest person ever inaugurated as President) and has been diagnosed with invasive melanoma in the past? I wish this were The West Wing and President Bartlet, but it’s not — it’s reality, and unfortunately, we need to consider these things. See more about McCain’s health (including a short video) here. (with thanks to Lora!)
4. ATTITUDES ABOUT THE ENVIRONMENT
Have you seen this visual? (With thanks to writer Sandra McDonald!) 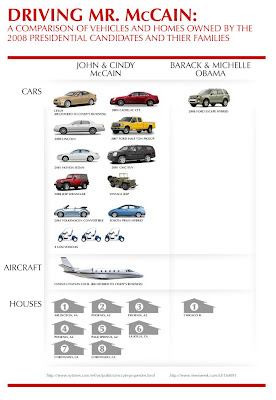 Finally! If you’re still with me, you deserve a reward. So — did you see Saturday Night Live‘s version of the VP debate? Seriously, one of the best satires I’ve ever seen them do…
PLEASE PLEASE PLEASE VOTE FOR BARACK OBAMA!
(Btw, you can get the bumper sticker above — “I love my country…” — at the Syracuse Cultural Worker’s Tools for Change.)