A friend recently told me that she can’t bear the flying trapeze pictures on my blog, and was even starting to wonder if she was going to have to stop reading my blog because I kept springing trapeze stuff on her. You know, here I’ve been, completely oblivious in my love of jumping off things, not even realizing that I could be causing problems for my readers who are afraid of heights. I really am sorry! From now on, any trapezey posts will start with a warning of trapezey things ahead.

This post is NOT about the trapeze…. this post is about… I’m not sure, exactly. There’s a lot going on these days, and I’ve been feeling ruminative. (Not to be confused with feeling ruminant.)

There were a lot of cows where I grew up. My favorite thing was walking past them while they stared at me intelligently, unmoving, with grass hanging out of their mouths. Every once in a while, one would move, and you would feel as if you’d been let in on some rare secret cow undertaking. Once I saw one running, nay, BOUNDING, across a field, and I almost fainted. I consulted my sisters afterward. We all agreed that that particular cow had to have been two guys in a cow suit.

There’s always a lot going on, and I’m always feeling ruminative, but there’s been a special extra level of rumination lately, partly because of a confluence of family and friends, partly because I’m about to embark on a huge trip, partly because of the trapezey stuff, and largely because……. well, here I am, still working hard, every day, at Bitterblue. She’s not finished, but every day, she’s closer to finished than she was yesterday.

Bitterblue, unfinished, has already taken me longer to write than any other book I’ve ever written. Today, just out of curiosity, I decided to figure out exactly how long she’s taken so far. I went to my writing closet and collected her.

Bitterblue in progress, in her various forms: 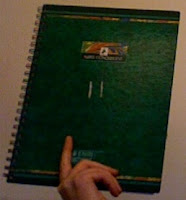 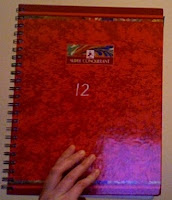 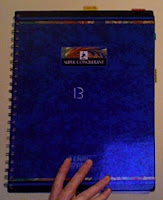 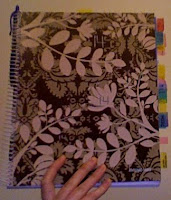 I remember that day. The next day, I got in my car and drove 800 miles all by myself. (Not randomly. I had a particular destination.) I’m positive that the only reason I was able to drive 800 miles in one day is because I was experiencing temporary superhumanity on account of the adrenaline high from just having finished THE DREAD BOOK.

Turn to the next page in Notebook 10, and it’s October 22, 2007. (What was I doing from October 13 to October 22? Revising and transcribing the ending of Fire.) On October 22, I wrote a list called “What I Know For Sure” (meaning, what I knew for sure about Bitterblue at that point). It’s not a very long list. And then, on October 24, 2007, I wrote the first lines of Bitterblue. The book grew, very slowly; I wrote steadily; and before too long, on November 21 and 22, I wrote page after page of planny stuff. I remember November 22. I’d gotten far enough along in my opening pages to start to see the holes in my plot that needed some filling before I could continue, so I got a sandwich at Publix, filled my thermos with tea, bundled up, and went to the beach (in Northern Florida, not, like, Maine!), where I sat until I figured some things out. It was WINDY and I was the only one there. I and the pelicans. It was one of the best Thanksgivings I’ve ever had. :o)

On December 8, 2007, I seem to have started the book all over again, because I see the first lines of Bitterblue again, and they’re a lot closer to how they read now. And from then on — with breaks for Fire revisions and book travel — I wrote steadily through three more notebooks, and I’m still writing, now in Notebook 14. Before Bitterblue, the longest it ever took me to write a first draft was a year and a half. My keen deductive powers lead me to conclude that I’ve now been writing Bitterblue for just over two and a third years, and I’m still going. Why is it taking so long? Well, is there some reason it shouldn’t? Some reason that actually has anything to do with how books are written, anyway? Every book is different. Bitterblue is longer, more complicated, and more ambitious than anything I’ve ever done. A book takes a long time.