It’s October…. so we did Boda Borg! Without a doubt, one of my favorite monthly new things so far. Oh my gourd, it was fun.

What’s Boda Borg? I’ll explain best I can, but first, for those readers who know what it is and are worried that this post will contain clues or cheats, I promise it doesn’t. It does contain some photos from inside the Boda Borg rooms, but I’m confident the photos are vague enough that they don’t give much away that isn’t already obvious.

BTW, Swedish Graceling cover —–> Because Boda Borg comes from Sweden! Follow that link for locations and other good stuff. Here in Boston, we’re lucky to have the only stateside Boda Borg facility.

So, first I’m going to share the official definition of Boda Borg, then I’ll describe what it’s actually like. Officially: Boda Borg is a real-world gaming environment. Teams of 3-5 people move through a series of “Quests,” tackling a variety of mental and physical challenges. Success in the first challenge means entry into the next challenge and so on… Failure in any challenge means starting over or selecting another Quest.

What it’s actually like: You form a team of 3 to 5 friends. You enter the facility, which is a series of corridors full of doors. You choose a door, enter a room… and once you’re in the room, you have to figure out how to successfully “win” in that room. There’s a time limit; every room contains some sort of puzzle or challenge; and it’s rarely clear what the puzzle or challenge is. So, it isn’t just a matter of performing the challenge in the allotted time; it’s a matter of figuring out what the challenge is to begin with. Stepping in the wrong place by accident because you haven’t figured out what the challenge is yet could make you fail the room. For example, there are some rooms that have to be crossed without anyone ever touching the floor, so the moment you step into the room, you fail. You quickly learn to peek your head in and take a good look around before stepping in!

If you do successfully win in a room, you pass through another door (or hatch, or hard-to-get-to opening) that leads to another room… where again, you have to figure out the challenge, then execute it, in the allotted time. At Boda Borg Boston, there are about 13 separate Quests, and each Quest contains 2 to 4 rooms. You’re never inside any Quest for very long, because each room has a two-minute time limit.

Each Quest has a theme. (Learn more about the individual Quests here.) I took these pictures out in the corridor, as we waited our turn to enter…

The Quest doors in the corridor are green, red, or black. The green doors lead to mostly mental challenges; the red doors to a mix of mental and physical; and the black doors, to the most physical challenges. Here are some pictures from inside the Quests, though I’m not going to identify which Quests they are, for those of you concerned about clues.

You need at least three people, in different positions at different times, to win most of the rooms. And there were a number of rooms I couldn’t even have gotten through without the helping hands of Irina, LuQ, and Kevin. Over the course of about five hours, we tried almost all the Quests and successfully completed a few. But more often than not, we were met with the glowing red eye of failure… 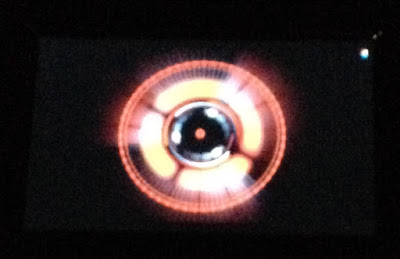 Superbanan was my favorite Quest. We only managed to complete the first room, but it was SO satisfying!

What made it so fun? For starters, the joy of crawling, sliding, and climbing; the warm fuzzies of teamwork with friends; the satisfaction of successfully achieving things I was initially certain I couldn’t achieve; the delight of how smart my friends are; that feeling of, “We can figure out how to do this.”

I recommend the all-day pass (so you can stay for as long as you want), and most especially, kneepads.

That was our new thing for October! And stay tuned, because November is going to be awesome.