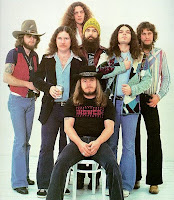 So, Lynyrd Skynyrd was at my gate at the airport on Friday morning. This did not make up for the fact that Delta was in an enormous snafu such that all flights were delayed and I couldn’t make my connecting flight and there were no seats on any later flights that could possibly get me to South Bend in time for my cousin’s wedding party on Saturday. Even if I flew through Cincinnati instead of Atlanta. Even if I tried my luck and flew standby. Even if I went home and came back later. No flights. Nada. Nichts. Niente.

I was somewhat astonished — I’ve had long delays and reroutes before, I’ve been stuck in Chicago due to blizzards, I was stuck in LA once due to a volcano in New Zealand, but I was always able to go where I needed to go eventually. But not this time. So I left the airport, got back in my car, and drove home, because there was nothing else to do. I went to the bagel store and got the bagels I’d failed to get on Wednesday. I went to the grocery store and got some consolatory ice cream. While I was sitting in the parking lot I saw Cordelia walking down the street with a cup of coffee. Ah, yes, I thought, there is Cordelia with a cup of coffee. I am definitely not in South Bend.
I was too depressed to attract Cordelia’s attention. Besides, it would’ve confused her mightily, since not half an hour earlier I’d been texting her from the airport about how Lynyrd Skynyrd was at my gate, and for all she knew, I was now in a metal tube winging its way across the sky, sharing my peanuts with Lynyrd Skynyrd. Instead, I texted her later in the day telling her I’d seen her from the airplane carrying coffee down So-And-So Avenue at so-and-so hour, wearing shorts and a green hoodie. I mean, why be merely confusing when you have an opportunity to seriously mess with someone’s head?
Anyway. So, my weekend didn’t turn out the way I was hoping… and Annie and Henry, if you’re out there somewhere reading this, I am so sorry I missed it. I was really looking forward to it. I did make the most of my weekend. I kept the away message on my email and the hold on my mail and pretended I was away, which was kind of fun. It was like being nowhere, in a covert and clever fashion. And I got tons of good work done. But. Wish I could’ve been somewhere. There, to be precise. :o(
(Delta, I’ve said it before and I’ll say it again: What your airline could use is a little CHANGE.)
(Also, Booklist gave Graceling a star!)