Hi everyone! What’s going on with you these days? Ready to hear my 4 for the win?
1. TWO OF THE WORLD’S BEST PUBLISNOODS
So, if you’ve been reading my blog for a while, you may recall my snood-ish battle cries, such as, OUT, DAMN SNOOD! and SNOOD, BE DAMNED!, invented by my Ladies of the Snood. Well, those ladies, Barbara Fisch and Sarah Shealy, former Associate Directors of Publicity at Harcourt Children’s Books, have launched their own company, Blue Slip Media, specializing in publicity and marketing for children’s books. Barb and Sarah are priceless. They’re talented, experienced, great at what they do, so much fun, and they always made me feel completely taken care of. (They once gave me the best tip ever for conquering the fear of public speaking: Just picture everyone in their snoods! HA HA HA HEE hoo) ANYWAY. If you’re in need of publicity work, hire them. (And don’t worry, they won’t come at you with snoodisms, that’s just me ^_^.) The website of Blue Slip Media is here, a Publishers Weekly article about how well they work together is here, and a PW article announcing their new venture is here!
2. BATTLE OF THE BOOKS
As it turns out, it’s an appropriate time for battle cries, because Graceling seems to be involved in some sort of smackdown over at School Library Journal‘s Battle of the Books. Basically, it’s 16 books, pitted against each other like basketball teams during March Madness, the victor in each match being decided by a single judge, the judges being some of the biggest names in children’s books. There’ll be four rounds. Here are the rules of the estimable contest and here is the schedule. And here is me enjoying it while it lasts, because, hello, in Round One I’m up against Kathi Appelt‘s National Book Award Finalist and Newbery Honor Book The Underneath, with Tamora Pierce deciding. Yikes! Seriously, this is such a hoot — check it out. The brawl begins on Monday.
3. I ♥ IOWA AND VERMONT
So, did you hear about how how Iowa’s supreme court unanimously overturned the state’s ban on gay marriage? And Vermont legalized gay marriage? People, it’s happening. The tide is turning. I’m so happy I could pop.
Remember the video I posted on Interplanetary Be Who You Are Day — the “Please Don’t Divorce Us” video — that made some of you cry? Well, watch this two-minute clip of Iowa State Senator Mike Gronstal explaining why he opposes any ban on gay marriage in Iowa. It might just also make you cry — but out of happiness and pride.
(In case you can’t watch the video, here’s the transcript.)
Thanks to my pal Deborah Kaplan for the links. Her excellent LiveJournal on librarianship and academia, fandom, F&SF, YA lit (lately, some great stuff about F&SF, YA lit, and authors of color), and OTHER COOL STUFF is at gnomicutterance.
4. PHOTOS FROM BOLOGNA
All taken by my Paris agent, secret code name: Bossy McLaine. 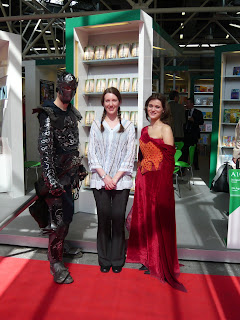 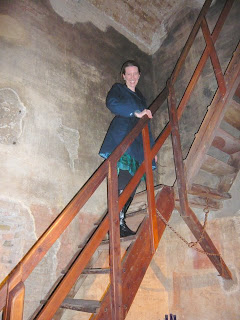 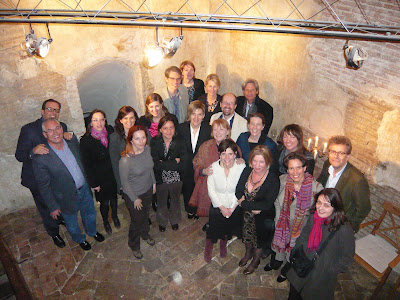 On top: My bodyguards and I at the De Agostini stand at the fair; me on one of the less perilous tower stairways. Underneath: EVERYONE AT MY DINNER — publishers, agents, scouts, and me!
Finally, I just want to say that my heart goes out to everyone touched by the earthquakes in central Italy. ♥