First, I recommend the show “Ocean Giants” on PBS’s Nature. It’s about HOW AMAZING WHALES ARE. (It’s also about how adorable whale videographers are, but I think that’s accidental.) Did you know that bowhead whales, which are only found in the Arctic, are believed to be capable of living 200 years? They are extremely wary of humans (unlike some other kinds of whales, like right whales). The narrator of the show speculated that this could be because some of them are so old that they remember the great era of whaling! In 2007, a living bowhead whale off the coast of Alaska was found to have a harpoon embedded in its neck blubber that was manufactured in the 1890s. Just think about that.

Next, Saturday was so dark that it didn’t seem like the sun was up at all, it was raining, and I woke up really needing to listen to Gustavo Santaolalla’s “De Usuahia a la Quiaca” (the link plays the song automatically). It’s part of the soundtrack of The Motorcycle Diaries, which is about Argentinian-born Che Guevara, so I can only assume that the title (“From Usuahia to Quiaca”) is referring to Argentina’s furthest south and north points. Google maps is stumped about how to get from one to the other. Why? Surely not that little bit of water? In these driving directions from Honolulu to Mexico City, step 13 tells me to kayak across the Pacific Ocean. So WHAT’S THE PROBLEM HERE? I wonder if Google has to have some sort of legal permission from a territory in order to be silly about it. Or something.

Anyway. A few weeks ago, I mentioned I was getting a new bookcase made to my specifications at The Door Store. I’m thrilled with the results, so thought I’d share them: 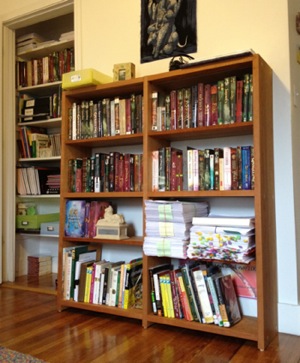 My Bitterblue manuscripts don’t actually live on this bookcase, but I piled them on, just to show you. 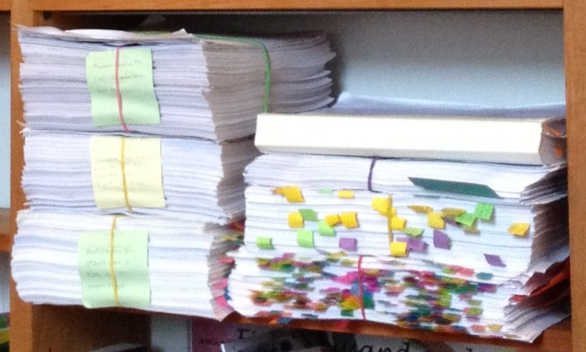 The left pile is versions one, two, and three. The right pile is versions four and five, plus the copyedit and the typeset first pass on top (both double-sided, which is why they seem so skinny). That’s seven versions before we reached the very final one, and by the way, my first serious revision was massive, less of a revision and more of a rewrite. Version 1 was almost 800 manuscript pages long (216,000 words); later versions were about 550 pages long. I could never have gotten to any of the later versions without having written the earlier versions. Every step in the process was necessary.

I wanted to show these so that the next time anyone is tempted to tell a writer to “write faster,” they stop themselves, consider how much work goes into a book, and instead, congratulate the writer for managing to do so much in so little time. 🙂