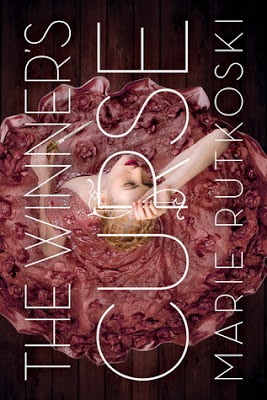 There’s a new book coming out on March 4 that I’m wildly excited about, because it is just so wonderfully excellently super-good… It’s called The Winner’s Curse and Marie Rutkoski wrote it. Those of you who read my blog carefully know that Marie is a dear friend of mine, so I wouldn’t blame you if now you’re thinking, Oh, sure, she’s going to say it’s wonderful, because her friend wrote it – or even, Oh, sure, she’s going to think it’s wonderful, because her friend wrote it. This sort of dilemma arises when one’s friend writes an amazing book: How to convince others that the book itself is amazing and I’m not just speaking out of love for my friend? Well, how about I bring in Kirkus Reviews to help me. From their starred review of The Winner’s Curse:

“Rich characterization, exquisite worldbuilding and rock-solid storytelling make this a fantasy of unusual intelligence and depth…. Precise details and elegant prose make this world fresh and vivid. The intricate and suspenseful plot, filled with politics, intrigue and even graphic violence, features neither heroes nor villains; every character displays a complex mixture of talents, flaws and motives. Kestrel is an especially compelling protagonist, both determined and hesitant, honest and manipulative, ferociously observant and painfully naïve…. Breathtaking, tragic and true.”

In case you’re wondering, all those parts in the middle that I didn’t quote are also glowingly positive. There isn’t a word of criticism in the entire review, which you can read in its entirety here. I LOVE THIS BOOK. If you’re eager for more details about what the book is about, I also recommend reading that review – it’s nicely detailed but also somewhat spoiler-sensitive. If you want some details but not too many, only read the first four or five lines. By the way, this book is classified as fantasy because it takes place in a made-up world, but it’s one of those fantasies which contain no actual magic. I mention this for the fantasy-phobes among you, although I suppose there’s a chance not many fantasy-phobes are reading my blog, unless of course they are masochists *cough*. Also, if you’d like to look at some beautiful, spoiler-free, moody images that create a sense of the book, check out The Winner’s Curse Pinterest board that Marie has created.

Marie is coming to Cambridge on her release day and she and I are going to have a conversation together at the Harvard Book Store at 1256 Massachusetts Ave in Cambridge (02138). On March 4 at 7pm. We’re tentatively calling it “Marie Rutkoski and Kristin Cashore: Secrets, Power, and Love in Imagined Worlds.” Yay! Please come!