Bombard its brain with cosmic rays.
redden its eyes with Mars —
set its tiny heart ablaze
upon a heap of stars.

I bought a burning hot banana from a bin in Indiana
with a burning hot and sticky splitting freckly yellow skin —
splotchy-rotten overripe — thick enough to clog a pipe —
when I think of it today I sweat and sicken from within.

Some of these poems actually had me howling. There’s one called “A Coarse and Common Carrot” and another called “The Alleycat Alley-Allocator Acting like an Alligator.” Others just left me wondering, thinking, smiling, like the series about solar bears, lunar foxes and moonwolves. This book is gorgeously published by The Porcupine’s Quill in Ontario and would make a beautiful gift; I wish I could convey the paper quality, the design, how well the art works, etc. on the blog. I’m hard on books — I turn down pages, break the spines, use them as placemats — but I found this one too beautiful to abuse. 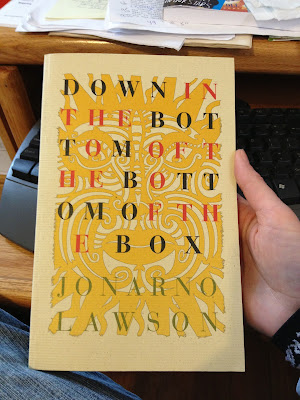 Thank you to JonArno for giving me permission to share a couple of his poems.

I’ve been listening to the Once soundtracks — both for the movie and the Broadway show — and thinking about that phenomenon wherein the song on an album that gets all the brouhaha and attention is hardly ever the song that stands out for me. Yes, “Falling Slowly” is a nice song. But I find “When Your Mind’s Made Up” and especially “Gold” SO much more interesting. I mean, come on people! It reminds me of every time there’s an Andrew Lloyd Webber retrospective and once again we have to listen to “The Music of the Night.” Andrew Lloyd Webber is SO much more interesting than that!

Getting back to Once, I’m finding I prefer the original versions to the Broadway show versions (though I completely recommend the show), with the possible exception of “Leave,” which Steve Kazee kills. Wow.

Massachusetts residents: TOMORROW (Wednesday, October 17) is the deadline to register to vote for the November 6 state election in which ELIZABETH WARREN IS RUNNING FOR SENATE. (Of course that is also the day of the presidential election which is of course also extremely important in Massachusetts, DESPITE THE STUPID ELECTORAL COLLEGE.)

My schedule for the Texas Book Festival includes:

8 – 8:45 PM: Dear Teen Me: Panel with Paolo Bacigalupi, Jenny Han, Maureen Johnson, Marie Lu, Maggie Stiefvater, and Siobhan Vivian. We’ll be reading from short letters to our teen selves. I haven’t written mine yet. Oh man. I just wish I could give teen me a hug. This event is part of Lit Crawl Austin, at Pine Street Station.

I’ll post more details as I receive them, but if you have questions, I recommend you check out the Texas Book Festival website.