[Warning: There is a Buffy Season 7 spoiler at #23. YOU HAVE BEEN WARNED!]

So. There are so many things to dislike about Valentine’s Day — which is why last year, I renamed February 14 “Interplanetary Be Who You Are Day.” The link will take you to a quick explanation, though I think you’ll get the idea if you read on. It’s mainly about how Valentine’s Day likes to exclude people who don’t deserve to be excluded.

Who are you, and what is your place in the world right now? I’m going to bet that whatever your answer, there’s no shame in it, and Interplanetary Be Who You Are Day is the day to celebrate that fact. Last year, I made a list of identities in which there is NO SHAME, on February 14 or ever. Here are a few additions to the list:

1. A person who’s never been in love, wants to be, but doesn’t know if she ever will be.
2. A person who’s fallen for the Wrong Person.
3. A widowed person who’s falling in love again, and a widowed person who isn’t.
4. Divorced parents who are having a difficult time figuring out the best way to care for their children as a separated team but who are trying their absolute hardest to do it right.
5. A marine biologist who prefers the company of sharks to the company of people.
6. A cardiothoracic surgeon who would rather be home with her spouse having a candlelit dinner than repairing this artery.
7. A woman who’s only just realizing now that her husband of 12 years is an asshole.
8. A young person who’s afraid that he or she is ugly.
9. A person who’s about to tell someone that she is bi — someone who might not like it.
10. A person whose soul is telling him that he is happiest and most fulfilled when single.
11. A girl who loves boys and was once a boy who loved girls.
12. A couple who are sad and confused and not sure they’re going to find a way to make it work.
13. A couple that has made it work.
14. A couple that hasn’t.
15. A person who’s more into trios than couples.
16. A person who adores Valentine’s Day and wears pink socks with hearts.
17. A person who’s grieving.
18. A person whose heart is broken.
19. Some folk who’re having a fabulous time planning their Pez-themed wedding.
20. Parents who hate the commercialism of Valentine’s Day but are cheerily helping their kids make valentines.
21. A person who wants to make a big splash for Valentine’s Day but doesn’t have the money.
22. An alien named Zorkybot who’s the perfect match for an earthling named Angela, except that he’ll never meet her, due to NASA’s budget problems.
23. A vampire with a brand new soul, an unrequited love, a world of guilt, and a terrible headache.
24. A novelist who’s been watching way too much Buffy the Vampire Slayer.
25. You.
26. Me.

Whom did I miss?

In honor of Interplanetary Be Who You Are Day, me finishing Buffy, and LOVE, here is a poll. (If you can’t see the poll, please go to my Blog Actual, here.)

Please spread the news about Interplanetary Be Who You Are Day! And don’t forget the impact of Valentine’s Day on people all over the world. Here’s a link to info about conflict-free diamonds. Here’s one to help you find fair trade flowers. And here’s one for fair trade chocolate.

Have a Great Interplanetary Be Who You Are Day, everyone! And don’t forget to vote in the poll! 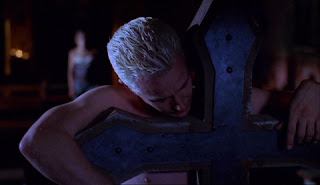