Since this is a post about beauty, I wanted to use my most beautiful book cover as an icon. Not an easy choice, but I found myself returning to an old classic.

So, I’ve got two things to show you today. The first is from NASA’s Astronomy Picture of the Day; it’s the photo from April 26, which I’ve had bookmarked for a month and half now, waiting until I had time to blog it. 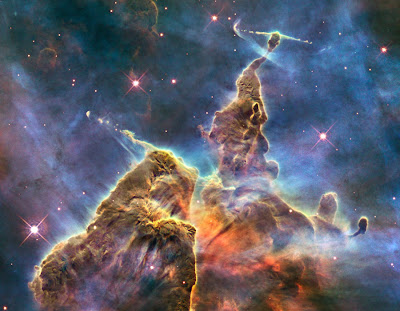 This is a dust pillar of the Carina Nebula. Here’s an excerpt from the NASA page: ” Inside the head of this interstellar monster is a star that is slowly destroying it. The monster, on the right, is actually an inanimate pillar of gas and dust that measures over a light year in length…. The pink dots around the image are newly formed stars that have already been freed from their birth monster.”

Go to the page actual to read the rest; click the photo to see it bigger; or just look at it for a minute and, if you’ve read Fire, check out that monster on the right, an arrow in her hand. Some monsters are beautiful :).

Thanks to NASA for offering their images to the public domain. And for building the Hubble Space Telescope. Don’t you just wish dreamers like Copernicus and poor house-arrested Galileo could see this stuff?

Here’s the other thing I wanted to show you: 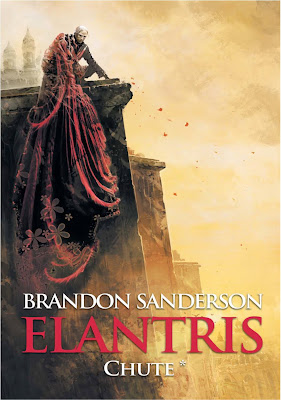 Click to see it bigger. This is the cover of the French translation of American author Brandon Sanderson‘s novel Elantris, published by Orbit France. At the signing table in Épinal, directly at my right shoulder was… well, Joe Abercrombie (the quarters were tight)… but wedged between Joe and me was a pile of Brandon Sanderson’s Elantris, and I couldn’t stop looking at it, because I WANT TO LEAN OVER A PRECIPICE WHILE WEARING THAT CLOAK. I was so gaga over it that my lovely French editor finally just gave me a copy of the book, which of course I can’t read. But I can LOOK AT IT.

I hope there are beautiful things in your day today.