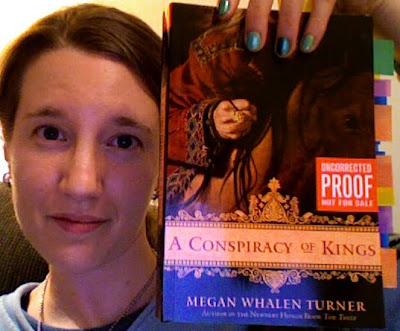 I was thinking the other day that it’d be nice to live on the planet where the kingdoms of Attolia, Sounis, and Eddis are. After all, that planet has Gen, Irene, Helen, Sophos, Costis, the magus, and some chill-inducing gods, which makes it a damn awesome planet.

At the end of my deliberations, though, I decided I like our own planet best, and here’s why: we have Megan Whalen Turner.

You are not going to be disappointed by this book.

(For the uninitiated: read The Thief first. And for those in need of gifts for a book lover: A Conspiracy of Kings doesn’t come out until April 2010, but The Thief, The Queen of Attolia, and The King of Attolia are all out in paperback.)

(Also — I don’t know if any of my readers will have read A Conspiracy of Kings already, but just in case any have, here’s a warning for others to tread carefully through the comments to this post, because there may be Attolia spoilers. Commenters, please be kind and use spoiler warnings!)