Sometime in July, I got a massage. Before we started, as usual, I gave the masseuse a rundown of all the little aches and pains, pulled muscles and bruises I had so she would know what she was working with. It was a longer list than usual, and then, after we’d started, she kept pointing out problems I hadn’t even realized I had. Finally, when she pointed out that my knee was puffy, I said, “I’m a wreck!” And she said, “Nah, you’re just using what you’ve got.”

This is not the most earth-shattering post ever, I know. I just wanted to explain my semi-absence and apologize for the lack of substantive stuff in my brain and on the blog. Work has been hard, family and friends have been plentiful, and life has been awesome. I am a lucky ducky.

The trick below is called a set whip, and I’m proud of myself for pointing my toesies. 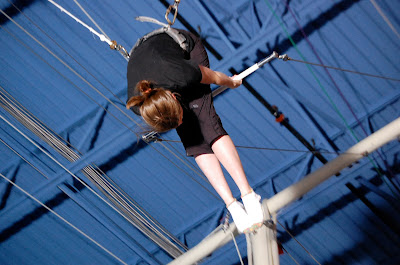