Okay, I should never have said that thing about how the next thing I blog is going to be the girl superhero post. All it’s doing is preventing me from blogging anything at all. When in fact, I have some mighty complaints, like, for example, why in the name of all that is reasonable is the fabulous Jeremy Jordan not going to be starring in Finding Neverland now that it’s moving to Broadway? Jeremy Jordan was SO SO SO SO wonderful as J.M. Barrie in that show. He has so much talent and charisma, his voice is beautiful, he is beautiful. AARGHHH! Thank goodness I had the chance to see him originating the role at the A.R.T. this summer/fall. 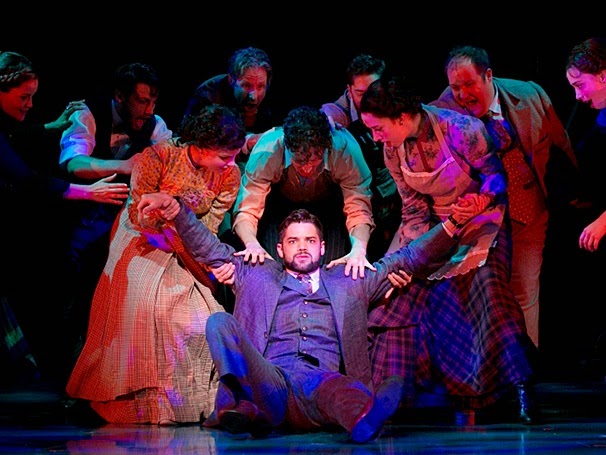 Also, big cats like boxes, too; baby elephants have, like, no control over their legs whatsoever; and there are some really great moments in this video of (domestic) cats freaking out. Oh my goodness, the kitten and the lizard.

Also, a conversation with a writer friend recently about the distinction between young adult and middle grade books led me to a conversation with children’s lit colleagues about how difficult these categorizations can be sometimes, and how problematic. One of my colleagues linked me to an interesting mention of the lawsuit currently arising around the question of Maurice Sendak’s will, all related to the category problem. “The suit argues that the [Sendak] estate doesn’t intend to transfer to the [Beatrix] Potter books because ‘they are children’s books, not rare books,’ the Inquirer writes. ‘The Rosenbach [Museum and Library, to which Sendak left his rare book collection] calls that reasoning not only faulty but rife with irony: Sendak argued that divisions between adult and children’s literature were invalid — in his work as well as that of others.'”

If it’s any comfort to those of you who are wondering when on earth I’m ever going to publish another book, the reason I’m not getting to the girl superheroes post is because it’s a big project, and the only big project I have the mental space for right now is this revision that I’m working really, really hard on. I hope that before too long, I will have some news about my next book. Thank you so, so much for being patient, everyone. Godspeed to all writers, especially during NaNoWriMo! And by the way, if the idea behind NaNoWriMo (write 50,000 words during the month of November) paralyzes and depresses you, remember that it’s not actually about word count; the fastest I’ve ever written 50,000 words is probably eight months and I do this full time. Just be writing. That’s all that matters if you are a writer: that you are writing.