It’s been snowing for about 25 hours. I keep thinking about Almanzo Wilder and Cap Garland and hoping they’re okay.* Here is the view from codename: Apocalyptica’s garage in Swampscott.  That’s her buddy Margaret’s car, in case you didn’t recognize it as such. 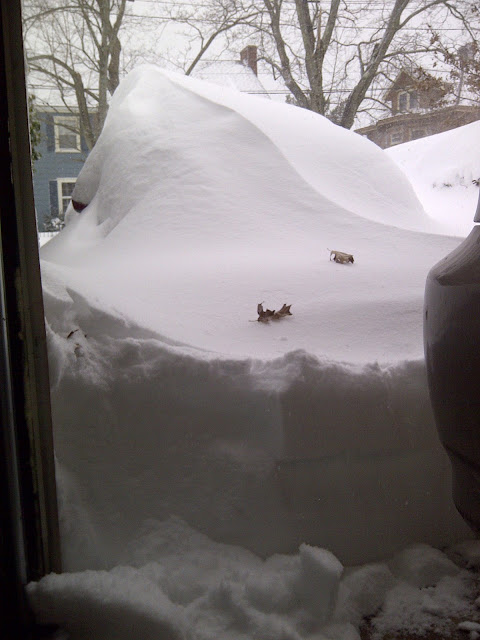 There are many magical things about a storm like this (provided you keep the TV off and ignore all the stupid hype. It’s a snowstorm. We live in New England). One of my favorite magical things is the silence.  Aside from the occasional snowplow, there’s no traffic, which is unheard of around here. And the snow insulates and muffles sounds.

_____
* This is a reference to The Long Winter, by Laura Ingalls Wilder. During the fall, winter, and spring of 1880-1881, South Dakota had a particularly harsh season of blizzards (beyond anything Boston has ever known). The blizzards came hard upon each other, each one fierce and crippling. The trains couldn’t run, supplies were running low, there was no new food or fuel. The people in Laura’s town slowly began to starve (and freeze!). So Almanzo and Cap set out between blizzards — so dangerous! — in search of a rumored settler at a claim some 20 miles away who was said to have wheat the boys might be able to buy to save their starving town.  I won’t tell you what happens, because this is Wilder’s strongest book in the series, and you should go read it if you want a gripping winter tale.