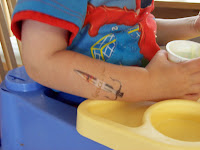 The best thing about Graceling tattoos is that if you happen to be two years old, they take up half your forearm.
Behold my Gollancz cover, for the UK edition! 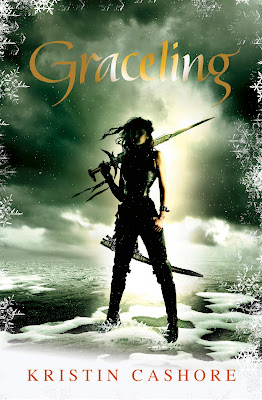 I think it’s gorgeous and striking and I love the atmosphere. It isn’t faithful to the character’s actual wardrobe (no, I don’t generally clothe my characters in skintight leather!), but it still captures the right feeling, in my opinion. Also, OMG, what an excellent sword.
It does remind me that I wish the default woman in magazines or on TV or on book covers wasn’t always so skinny. To be fair, I never specifically state that Katsa isn’t skinny. I believe I’m mostly vague throughout, and I hope that I’ve allowed for interpretation. But anyway. This all brings up a thing I’ve been thinking about lately, and a thing I struggle with and get frustrated about as I work on my writing. I don’t like the idea of contributing to our society’s fat-phobia. At the very least, I want to avoid fat-negativity in my writing — no evil villains whose awfulness is embodied by fatness; no strong women whose strength is embodied by thinness; no fat, weak heroines whose journey to strength and enlightenment is accompanied and symbolized by weight loss; no implication that fat people don’t even exist (i.e. only putting thin people in my books). And at the most, I want to write fat-positively, I want to express that fat is beautiful and competent and strong. The question becomes, how can I work this into my writing while being true to the characters and stories that live in my head, and without seeming like I’m using a shoehorn?
I try to be vague about things like body size with my heroines, unless her body size is actually relevant to her character or to the story or to the moment. It’s partly because their body sizes tend to be vague in my own head and partly because I like, when I’m reading a book, to be able to picture the character how I want, and like my readers to be able to do the same.
At the same time, I try to make sure to depict secondary characters who are also either vaguely depicted or else represent a range of body sizes/appearances that do not reinforce our society’s stereotypes. (Sometimes I might make a strong character short or a pleasant character ugly or a strong character fat or an unhealthy person thin, but I don’t mean I dwell on it, I just try to add little details in passing. [Honestly, I’m not sure what I did in Graceling. I was less conscious of all of this when writing Graceling; at that point, I was just struggling to write a coherent book. I’ve found myself more conscious of this stuff with Fire and Bitterblue. Ugh, and I’m sure there are places where it doesn’t work or I contradict myself and so on. Let me say, to anyone who does not write books, that this sort of thing can get unbelievably tricky.])
I got sidetracked there. The point I was trying to get to is this: I’m worried that what I’m creating is a catch-22. If I’m being vague about the body size of my heroines, but am then careful to be specific with the occasional secondary character, doesn’t that mean that I’m implicitly relegating my heroines to whatever is considered body-normative? By which I mean, if Secondary Person X is described as noticeably round, but Heroine A’s diameter is not specified, then doesn’t that imply that Heroine A is NOT noticeably round? AARRGGHHH! AT THIS RATE I WILL NEVER SAVE THE WORLD!!!
Obviously the solution is for me to write a protagonist who is definitely and deliberately fat. Unfortunately, no definitely fat protagonist has appeared in my head so far. I’ve only got vague-bodied protagonists in my head (and also one very small person). And I’m sorry, but here I put my foot down as a person who has written four and a half books and therefore is in a position to have an opinion: you cannot force these things. She has to come to me, and it has to feel right. Perhaps she will. And then I will do my absolute darndest to write an awesome fat heroine. (Which then brings up the whole other issue of whether a skinny person is qualified to write a fat person, which of course she is, or no one could ever write anyone except themselves, and besides, I can’t imagine my fat heroine’s fatness being the point of the book. It would just be the way she was. Sigh. NEVER MIND.)
As you can see, this is something I get myself all confused about. And at a certain point I need to let go of any and all social agendas, because there are so many things that go into writing a book, and I can only take them one at a time. But. I’m trying. At the very least, I will avoid any conscious fat-negativity in my books, and I will aim for fat-positivity. AND I will encourage seeds of diversity in the landscape of my brain. Because that’s where the magic grows.
If this stuff interests you, check out the recent post “Where are all the Fat Heroines?“at the Rotund, which is what got me on this train in the first place.
Whew. Thanks for bearing with me on all that, and I would love any reactions, including, “You are the biggest moron ever to walk on two legs.” (Because I do. Walk on two legs.)
Great news: I have a Spanish-language publisher, Roca.
Fabulous news: Publisher’s Weekly gave Graceling a star and said some embarrassingly nice things here. (It’s the very last review on the page, and it contains spoilers. The final two or three sentences are spoiler-free.) (Edit: PW‘s website has been having some trouble — sorry if you can’t open the link!)
Finally, anyone who knows me knows I have a weakness for cute guys. So I’ll close my post with the cutest guy ever. His name is Callum. :o) 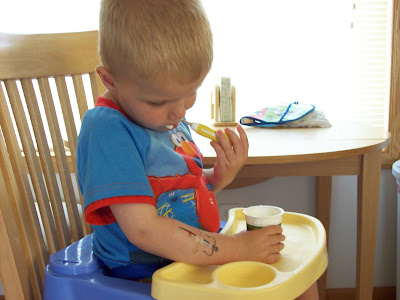