… I guess I’ll know when I get there.”
(That’s how it feels sometimes when you’re learning to fly, you know?) (Link plays song.)

So, I haven’t been blogging about trapeze class, but it’s not because I haven’t been taking class. It’s because I start to worry that it’s obnoxious and narcissistic to plaster pictures of myself all over my blog. Especially since these pictures are so flattering and show up how much more graceful I am than the rest of you people. 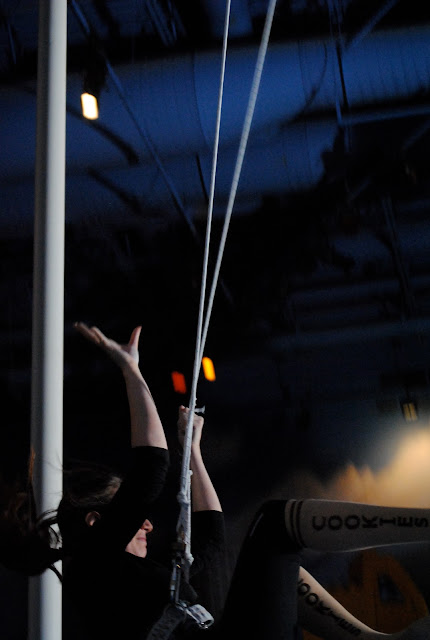 (Or maybe I just don’t want any of you to realize how much time I spend sitting in the net, laughing hysterically at how badly that trick just went. Sigh…) 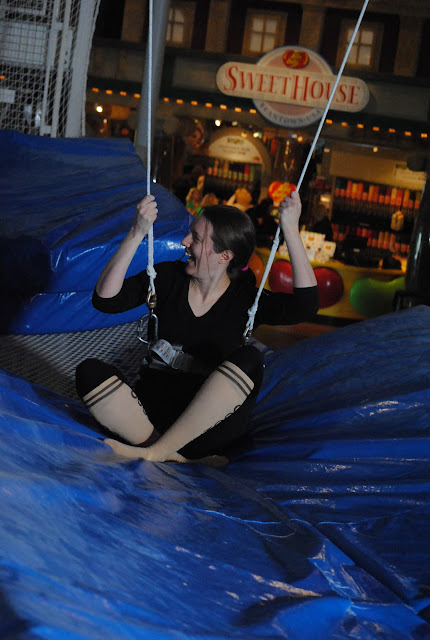 Yeah, so. There’s been a LOT going on at trapeze class, and there’s something I want to say about it. Bear with me while I try to figure out exactly what it is.
I’ve been learning some new things. I’ve been working on my swing, which is where you get a lot of the power for your tricks, and which is the hardest thing they teach at trapeze school. It involves learning to kick while swinging, when, where, and in which direction. It feels both completely weird and completely right at the same time. I can’t explain this.  Trapeze is often about things feeling simultaneously ridiculous and exhilarating. 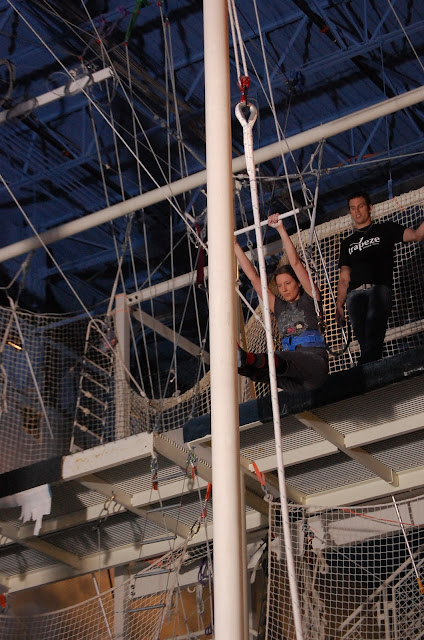 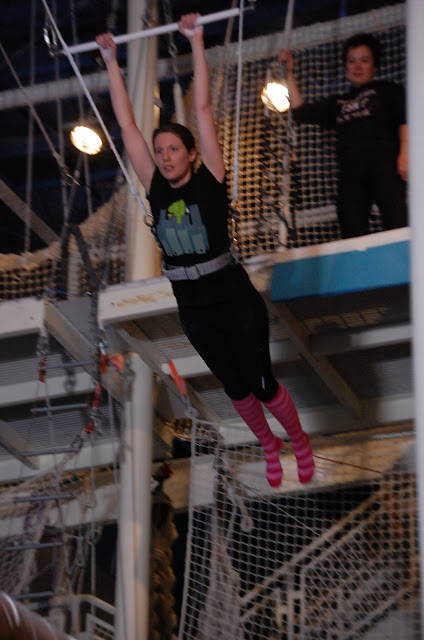 After a practice swing like the ones shown above, you swing your legs up a little, let go, and land on your back in the net. Or, rather, that’s what happens if you do it correctly. I have not managed to do it correctly once. I know this is partly because it’s a new skill for me and my body is confused about how to position itself during a freefall. But it’s also because my mind refuses to believe that I will be safe if I can’t see where I’m falling. Someday, I will convince it. For me, trapeze is a lot about learning to let go of (the delusion of) control.
I’m also learning how to take off better. Trapeze is all about physics, but I’m not so great at translating concepts I understand intellectually into motions my body does gracefully. I’m working on it. For me, as a writer who’s work is all in my head, trapeze is about learning to connect with my body. In the picture below, Steve is trying to show me how to position the bar during the moment of taking off. 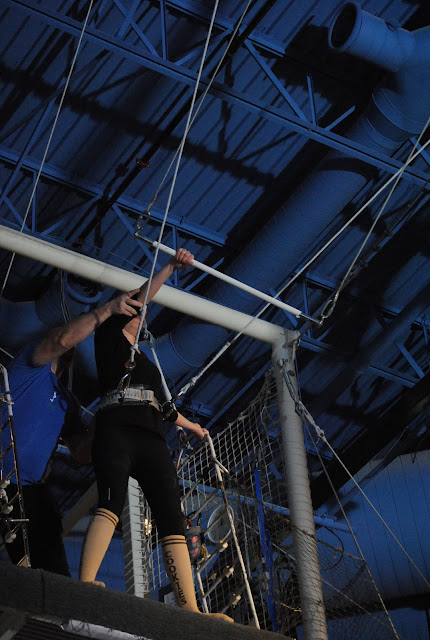 I am, of course, still working on my pullover shoot. (If you’re new to my blog and curious, you can learn about my struggles with this trick here, here, and here.) Sometimes, it works. 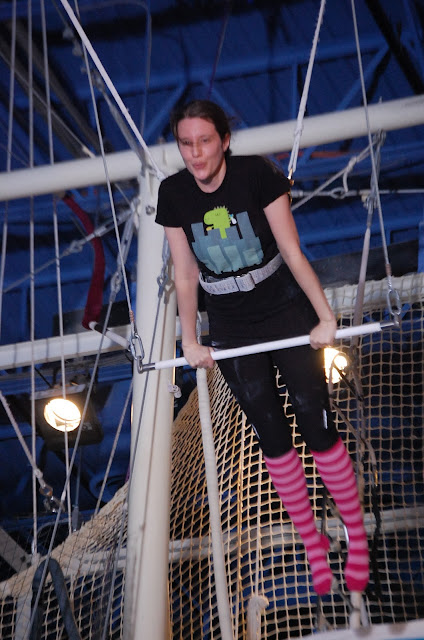 Often, it doesn’t and I tip off. WHOOPS! 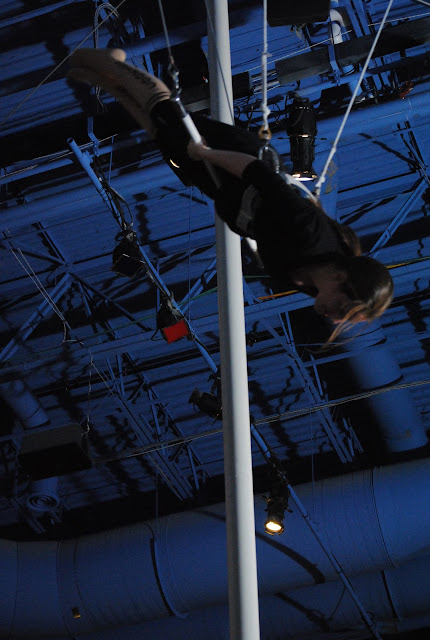 At my last class, I learned a whole new way to screw up this trick, but the good thing about this screwup is that it has fun consequences. Hmm, how can I explain this? Okay, look at the picture above. You see that I am about to fall forward over the trapeze? Imagine if, instead, I tipped the other way, and fell backward behind the trapeze. The result would be what you see in the picture below: 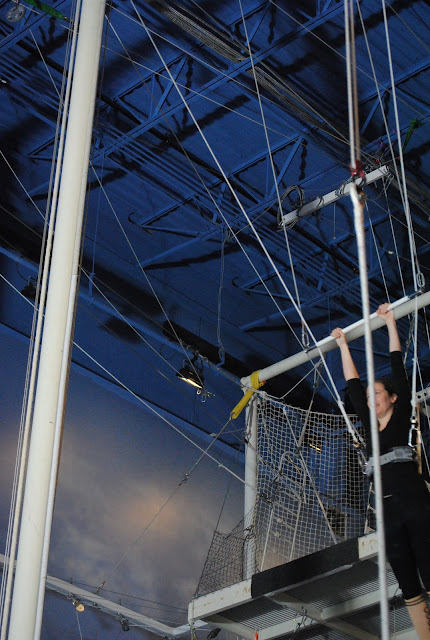 See how I’m hanging there like a goober? That’s completely normal. But what isn’t normal is that because of the way I fell, I pulled the lines attached to my belt through the trapeze. Can you follow the ropes from my belt to the trapeze bar and see what  I mean? Now, when this happens, when I let go to come down, my safety lines will be all tangled up in the trapeze. This will be an annoying thing for my instructors to have to untangle, in addition to being an unsmooth way for the lines to operate while I’m still attached to them. SO. In order to come down safely and untangle the lines, I need to climb up onto the trapeze and jump through it. 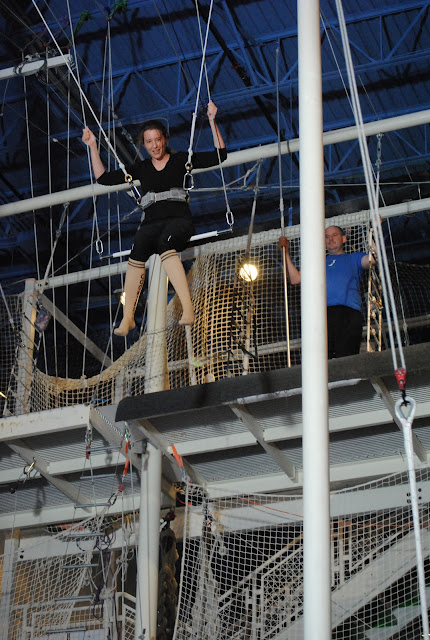 First, though, I have a shouted exchange with Ally on the floor, because I actually have no idea what’s going on. I can’t see the problem with the lines — all I know is that Ally told me to climb up on top of the trapeze, so I did. But! This was never part of the trick before! WTF is going on!

For me, trapeze is about letting someone else be in charge for once, and doing what I’m told. *ahem* THIS IS NOT A SKILL I TEND TO HAVE IN LIFE. I’m working on it. 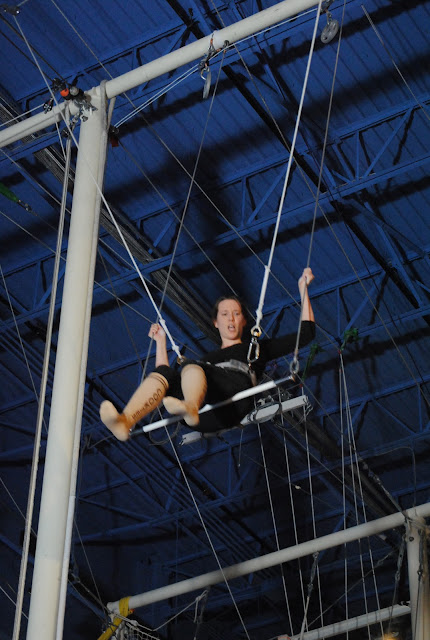 Actually, it’s fun up here. And my socks say “COOKIES!” Can’t I stay? 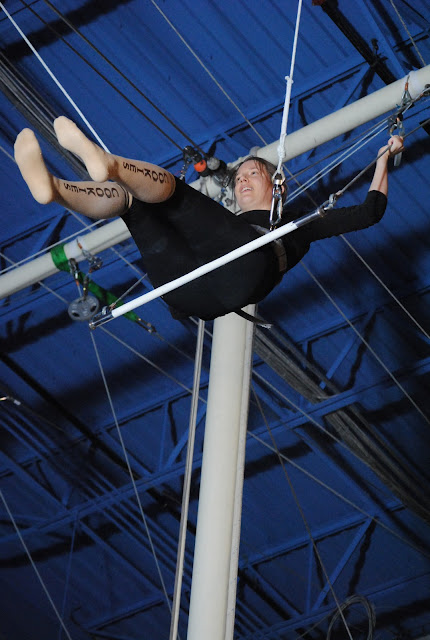 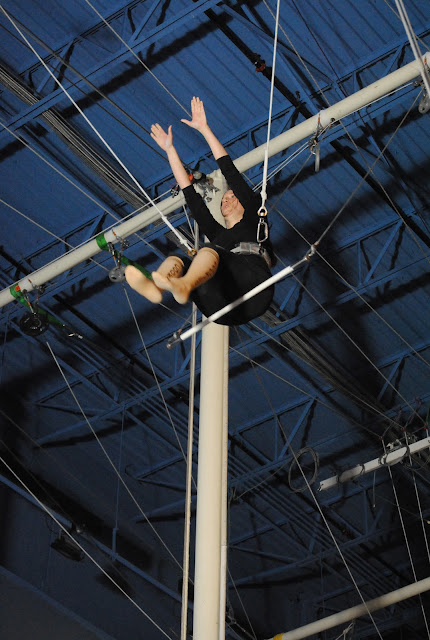 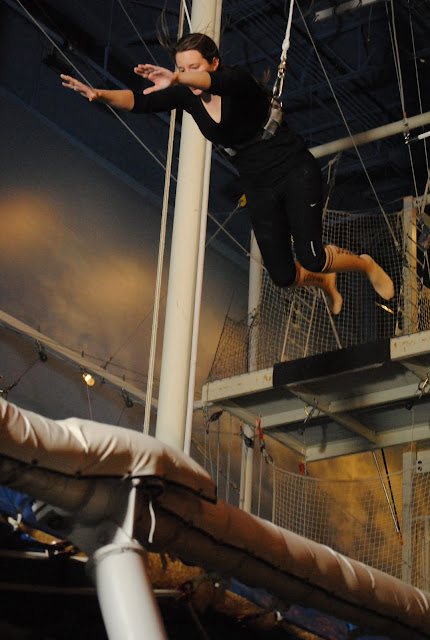 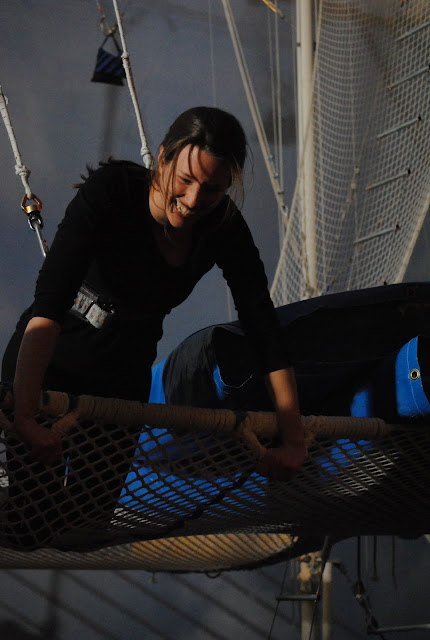 So, I’m having fun writing this blog post… but I’m also trying to figure something out. With trapeze, I’m always trying to figure something out. I’m trying to figure out why I keep going, even though it scares me. Why I keep working at a trick, trying my hardest, even though I fail at it over and over again (and in so many ways!). Why I am willing to embarrass myself repeatedly. Why I come to class thinking, Why did I think this was a good idea?, and leave class thinking, When can I do it again!? Is there anything you do in your life that you know you’re never going to be really good at — but you do it anyway, and couldn’t not?
You know what? I think I’m lucky to have a safe and encouraging place where I get to practice what it’s like to be outside my own comfort zone. Where it’s okay to take risks and fail, over and over; where it’s okay not to be great at something. This is actually not a small thing. As a writer, I’m always taking risks. But as a writer with readers in lots of countries and a WIP that’s taking a long time, the pressure to deliver, and to deliver a winner, is enormous. Failure does not feel like an option. This is not a complaint — I’m damn lucky and I know it — but it is a thing that can mess with your head if you’re not mindful. At trapeze class, I fail over and over, then discover that the world doesn’t end and I’m allowed to keep trying. What a relief this is!

I wonder if one of the things I’m practicing on the trapeze is learning that if I failed at writing, that would be okay, too? That actually, it’s okay to fail at anything? That the point is to try?

(“Failure” and “success” are weird words anyway. I’ve never been too sure what they mean. They certainly aren’t as straightforward or as opposite as a lot of people think.)

It surely doesn’t hurt that while I’m figuring all these things out, I get to fly. 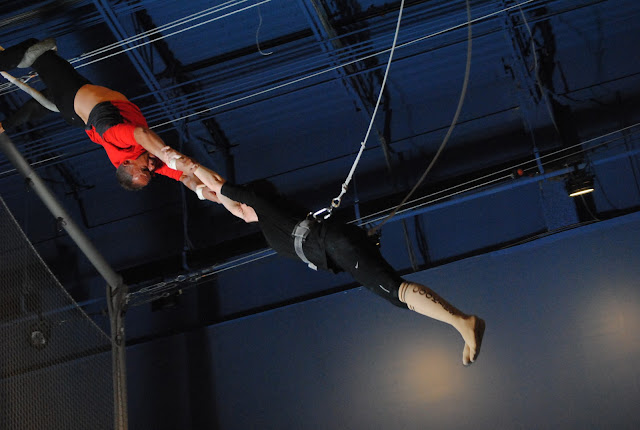 The stripey socks pics today were taken by Molly. The cookies socks pics were taken by Christine.  Thank you so much for all the pics, Molly and Christine! The classes depicted here were taught by Erin, Wendy, Kaz, John, Jon, Jake, Ally, Steve, and the president and co-founder of TSNY, Jonathan Conant (shown catching me above). Guys, I still can’t believe you let me come and flop around on your equipment. I promise, one of these days I will remember to keep my feet together and point my toes.
:o)