… via screencaps of all the browsers currently open on my phone. Some of these are priceless, others are slightly pointless… 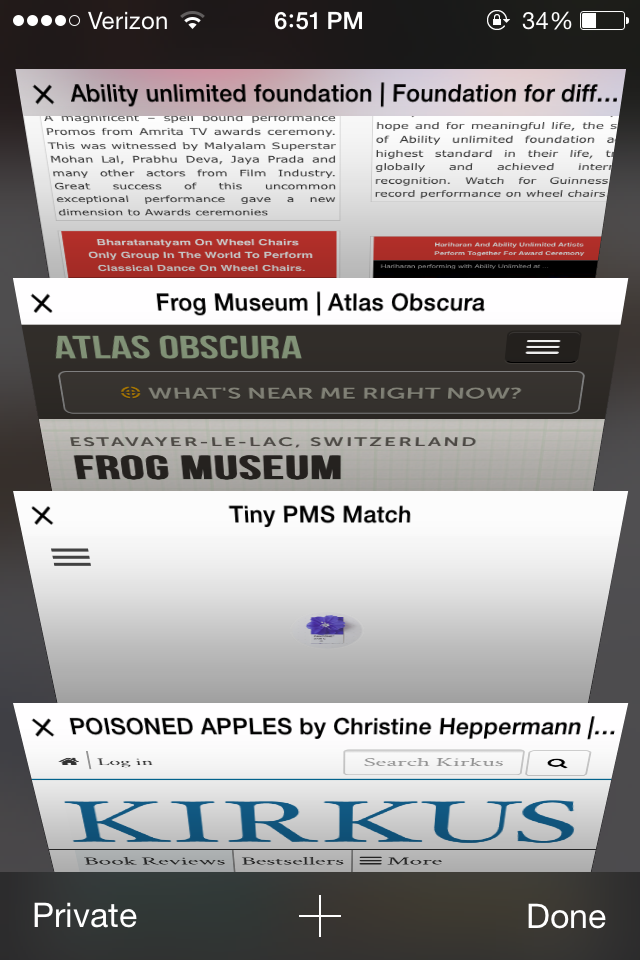 3. Tiny Pantone Matching System Match. “A personal project of tiny proportion—matching small everyday objects to their Pantone® colors, by designer Inka Mathew.” Oddly soothing! I couldn’t stop scrolling down until I got to the end. Thanks, Jess 🙂

4. Poisoned Apples: Poems for You, My Pretty by Christine Heppermann. This outstanding new book of poetry turned me into a puddle from the first poem. A silent, wondering puddle. Not out until September but it can be pre-ordered. From the starred Kirkus review: “Lacing traditional fairy tales through real-life perils, Heppermann produces short poems with raw pain, scathing commentary and fierce liberation. There’s no linear arc; instead, girls buck and fight and hurt…. Full of razors that cut—and razors to cut off shackles: a must.” 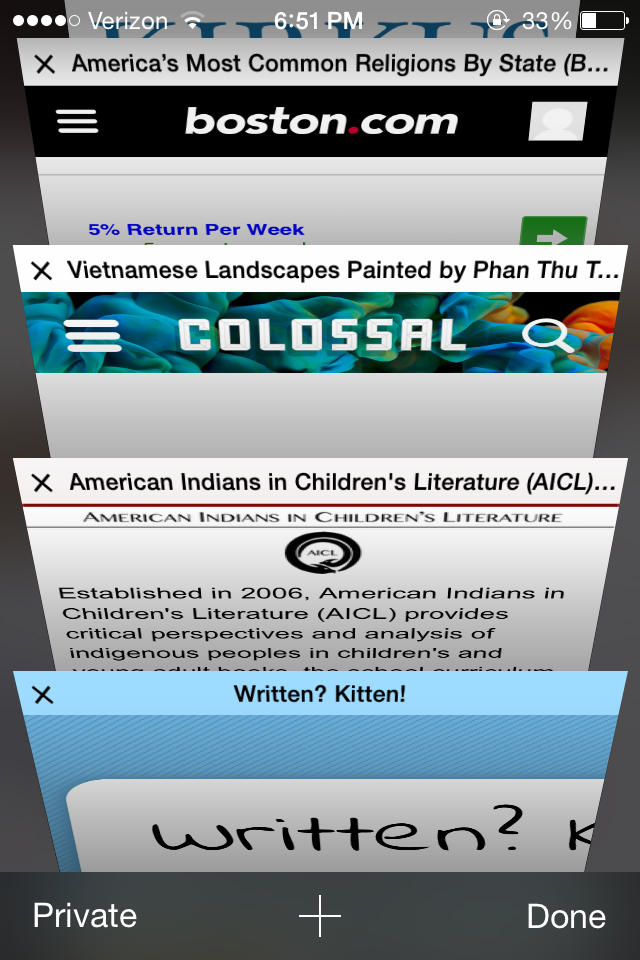 5. Graph showing the most common non-Christian religions in the USA by state. Cool! Thanks, Becca 🙂

7. Super Indian, a comic by Arigon Starr, reviewed at American Indians in Children’s Literature. This and the four links in the next screencap are comics I intend to look into at some point. I can’t remember how I came across this one, though… 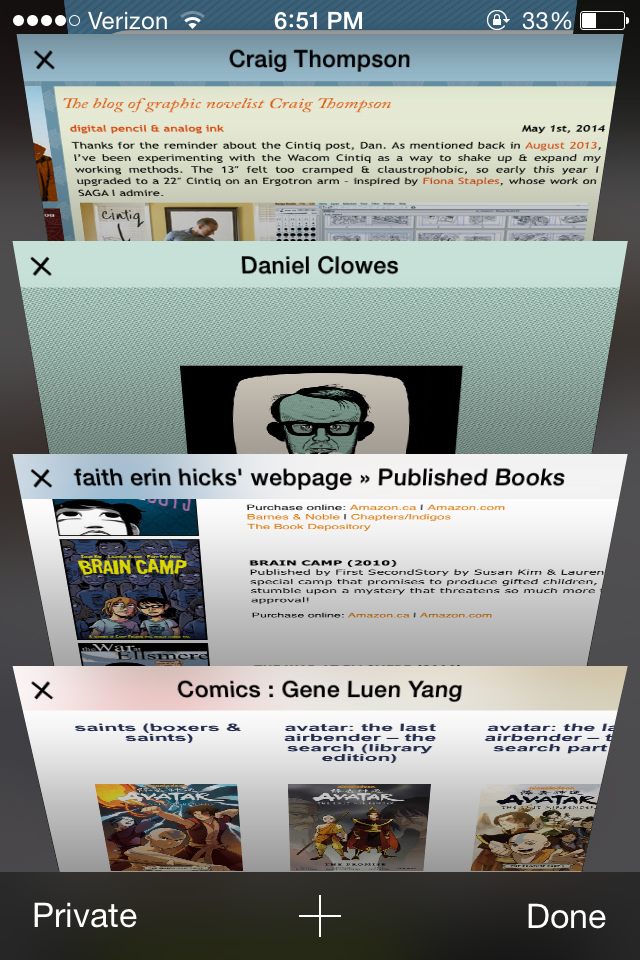 10. The comics of Daniel Clowes.

11. The comics of Faith Erin Hicks.

12. The comics of Gene Luen Yang. Thanks, Amanda, for all four 🙂 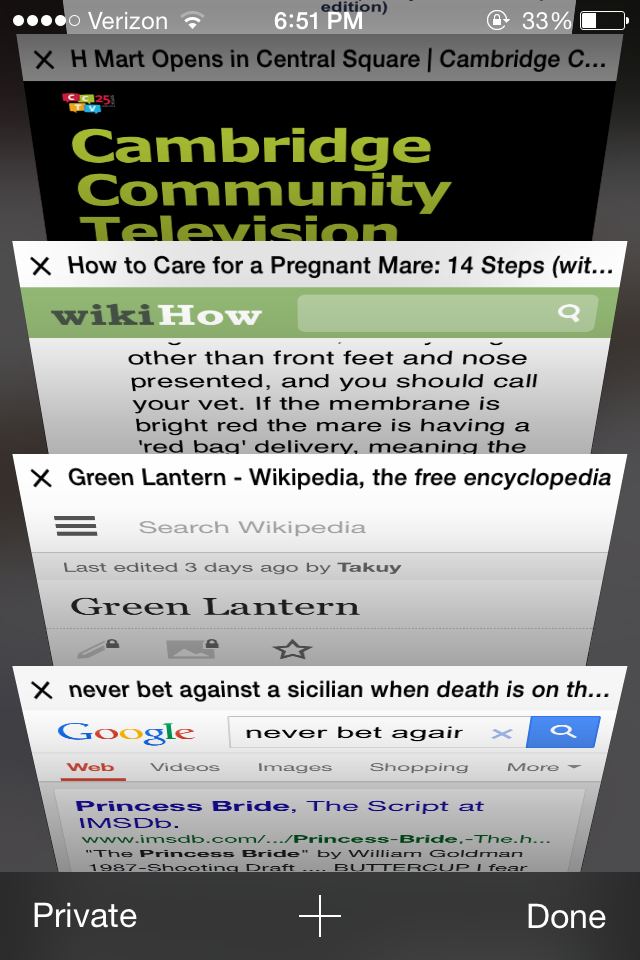 13. Around here is where my links start to get exceedingly random, and maybe I should’ve closed a few browsers before taking my screencaps… But, local people, do you know about the new H Mart in Central Square? Thanks, Becca 🙂

14. How to Care for a Pregnant Mare. This is book research. You know, you would really not believe how late in a pregnancy mares remain active – and how dangerous a delivery can become, very quickly, for both the mare and the foal, if the foal isn’t presenting correctly.

15. The Wikipedia page for Green Lantern… because you know what, I don’t really understand the point of Green Lantern. I will say, to his credit, that at least he doesn’t have a big letter A on his forehead that stands for America.

16. A Google search for that line in The Princess Bride about how you should never bet against a Sicilian when death is on the line. I (being of Sicilian heritage) needed to use the line in an argument with a friend and wanted to make sure I was quoting it correctly. (Like I said, the links begin to deteriorate a bit here at the end… but I am a completist, so (uncertain about whether I just used that word correctly) I soldier on!) 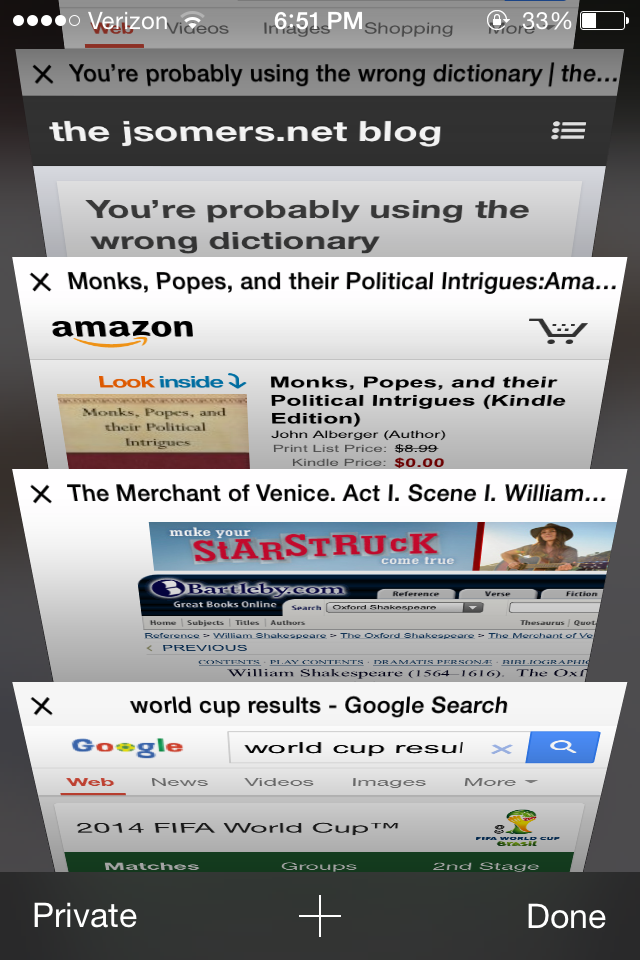 17. A lovely essay called “You’re Probably Using the Wrong Dictionary,” by James Somers. (Webster’s 1913 Dictionary is the one we should all be using.) Thanks, JD 🙂

18. Monks, Popes, and their Political Intrigues, by John Alberger – a free e-book on Amazon that will remain on this open browser until I get around to downloading it. Book research. No idea if it will be helpful; often I read things on instinct, not entirely sure what I’m looking for.

19. The first few lines of The Merchant of Venice, about sadness, spoken by Antonio. These words are so, so beautiful, and sometimes, if I’m sad and I can’t figure out why, it’s a great comfort to me to read them out loud:

In sooth, I know not why I am so sad:
It wearies me; you say it wearies you;
But how I caught it, found it, or came by it,
What stuff ’tis made of, whereof it is born,
I am to learn;
And such a want-wit sadness makes of me,
That I have much ado to know myself.