Where do you get the inspirations for your novels?

There’s are two fundamental problems with this question: (1) It contains incorrect assumptions about where a book comes from. The tiniest proportion of a book — let’s say 3% — comes from inspiration. (2) It’s also unanswerable. Where does that sliver of inspiration come from? I have no idea. Where do your ideas come from? Mine come from the same – unnameable – place as yours.

A few tiny, incomplete ideas come to me. A woman who secretly killed her own father. A green house and a big tree. Enemies who are trying to steal something from the realm, but the realm can’t figure out what they’re after. Okay, fine. Now it’s time to sit down with a pen and paper and start working toward something I can use in a book. I start trying things; I start asking myself questions.

This morning I went digging through my files and was able to find some of the pages of my planning work before I ever started writing Fire. (Click them to make them bigger. Sorry about my handwriting!) What I wrote then may or may not make sense now in regards to the final book; a lot of my ideas were in flux at the time. 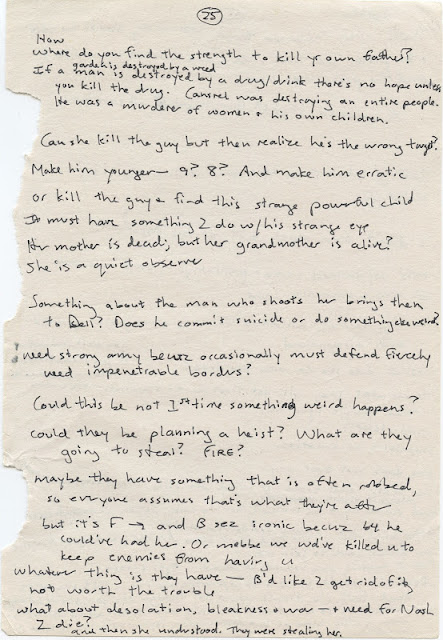 Notice the page number. This is page 25 of a string of questions I asked myself while planning this book. I was able to find 31 pages of this for Fire this morning.

Here’s page 27, which contains a rough attempt at a map of the Dells (very different from the final), and also a lot of conversation about the tree in the back garden of the castle in King’s City. 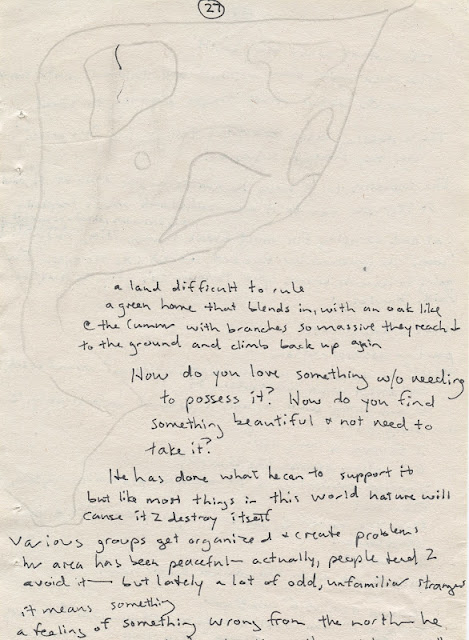 I think it was Neil Gaiman who said everyone has ideas, the difference with writers is that writers notice that they’re having an idea. On page 27 above, here’s a concrete example of that — evidence of the moment I got the idea for the massive tree, and where that idea came from. It says, “with an oak like @ the Cummer with branches so massive they reach down to the ground and climb back up again.” The Cummer Museum and Gardens, in Jacksonville, FL, where I was living when I wrote Fire, had (and presumably still has) the most gorgeous oak tree in its back garden. The museum was free on Tuesday afternoons. I would bring my work and sit in the back garden. I noticed the tree. I noticed that I was noticing the tree. I asked myself, Can I use this gorgeous tree in my novel? I wrote it down and worked it out.

It’s the same process with characters. Inspiration: what about a character who’s a good man, but hasn’t harnessed his own strength yet, and makes a lot of not-so-great decisions, which is unfortunate, because he’s the king? Okay… but it isn’t until you’re writing that character, it isn’t until you’ve been writing that character for a long time, that you start to get a handle on who that character actually is. You figure out how they talk (or walk or eat or behave) by writing them talking (walking, eating, behaving), giving it some time, assessing whether the writing is working, deciding it isn’t, then fixing it. You figure it out by doing the work, trying things, writing things, feeling that they’re not working yet, trying again.

Ideas come from paying attention. If you want to write, but you’re feeling “uninspired,” try approaching today as if you are going to mine it for ideas. Bring a little notebook and write down every thought you have, everything you hear, everything you see, smell, and feel, that strikes you as intriguing. Do it the next day, too; get into that habit.  The more you do it, the more second nature it will become. Let yourself do silly things, like daydream! Once you have a few little ideas that seem to be sparking some kind of interest with you, sit yourself down in a chair with a pen and paper (or your computer, if that works for you) and see if there’s somewhere to go with them. Ask yourself questions about them. Start plugging away at some work.