As you can see, I am very good at taking an enforced blogging break. Like last week’s post, however, today’s is mostly full of worthy links to other people’s websites. Plus, orchid nonsense that has no relevance to anything.

1. I’m a little behind the curve on this, but May 1 was BADD, or Blogging Against Disablism Day. What is disablism? It’s discrimination against people based on a disability. That’s an inadequate definition for something complex, really, so here’s a short BADD post full of a whole bunch of powerful definitions for disablism. (Also, here’s the wikipedia definition.) On BADD, people with and without disabilities blog about their experiences, observations, and thoughts about disablism. Here, at Diary of a Goldfish, you’ll find an archive of posts from this year’s BADD. To give you an example, here’s a post on Rebecca Rabinowitz’s fine blog. Also, here’s Sarah Miller’s reaction, which spoke to me as a writer in the world. And, relatedly (though not BADD-specific), here’s a video I like that serves as a reminder that service dogs are working dogs, and for heavens sakes, we should please not pet, speak to, or otherwise distract them:

2. Writer Sandra McDonald is writing a series of posts at Diana Comet Presents on the topic of “75 Years of Fabulous Woman Writers.” The first post, about Alice Mary Norton (you may know her as Andre Norton), was eye-opening. Why are so few female F/SF writers given the props they deserve?

3. If I’m sitting in my rocking chair and I look to the left, here’s what I see: 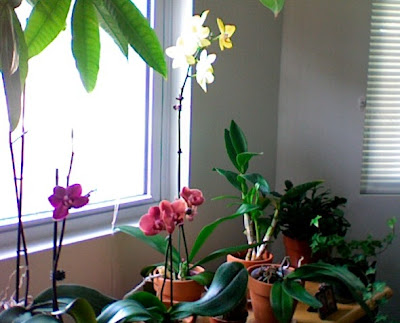 Three of my orchids are flowering! THREE! (If you can’t find the third one, look high.) And the thing at the far left that looks like a dead stick is another orchid that’s growing new buds. The tallish thing just to the left of the corner is a dendrobium orchid that’s growing a new shoot, so I have high hopes for that one, too.

There seems to be this idea out there in the world that orchids are difficult to care for. They’re not. I water my orchids once a week, exactly the amount that makes me feel like I cannot possibly have watered them enough. I don’t use fertilizer. I’ve never repotted them. I monitor their light, giving them full day-long daylight in the winter (that’s not a lot of light, here in Massachusetts), but not opening the blinds until about 11 or 11:30 in the summer. (They sit in an east-facing window, and the light is too strong and direct until about 11 or 11:30 in summer.) When the flowers fall off, I don’t do anything. They seem to like to reflower, or form new shoots, off of the old stem. Mostly, I’m patient, and careful not to overwater them. And, yes, every once in a while one of them dies completely. (I probably should have gone and got some medicine for the one that had mold all over the roots.) But they really aren’t the hassle people think! Especially phalaenopsis orchids. In the photo above, there are 6 orchids. All but the dendrobium are phalaenopses. (I should probably have specified at the beginning of this paragraph that I’ve mostly been talking about phalaenopses. Though I do all the same things with my dendrobium.)

If you’re buying an orchid, check that it has happy green leaves and also some happy green roots, and no fuzzy mold. (It’s okay if it has dried-up roots, too, as long as it also has some plump, pale green roots.) And don’t freak out! Don’t be afraid to experiment. The world won’t end if a couple of orchids don’t make it as you learn how to care for them. It’s normal for them not to flower much, if at all, during the cold and dark times of year. It’s normal for them to take forever to do anything. They’re so worth the wait!

We now return you to your regularly scheduled blog break.