From The New Way Things Work, by David Macaulay with Neil Ardley:

One day, I happened upon a mammoth whose hair had been lovingly combed. The hairdresser, in fact, was just about to return her creation to its owner. No sooner had the perfectly coiffed animal stepped into the street, however, than a combination of litter, loose laundry and stray cats flew into the air and secured themselves to the startled beast’s freshly combed coat. It is common knowledge that a well-groomed individual is more attractive, but never before have I seen this so forcefully illustrated.

This is the prologue to the entry on electricity in The New Way Things Work. Whenever I need a refresher course on how something works (or my first lesson ever, when it’s something I’ve never wondered about before, like, oh, I don’t know, a sewing machine), I go to this book first. SO MANY THINGS are explained in it, and I find that I understand mechanics more quickly when the lesson includes laughter, large, clear pictures, and woolly mammoths.

Writers: I find this book to be a super-helpful resource. Macaulay’s other nonfiction books have helped me out a lot, too, when planning my fantasy worlds — especially Castle and City. 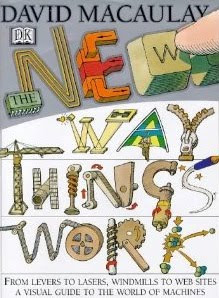 In other news, I love Deborah’s post about demonstrating how useless an author’s opinion of his/her own text is to people trying to interpret the text. An excerpt: “These days, creators of texts are so willing to talk about their intentions that it would be really easy to let students analyze a series of texts, make their own judgments, and then read stated authorial intent. Example: give them a series of texts whose creators have claimed to have major feminist intent but where the text itself is a mixed bag, such as Buffy, or (far worse) Veronica Mars.”

I’m hopping on a train shortly, so that’s it for today. Chicago: AWESOME. What a great city, what great people I’ve met — and the Chicago Public Library is an impressive institution — hopefully I’ll have time to blog more once this week is over. South Bend, here I come. Happy Thursday, everyone!