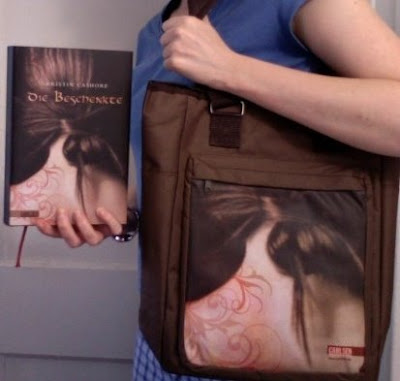 The other day, the FedEx man brought me Die Beschenkte — i.e., the German edition of Graceling. Guys, Carlsen makes gorgeous books. It’s 500 thick, beautiful pages long; the design (interior and exterior) is simply lovely; and IT HAS A BURGUNDY RIBBON BOOKMARK. Even better, it arrived in a Die Beschenkte messenger bag!

Die Beschenkte will be released in the fall.

That’s all the news from here, folks. My days are spent doing things like writing, packing boxes, walking along the river, worrying about nebulous move details, and making (and eating) copious amounts of pizza. Oh, and contemplating crime. (But only because I’m speaking at the Simmons Summer Institute in July, and the institute topic is Crimes and Misdemeanors. ^_^)

Happy Ides of June, everyone.