Hey there everybody. Here’s a little bit of pandemic distraction for your day. If you’re not interested in messy writing or mean cowbirds, skip to the end for a beautiful piece of interdisciplinary art from Juilliard!

First, I have a project (of questionable success) to share. I’m a left-hander who spends a gigantic proportion of my time writing by hand. In the past few years, as I grow older, the toll on my body grows worse. Arm pain! Hand pain! Shoulder pain!

In hopes of giving my left side a break now and then, I’m finally doing something I’ve meant to do for a long time: teaching myself to write right-handed. I did a little research online, I watched a couple videos (because right-handers hold their pens VERY differently from left-handers!), and then I commenced muddling through. 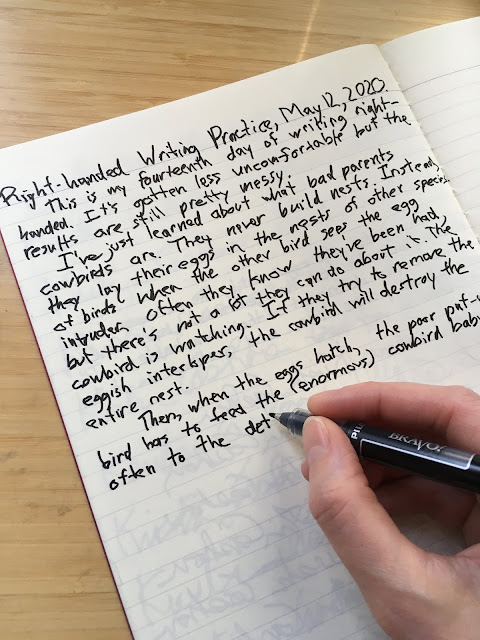 Every day, with my right hand, I print one entire page of writing on the topic of whatever crap is in my head, using both pen and pencil.

Then I do a page of doodles, based on a penmanship worksheet I found online (with maybe some cursive opining at the end). One of the main challenges is making sure I’m using my fine motor muscles — writing by moving my fingers and hand, NOT my entire arm. It’s tempting to use the arm, but the whole point is to develop control in those little muscles. 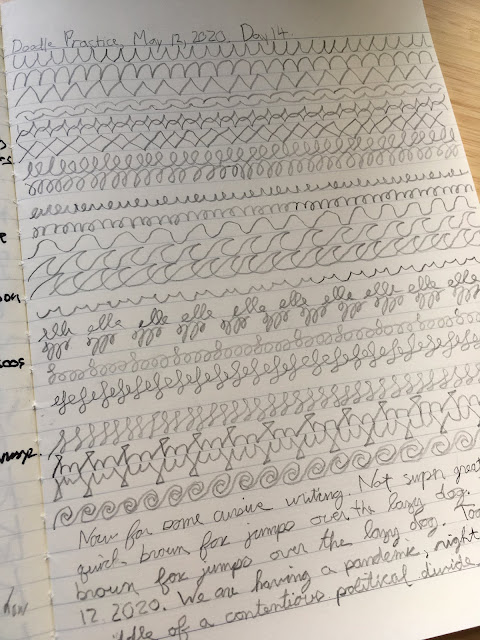 After two weeks of practice, you can judge for yourself how it’s going :o). This feels less like a project I’m doing by choice and more one I’m doing out of necessity, so I’ll be keeping this up. If I ever get past this current stage of slow and sloppy, I’ll let you all know.

I bet by now you’re intrigued about cowbirds, right? Well! In case you couldn’t read my writing above… I recently learned (from one of my sisters, who knows such things) that cowbirds are really shocking parents. In fact, they force other birds to raise their children. They never build nests; instead, they lay their eggs in the nests of other birds. I mean! Look at this picture.

That’s an eastern phoebe nest with one cowbird egg in the mix. According to my sister, the bird parents who return to the nest to find this screamingly obvious egg interloper often know they’ve been duped, but there’s nothing they can do about it, because the cowbird positions itself nearby, watching. If the nesting bird tries to remove the cowbird egg, the cowbird will destroy the entire nest.

Do you have any idea how big cowbirds babies are?

Below is a picture of an adult common yellowthroat (on the right) feeding a juvenile brown-headed cowbird. These little birds have to feed these giant galumphing cowbird babies, often to the deprivation of their own babies! I mean, it’s not the cowbird baby’s fault. But it’s pretty ridiculous.

This practice is called brood parasitism and some other birds do it too. In the picture below, a poor beset reed warbler is feeding a cuckoo chick in (ON) its nest.

There. I hope you’ve enjoyed learning about cowbirds and brood parasitism. Nature is amazing and cruel! But people who take beautiful photos and then make them freely usable online are the best, because the photos are what made this story. Thank you, nice people.

Finally… Some Juilliard students, teachers, and alum came together to create a piece of art for the pandemic. I think they really captured something. I hope it’ll help you as much as it’s been helping me.
https://youtu.be/rqzkn-jX-JU