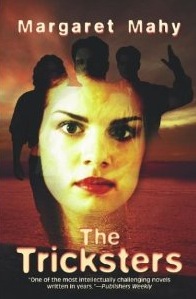 Margaret Mahy could write emotions like sadness, fear, the desperateness of courage, so that you felt them as you read. A few lines from Alchemy (2004):

Certainly the sound of her sadness had spread itself backward and forward through time.

The feeling he had been trying to create – the feeling that the day was just another day – began to shiver out of line.

He could not see an inch beyond his nose. Squinting down in its general direction, he found he could not even see his nose. All the same, still whistling and hissing to himself, reminding himself how real he was, then nodding and muttering agreement with himself, Roland stepped forward yet again, before pausing and groping backward.

She described physical sensations brilliantly. In these lines from 24 Hours (2000), Ellis wakes up with a hangover:

Ellis did not open his eyes. It seemed safer to linger in the darkness behind his lids, for his head felt as if it had split from side to side…. His stomach heaved, and heaved again, as if it were trying to tear itself out of him and set up a separate life in another part of the room…. Bending down, he imagined the top of his head was going to flop open, and that what was left of his brain would fall, squelching, on top of the phone.

The sight of Sorry standing at the school gate that morning had filled her with a soft electricity, exciting but not totally amiable.

He kissed her very briefly and said, “The Sleeping Beauty always loves the prince who wakes her. You’ve had it now, Chant… no hope for you, I’m afraid.” / “I woke myself,” Laura said.

She had a special skill for capturing the eerie feeling that Something Is Not Right Here. From The Haunting (1982):

When, suddenly, on an ordinary Wednesday, it seemed to Barney that the world tilted and ran downhill in all directions, he knew he was about to be haunted again.

She described people so well! Also from The Haunting:

Great-Uncles Alberic and Guy were there of course, tall, towering and toppling a little bit like elegant hollyhocks.

There was trouble at once with the cool receptionist, she was so very white and immaculate that she seemed to leave a bright outline of herself in the air after she had moved on, so that you saw her where she was and where she had been at the same time.

She could make landscapes come alive. From The Catalogue of the Universe (1985):

They could even see, between broom and elderberry bushes, a foxglove forest, rank on rank of tall flowers, all looking east, all looking down, as if at the sound of the crash they had swiveled their long giraffe-necks within their collars of green leaves and were waiting to witness a miracle.

She stubbornly wrote, over and over, about the entropy we all like to pretend isn’t part of life. From Memory (1987):

Jonny was becoming more resigned to the smell, and felt a sort of exhausted pleasure in this mad tea party. This was the hidden machinery of life, not a clean, clinical well-oiled engine, monitored by a thousand meticulous dials, but a crazy, stumbling contraption made up of strange things roughly fitted together – things like a huge water tap, the dogleg stairs, cheese in the soap dish, and a crocheted tea cosy stiff with dirt and topped by a doll’s broken face. Jonny had always been aware of this limping machine, even under the clean, smooth surface of his own home.

“Much better!” Benny agreed, shooting out a spray of cracker crumbs. “Sorry!” he mumbled, breathing them in and then beginning to choke.

“Of course I’ll look after your damned baby,” Christobel was shouting in the living room as Harry went through it to her attic. “Just get out and take that accountant with you, or I might be tempted by him. He’s the best-looking man I know.” Later, Harry came down her ladder and found Christobel watching Tibby with a mixture of amusement and repulsion. Tibby was sitting on her pink pot singing to herself and shifting herself industriously across the floor. / “Gosh, motherhood must be terrible,” Christobel was grumbling. “The things you’ve got to praise people for!”

The Tricksters is about a stupendous young woman named Harry who is trying to form herself and discovers, in the process, the power she possesses to form the world around her. “Then, at last, sitting on her stretcher-bed, she took from the very bottom of her pack an old peacock-blue scarf folded around a heavy, square book. She unwrapped it and opened it very carefully, as if guilty secrets might fall from between its pages like pressed flowers. This was Harry’s secret. She was a writer.”

Margaret Mahy is – Harry is – the reason my blog is named “This Is My Secret.” Thank you, Margaret Mahy, for writing the books, the exact books, that are my greatest pleasure to read, and that make me want to write.

It breaks my heart to be writing this post.