It’s funny how you can speak the same language as someone, yet still have no idea what they’re talking about.

I followed a link to a very short English-language article on the Indian movie website Filmi Tadka because the headline interested me: “Shahrukh Khan – Don’t Mix Religion with Politics.” Reading the article, I learned that at the distinguished India Today Conclave, “SRK expressed his concerns about the politicization of Mumbai by saying that Indian cinema is heading from Mumbai to Melrose. And though he would have preferred the transition as Bombay to Beverly Hills he thinks that that kind of alliteration is not allowed to Muslim actors.”

I know all those words, but because of my own ignorance, I don’t have the political or cultural context needed to understand them. First, what’s he referring to, exactly, when he talks about the politicization of Mumbai, and what does that have to do with global cinema and Hollywood? Second, if I’m understanding him correctly, why can’t a Muslim actor, in particular, call Mumbai “Bombay?”

My newfound love of Bollywood has led me to some really interesting, and sometimes muddy, research. You don’t have to watch a lot of movies or listen to a lot of interviews to absorb that people have strong mixed feelings about the Bombay/Mumbai name change. (In 1995, the name was officially changed from Bombay to Mumbai, for political/religious/cultural reasons that are really hard for me to put a tidy finger on. Here’s a quick summary from Wikipedia.)

Here’s a 2008 Slate piece about the USA’s relationship with India, called “Our Friends in Bombay,” by Christopher Hutchins; Hutchins deliberately calls the city Bombay repeatedly. Here’s a rediff.com article called “Mumbai vs Bombay” that helped me get one Indian’s perspective, at least, on the different implications of the names. Here’s an article about the brouhaha that erupted when director Karan Johar dared to use the word “Bombay” repeatedly in his movie Wake Up Sid (google this if you want to — you’ll find a lot of online talk about it). And here’s a request on MetaFilter from a traveler who wants some advice on what to call the city while visiting it. The advice the traveler is given, by a lot of different people, is contradictory and fascinating.

Who’s right? I don’t know. What the hell is going on? I don’t completely understand. It takes me a long time to get my feet on the ground with this sort of thing. I’ll keep researching, but in the meantime, I’m okay with knowing that I don’t get it. I think it’s worthwhile to realize and acknowledge our own ignorance about things, you know? Of course, it’s hard, by definition, because how can you see your own blind spot? But we should try. It’s dangerous to think you understand something when you don’t, and it’s dangerous to force something complicated into a too-simple explanation just for the purpose of feeling more settled and in control about what things mean.

Here’s another article about SRK’s comments at the India Today Conclave, from the Conclave’s own website. This one summarizes his comments about Mumbai, Hollywood, and how to globalize the Mumbai film industry with much more clarity than the other one does, leading me to think that the problem, in the first place, was that I was reading a crap article. :o) But I was too ignorant even to know that! (And this one doesn’t clarify the Mumbai/Bombay matter, either, or even mention it….)

And here’s something SRK said that I understand perfectly: “I truly believe that politicians should not use religion as an agenda. It is just not acceptable. The issues like education, development and women’s upliftment, which are sidelined, are the basic political issues which need to be looked upon.” And I’m not sure at what point in the proceedings he opened his suit coat, pulled up his dress shirt, and showed the audience his sixpack while sheepishly admitting that his wife doesn’t approve of such clownish behavior. (Photo here.)

Oh, Shah Rukh. You are my favorite international symbol of religious unity, and I will never tire of trying to understand you. :o) 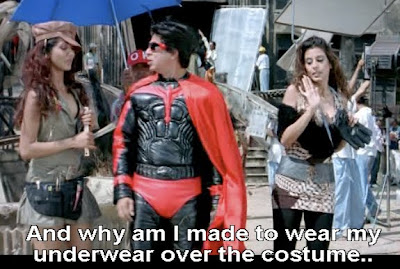 (Still is from the fabulous Om Shanti Om)