We all know the story, but I’ve never seen it told like this before. Gareth brings Verona of the Montagues and Capulets alive; his illustrated adaptation breathes wonderful new life into dialog I’d heard so many times that I believe I’d stopped listening to it. Look at this beautiful cover: 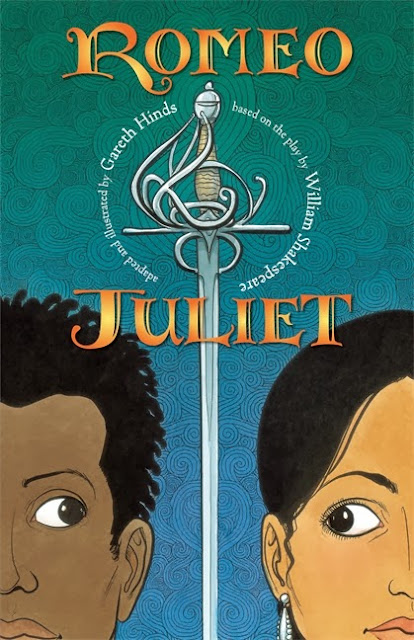 You guys, it has a sword-hilt ampersand.

Over at Gareth’s website, he shares a whole lot of the book online, in case you want to see more right away. I really recommend this book. If you’re like me, you’ll sit down thinking that you’re just going to read a few pages, then you’ll stay in your chair until you’ve examined every picture and read the entire thing.

This strikes me as an opportunity to tell a little story about Gareth (who is a friend) and Bitterblue, actually. Sometime after Bitterblue‘s  release, Gareth dropped me a line. “I have a little something for you,” he said. “What’s your mailing address?” Intrigued, I gave him my mailing address, then promptly forgot all about it. Until the mail arrived one day and I found a large envelope from Gareth that was well-packed and quite stiff.

Have you, by chance, ever received a large, well-packed, stiff envelope in the mail from a friend who is an artist?

Overcome with excitement, I ran inside and opened the envelope. Those of you who’ve read Bitterblue, do you remember that the sculptor Bellamew makes a sculpture of her own daughter, Hava, transforming into a bird? Well, here is Gareth’s idea of “a little something”: 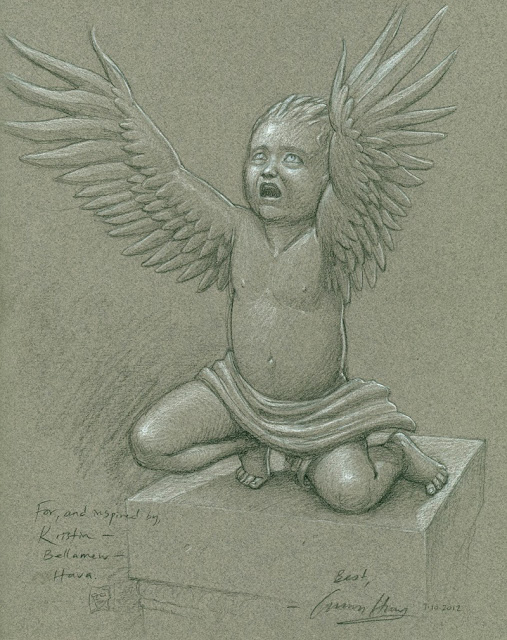 This beautiful drawing now hangs in a position of honor above the bookcase in my office. I love it completely.

HOWEVER, DON’T THINK FOR A MINUTE THAT THIS HEARTWARMING PERSONAL STORY IS THE REASON I LIKE ROMEO AND JULIET! You should all look at this book, because it’s great, and you may be moved to like it very much indeed. (That was a clever reference to my subject line (which is a line from Romeo and Juliet), in case you missed it.) :o)