(My title = words I like from singer-songwriter Gavin DeGraw. The song is called “I Don’t Want to Be” [link opens to the Wikipedia page; it doesn’t play the song].)

I never got around to cleaning that closet this weekend. That’s all right, I’ll get to it sometime this week — and I did make the time to go to Mount Auburn Cemetery, climb the tower, and take a look at the fall leaves. I love to see the world from high up, because it alters my perspective; it gives me some distance from my own tiny life and makes me feel more connected to all my people who are far away.

It was busy at the top of the tower; a lot of people were leaf-peeping. I probably heard four or five different languages. That’s pretty normal for Cambridge, what with the world-renowned universities, but I wondered if some of the people were tourists, coming to see New England’s leaves. I sat up there for some time while people came and went. I wouldn’t say that I reached a place of peace, exactly, but I did come to the realization that, well, I don’t want to be anything other than what I’ve been trying to be lately. I think “trying” is the most important word in that lyric.

Mount Auburn Cemetery is one of those cemeteries chock full of famous dead people, and every once in a while, I accidentally manage to find the grave of my favorite of the bunch, Winslow Homer. I stumbled across it this time. People always leave stones and shells on his grave, the shells, I suppose, because he painted so many seascapes, and lived much of his life on the coast of Maine. People bringing him shells makes me happy. If you don’t know Homer’s work, one of the things he was fabulous at was light. The image below, which I got from Wikipedia Commons, is, as far as I can tell, in the public domain, which means I can post it here. “Gloucester Harbor,” oil on canvas, Winslow Homer, 1873, courtesy of the Atkins Museum Of Art: 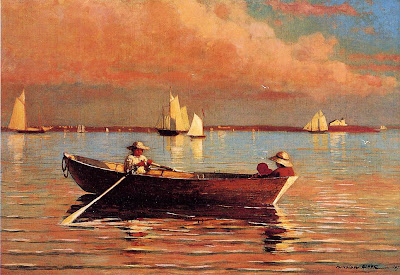 Local people, if you want to see the leaves from the top of the cemetery tower, go soon, because they’re already just past their peak. You can get a map at the visitor center, but I usually just enter at the main gate on Mount Auburn Street, then head for higher ground. It’s not very scientific, but I always do spot the tower eventually.

On a completely different topic: Here’s Jon Stewart reacting to the rioting by Penn State students when head football coach Joe Paterno was fired in the wake of the recent scandal. Last time I checked, my readers on this blog come from 116 countries and territories, so I’m not going to assume you all know what’s been going on at Penn State University. Therefore, trigger warning that this video contains somewhat explicit language about alleged sexual abuse of children by assistant football coach Jerry Sandusky. By the way — because I know you’re out there, and probably embarrassed by the contemptible behavior of your classmates — I grew up in Pennsylvania, I know plenty of thoughtful people who went to Penn State — I just want to give a shout out to all the students who didn’t riot, who don’t think football is sacred, and who understand why Joe Paterno couldn’t continue as head coach.