This is such a challenging time.

Every day we’re having to sit and watch in disbelief as people lie to our faces about COVID-19, how bad things are, and what to do about it. We watch in disbelief as nonviolent protesters are arrested and accused of violence — while the police use tear gas, rubber bullets, pepper spray, and batons against them. We watch in disbelief as white women pull guns on Black people after saying the actual words, “White people aren’t racist… No one is racist.” Our president lies so often, so willfully, childishly, self-centeredly, and so without compunction that FactCheck.org, a nonpartisan advocate for voters that aims to reduce the level of deception and confusion in U.S. politics, has a Donald Trump archive that is 107 pages long. And now I read that we’ve started executing federal prisoners again — despite what we all know about how flawed our criminal justice system is.

It can be hard to keep on top of how awful everything is.

I wanted to provide a few clarifying links, and recommend a book.

First, if you’re feeling overwhelmed by the number of people in denial around you — and the capacity for people to lie to themselves and others about reality — I want you to know that you’re not alone. Also, you’re not crazy. Also, THERE IS AN OBJECTIVE REALITY. Keep hold of it. And if you don’t know what cognitive dissonance is — this might be a good time to learn! A couple links —

Cognitive dissonance, when handled badly, is a killer. It makes people inexcusably ignorant, hurtful, and destructive. I find it helpful to learn about it, so at least I know what we’re up against — and also so that I can be better equipped to watch for it in myself, because after all, I was socialized into this society too. Maybe you’ll also find it helpful, especially now. When you’re surrounded by people who are lying to themselves… It can be incredibly disorienting! And distressing, if these are people who profess to care about you. Learn about cognitive dissonance and shine some light through the bullshit around you.

Next, on the not unrelated topic of “The Letter” (“A Letter on Justice and Open Debate,” published on July 7 at Harper Magazine and signed by 153 writers, artists, academics, and journalists). I really liked Hannah Giorgis’s thoughts about The Letter, over at The Atlantic: “A Deeply Provincial View of Free Speech“. Giorgis skewers The Letter’s vagueness. She also reminds us of what free speech actually is, and what threats to free speech actually look like. An excerpt: “Any good-faith understanding of principles such as free speech and due process requires acknowledging some basic truths: Facing widespread criticism on Twitter, undergoing an internal workplace review, or having one’s book panned does not, in fact, erode one’s constitutional rights or endanger a liberal society.” Yes! 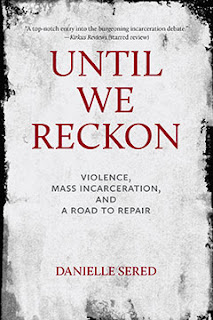 Finally, I’m listening to a really great audiobook: Until We Reckon: Violence, Mass Incarceration, and a Road to Repair, by Danielle Sered. Sered is the director of Common Justice, which is a program in Brooklyn that provides a survivor-focused alternative to incarceration for violent crime. What I love about this book is that while I’ve been aware that our criminal justice system is broken — and that it’s a lie that prisons keep anyone safe — I hadn’t realized that there are workable alternatives already in play. Sered presents an alternative to incarceration that creates not just safety, but healing. The program is very survivor-focused. Survivors are deeply involved in decisions about how the people who harmed them are held accountable. And since most people who commit violent crime have also been victims of violent crime, the program helps those who’ve caused harm to heal too. The book is realistic about why people harm each other, and about how to change the system. It’s a good introduction to the growing movement of restorative justice, and reading it makes me hopeful.

A heads up that Sered has a crystal clear grasp of what it’s like to have PTSD and is searingly articulate about how it feels to want and need a person who harmed you to accept responsibility for what they did. If you are a survivor — of any kind of harm, not just violence — parts of this book may be gutting. I recommend taking breaks now and then.

Also, if you don’t have time to read a book or if you can’t access it right now while the libraries are in flux, I can recommend a recent podcast episode on the same topic. It’s from the The Ezra Klein Show and it’s the episode called: “A former prosecutor’s case for prison abolition: Paul Butler on how our criminal justice system is broken — and how to fix it“. I learned a LOT about how broken our criminal justice system is from that episode. I noticed that Ezra also has an even newer episode, an interview with sujatha baliga called “The transformative power of restorative justice.” I haven’t listened to that one yet, but it’s on the same topic, so I’m guessing that’s also an interesting and informative conversation.

Okay! So those are the things I wanted to share. Hang in there, everybody. I’ll be writing another craft lesson blog post soon. Also, in Winterkeep news, I expect to have a cover (or several) to share with you soon! Be well, everyone.