I have, and have always had, the wildest, most vivid dreams when I’m sleeping. Some of them are hilarious in retrospect and I wake up laughing, then laugh at them all day long. Some of them are terrifying and horrible. I might share my dreams with a few people, but for the most part, I keep them to myself, because dream reports can be tedious.

BUT. I need to share the dream I had last night.

I have a dream. While dreaming, I record the dream and text it to Kevin. He’ll be amazed! But wait! Won’t he also be confused? It’s impossible to record dreams! Kevin will think this is a movie I filmed, with me as the main character and with clearly expensive production values, without telling him!!! He won’t understand it’s a dream! How terrible, to think of Kevin confused by my text! Wake up!

I wake up. I realize it was only a dream that I recorded a dream and texted it to Kevin. Of course it was! Because that would be impossible. Phew! I go to the store to buy some stew meat for dinner. They’re out of stew meat, and anyway, I hate to cook, because I get distracted and burn things. Why am I at the store? What am I going to do if they don’t have any stew meat? This is terrible! Wake up!

And that was my dream. Later, when I tried to explain it to my sisters over text, I got confused and realized I needed a chart. I’m pretty sure this is the first dream I have ever had to chart.

I think I’m awake now? That shoveling I did this morning sure felt real… 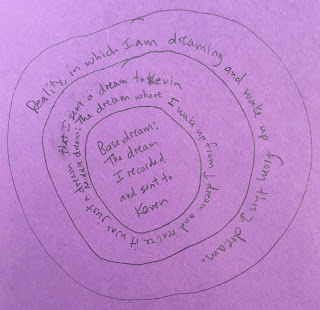 About a year ago, I finished knitting a blanket that was a gift for someone else and realized I missed its pieces piled up in my lap. I decided it was time to knit a blanket for myself :o). Wanting something cheerful for the cold, dark months, I chose this free pattern at Lion Brand…. and got started.

First I collected my colors.

This blanket is knitted in three parts: the reds and oranges in one big triangular corner; the yellows and greens in a stripe across the center; and the blues and purples in another triangular corner. 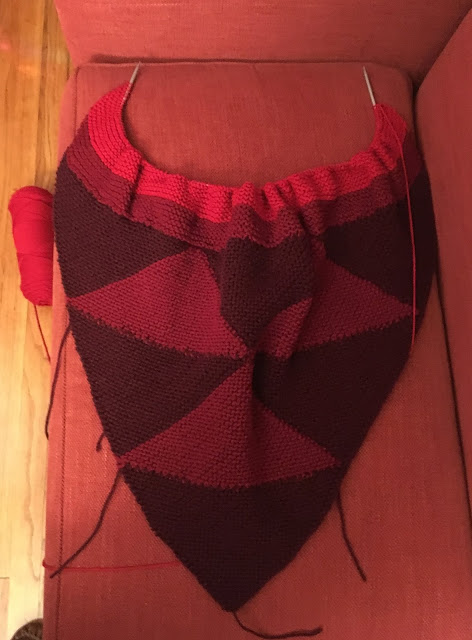 The pieces are worked in intarsia colorwork. This means that most of the time, I was actively knitting with more than one color, which I admit can become a bit of a tangled headache. Below, I’m knitting the center stripe in three different greens and one yellow, and I have all four colors attached to my needle at the same time. 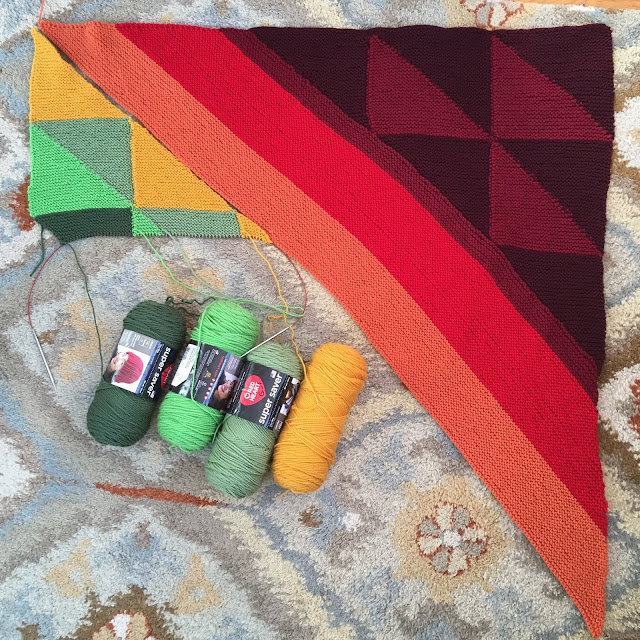 When I went to a writing retreat last February, half my suitcase was full of my blanket :o) 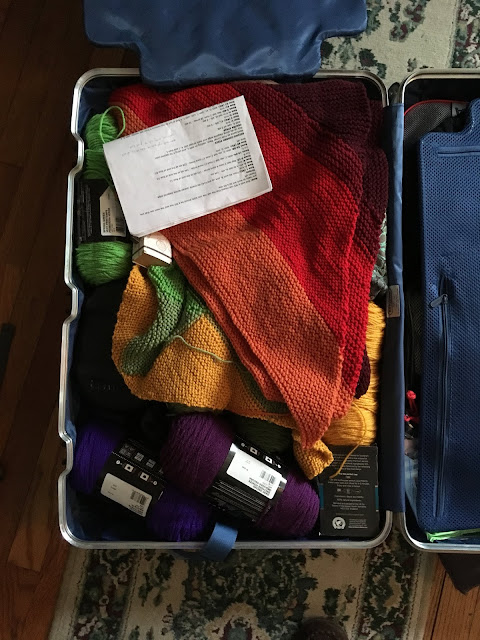 Below, I’ve knitted the red/orange triangle and the yellow/green center strip, and am just starting the  purple/blue triangle. All five of those purplish balls of yarn are attached to my needle as I work. Constant tangles! But pretty colors. 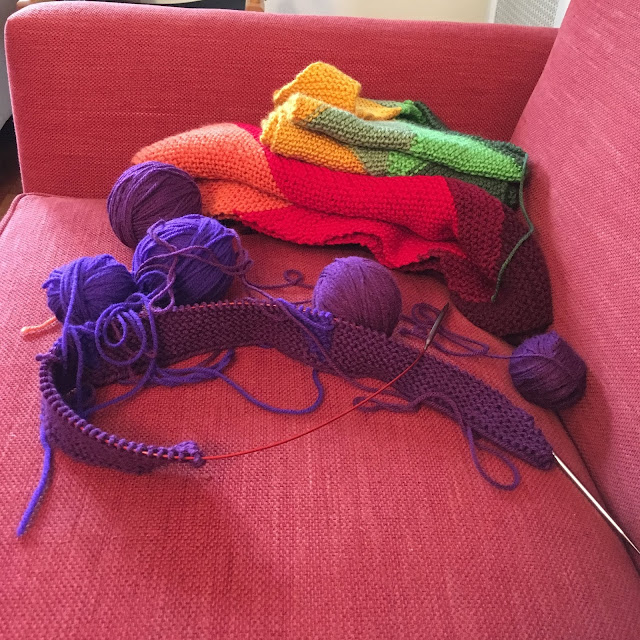 I had a bit of a hiccup at this point in the process, because after working for MONTHS, I discovered that I’d knitted my purple/blue corner piece much, more more tightly than my red/orange corner piece — which meant it was far too small to fit with the other blanket pieces. Why did I do that? Because I was in the middle of a really difficult revision with a stressful deadline. When I’m relaxed, I knit loosely. When I’m stressed, I knit tightly. SIGH. I had to take it all out and start again. I was so depressed about this that I put the whole project aside for the entire summer!

Then, this fall, I started up again.
Below, you can see the three completed pieces lined up on the floor. 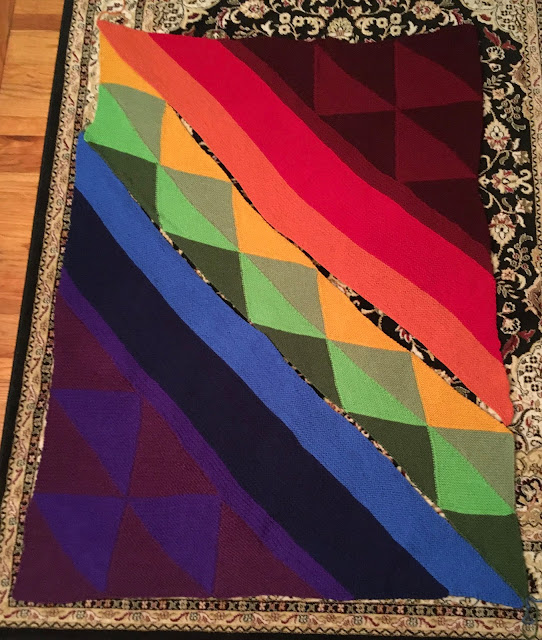 I attached them together, then, on the advice of several sages, chose yellow as the border color. All done! 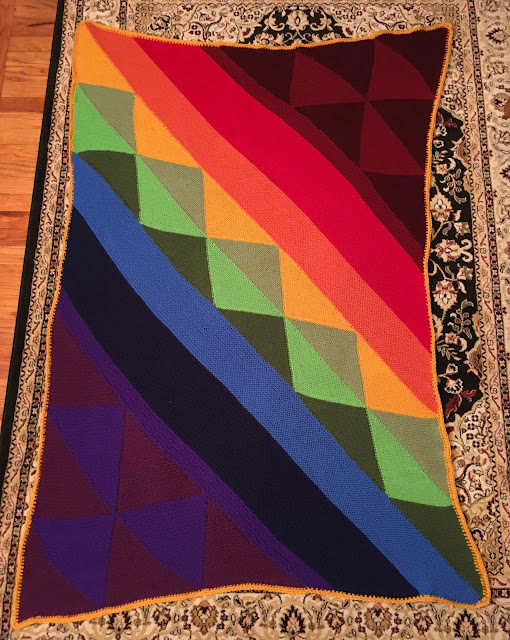 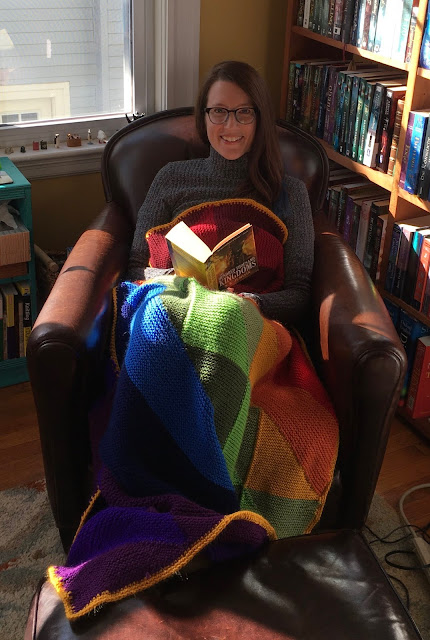 This year’s Halloween costume involved less preparation than usual. I’ll be honest, I’m still recovering from the year I dressed up as a library. My goal this year was something creative yet simple to assemble.
I glitter-striped a unicorn horn and made myself some ears… 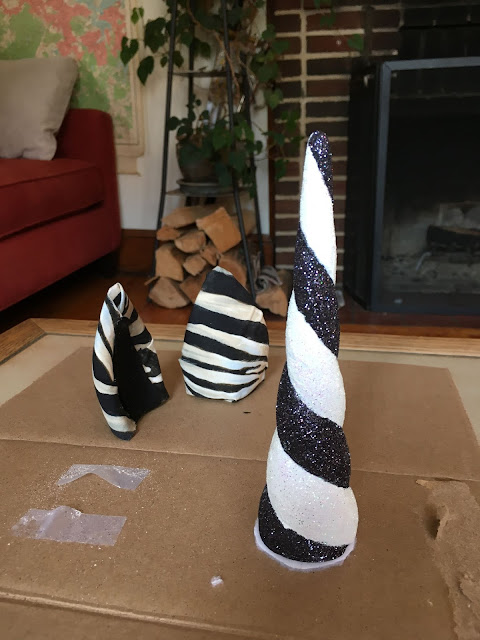 Then attached them to a Cruella deVil style black-and-white wig. 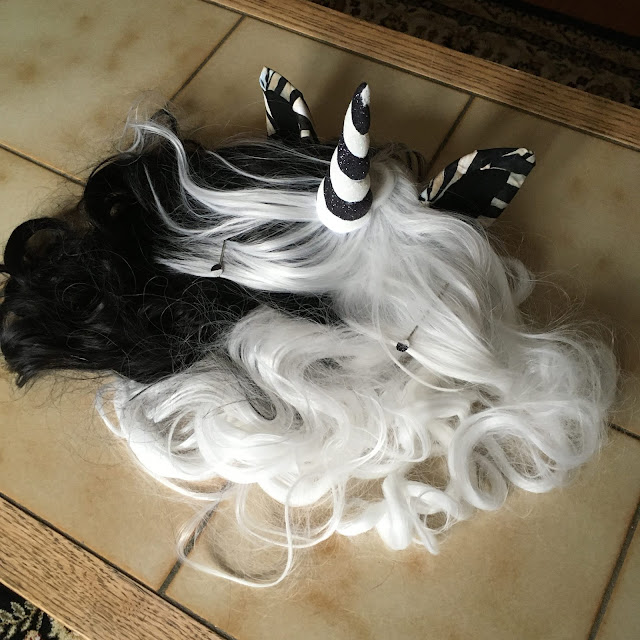 I figured a zebra unicorn wears something sparkly and striped, right? 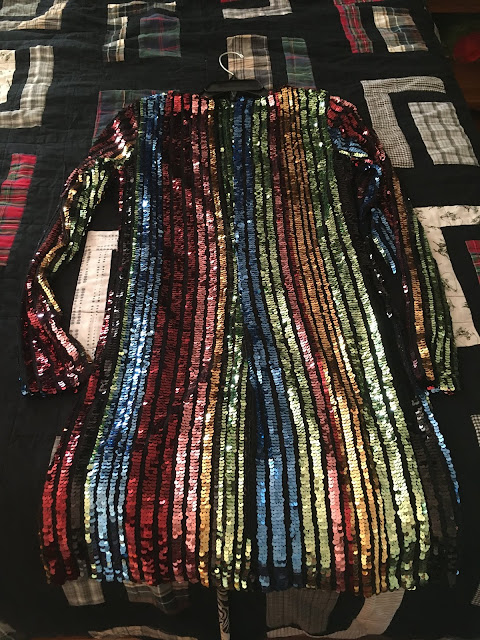 Nothing odd about this dress… *cough* 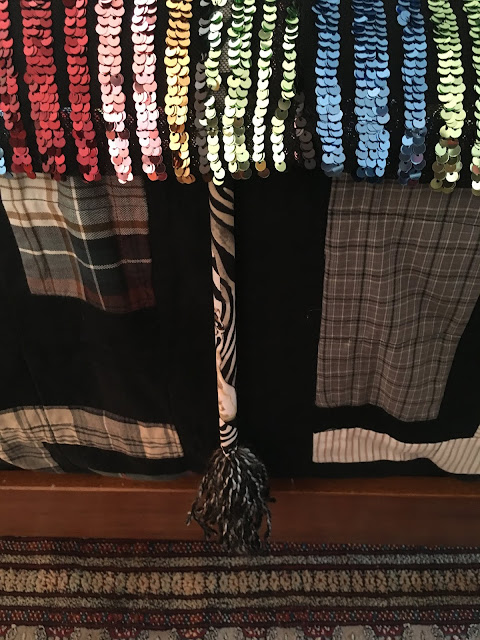 And this is when things got intense. The plan all along was to study the way stripes sit on a zebra’s face, then paint that pattern on my own face to create something magical. But it turned out SO CREEPY! 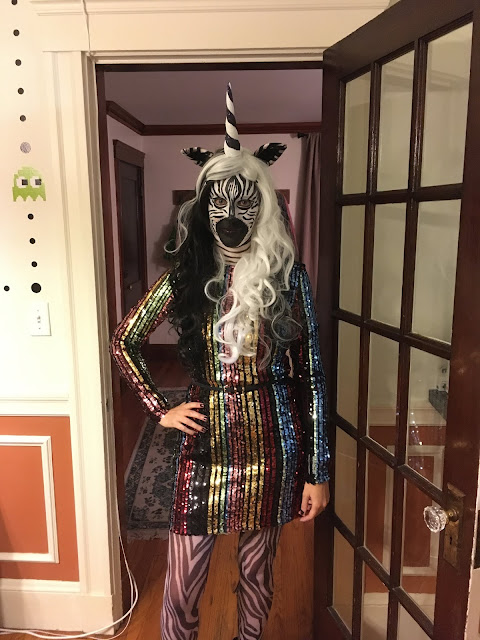 Creepy’s okay with me, though. 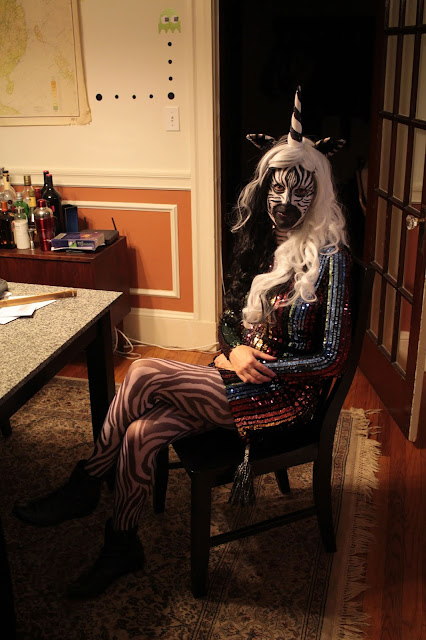 Click on any picture to embiggen/get a more focused view.
Till next year! :o)

The Boston Festival of Independent Games, BostonFIG Fest, is on Saturday, at the Harvard Athletic Complex in Allston.

Local people, if you’re interested in the best new indie games, whether tabletop or digital, you should come! And when you do, stop by Kevin’s booth to visit Kevin and his indie game, Starcom: Nexus. I’ll be there too, being Helpful. Come say hi! :o)

We also saw a lot of animals that were impossible to photograph, in particular, an Arctic fox. The animal sightings were frequent and always special. Most of the time, I tried to take a few pictures, but then I reminded myself to put my camera down and enjoy. Consequently, this is only a hint of what we saw, but I hope it gives a nice sense of things.

If you’re coming late to my report from my journey aboard a tall ship in the Arctic Circle last fall and want to see more, just search for “Arctic Circle” in the search box on my blog! 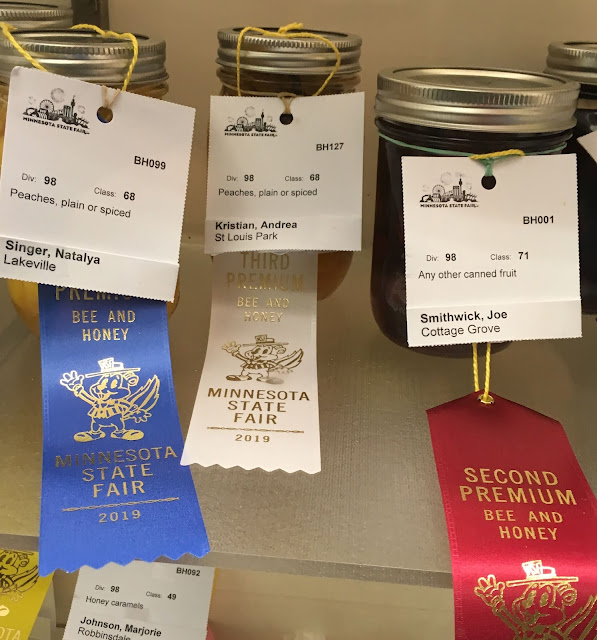 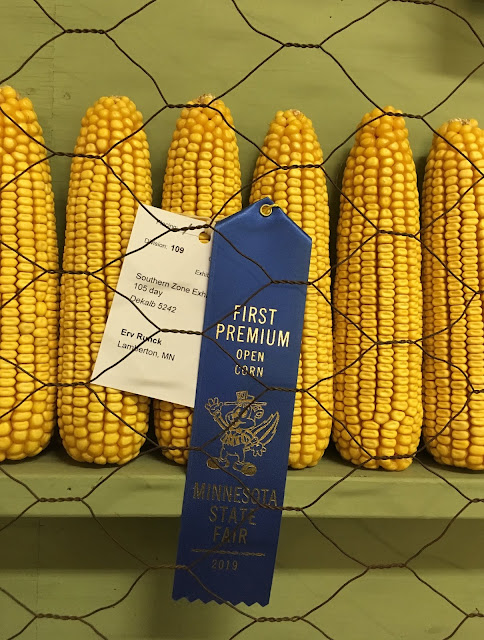 Hi, my dear readers! I know I haven’t been blogging lately, despite having a lot to share – including more Arctic pictures, from the trip that was almost a year ago at this point! These days, the amount I blog is inversely proportional to how intensely I’m working on the next book. This is good news for those of you waiting for my next book, but I am sorry about the lack of blogging :o). I’ve made a promise to myself to blog some pictures of Arctic critters soon. Stay tuned.

Have you seen “I’m Gay,” Eugene Lee Yang’s music video/dance performance, dedicated to the LGBTQIA+ community? It is stunning.

Trigger warning: it contains representations of violence toward the LGBTQIA+ community.

You were one of the caretakers of my life. The moment you saw me, you recognized me as one of yours and brought me under your wing. What a big wing it was—you brought so many people under there. I found some of my best friends under your wing, where you were sheltering them, as you sheltered me. We were all lovers of that “impractical” thing, children’s literature. Until I came to Simmons and met you, I didn’t know there was a place where people like us could go.

I think—I hope—I told you, before you died, that I have the best job in the world for me. It’s not possible to be happier about one’s daily work than I am about mine. Do you know who held the lantern and lit my way to this work? I would not be here without you. You changed my life, enormously. Do you have any idea how many women and men are thinking about you right now and saying to themselves, “She changed my life?”

You were so unique. You were a person who could never, ever be mistaken for anyone else. If faced with a line of your clones, it would’ve take me the briefest glance into your expressive, thoughtful face, the slightest sound of your careful grasping for the right words, for me to know which one was you. I would recognize your hug, too. I would certainly recognize your skirts and your earrings. I think I would recognize your perfume. After I got married last summer, you surprised me at tea. (Thank you, Cathie, for arranging that marvelous surprise.) You and Cathie gave me a bouquet that contained a beautiful flower and a beautiful umbrella (because you knew how much I love umbrellas). I brought them home to Kevin. As I showed the umbrella to him, trying so hard to express how much it meant to me, I exclaimed, “It smells like Susan!”

Last weekend, I was in Vermont by myself when I got the news that you’d died. I spent the day sitting on the porch of the cabin, looking out over the mountains, watching for hummingbirds, and reading a mystery novel by A. A. Milne. But really, I was thinking about you. I wondered if you knew that A. A. Milne wrote mysteries. I bet you did know that. I would’ve liked to talk to you about it. The story I read was just exactly the smart, funny (and annoyingly man-centered) sort of mystery you would expect A. A. Milne to have written, though Pooh is better. I wanted to know what you would have thought of it. You would’ve offered some perspective it wouldn’t have occurred to me to have. I would’ve gone to my friends, the ones I found under your wing, and told them, “Listen to what Susan said about this mystery by A. A. Milne.” And they would’ve laughed, delighted, then said, “That’s so Susan.”

While I was thinking about you, a hummingbird landed on my foot. It’s less surprising than it sounds; I was wearing pink and red socks with flowers on them. I thought to myself, “I hate that I can’t show this gift to Susan. It would have delighted her.” Like Edna St. Vincent Millay in her poem “Dirge Without Music” that was read at your service yesterday, I am not resigned to your death, and I do not approve. The best was lost when you died. “More precious was the light in your eyes than all the roses in the world.”

And now I’m writing this letter because you are gone, and I don’t know what else to do. How else can I express what you meant to me? I’m writing it to myself, and for all the people who loved you. I think—I hope—it helps to share grief, and to hear one’s own gratitude expressed. There’s no tidy way to wrap things up when someone dies, so I’m not going to try. I’ll just say thank you, Susan, for that place under your wing. I love you, I miss you, and I’m not resigned. I will never, ever forget you. 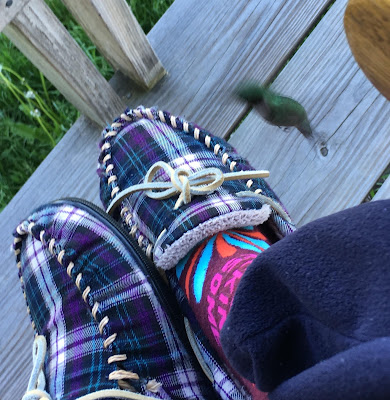 Here are two vids. Watch them in order: Taylor Mali, then Melissa Lozada-Oliva. ♥

This December, I discovered the Etsy shop Ever After Miniatures, which offers DIY printable miniature books. You buy the templates, print them out, then cut, fold, and paste the sweetest little openable books, which have readable pages inside. 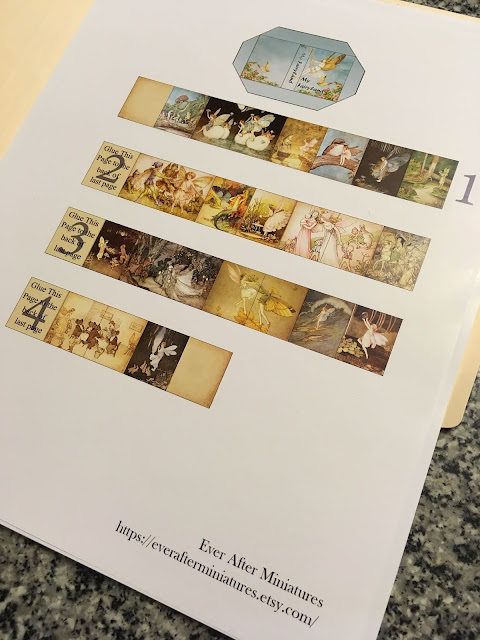 This sort of project is made for me. 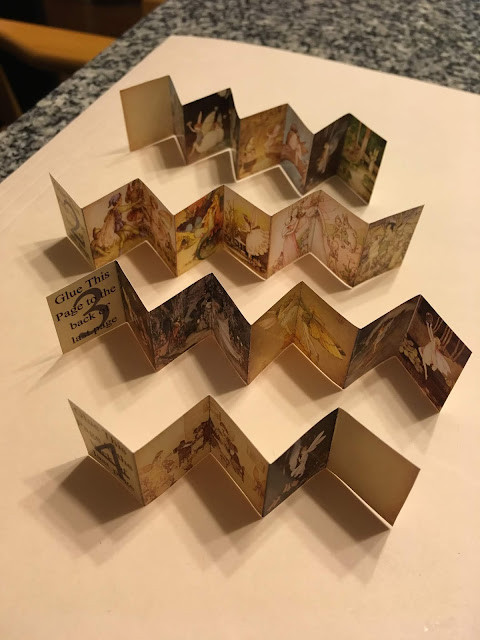 Most evenings, I would work on a few. I made them as gifts, mostly. 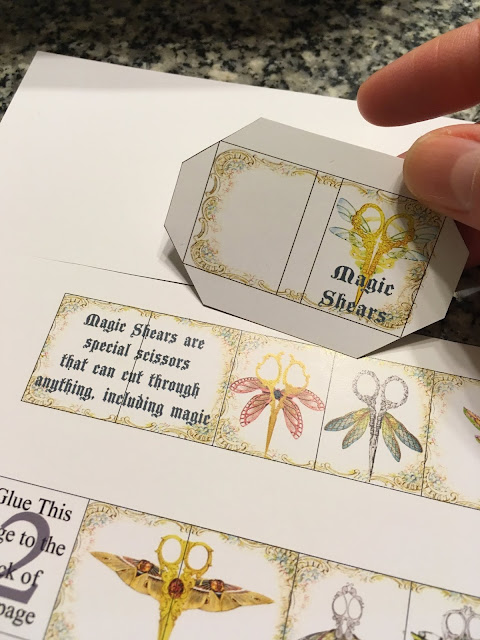 We have a small secret drawer at the end of our dining room table. I kept my project in there when I wasn’t working on it. 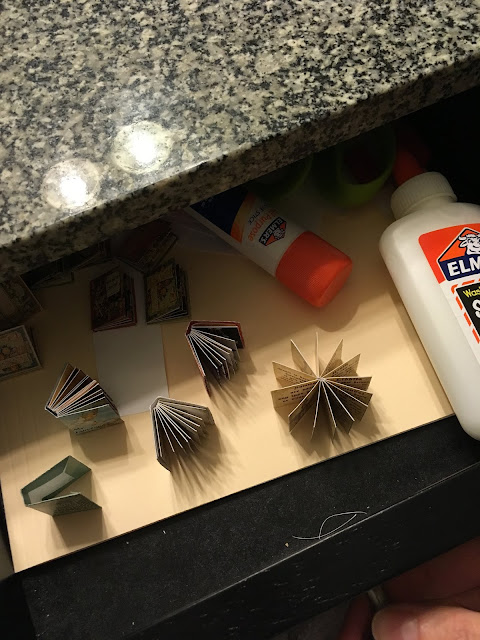 At a certain point, Kevin pointed out that they would make good tree ornaments. So I started adding strings and ribbons to a few of the covers. :o) 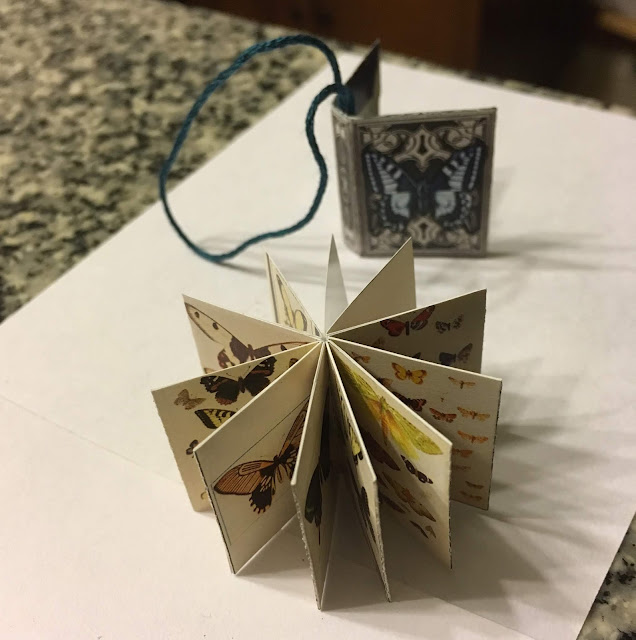 I got a little obsessed with this idea. 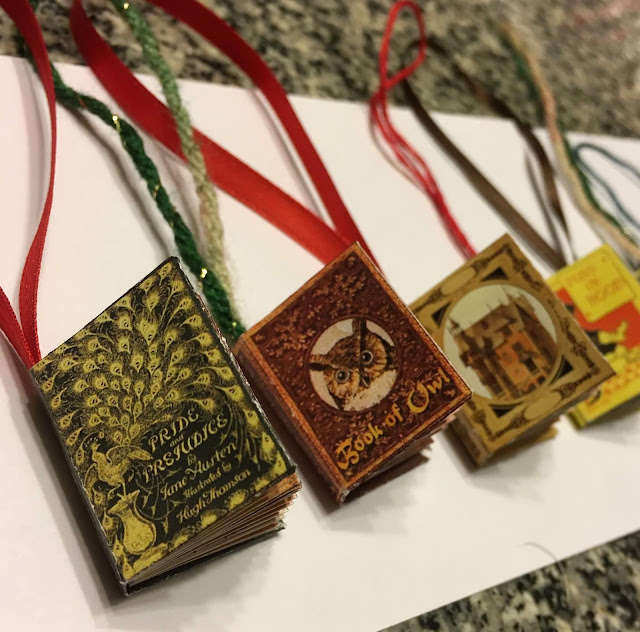 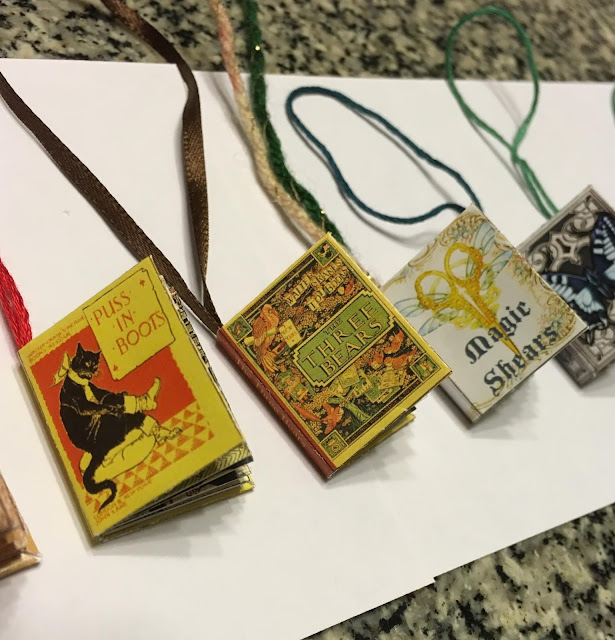 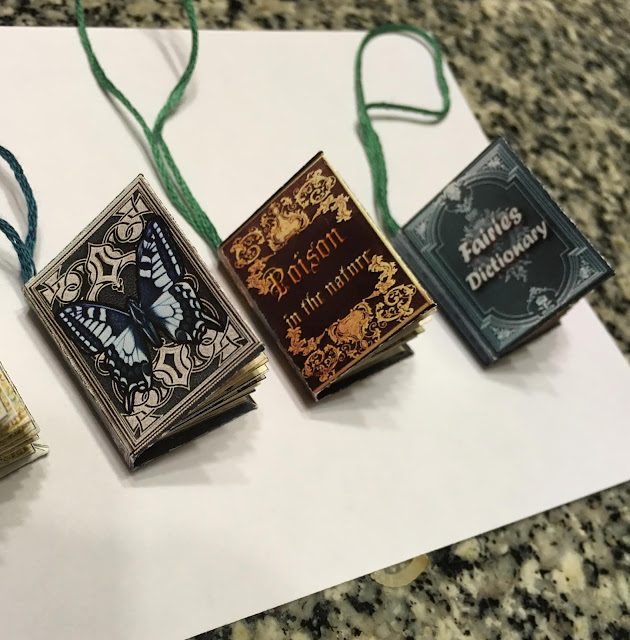 Here’s one of my favorite pages of Pride and Prejudice. 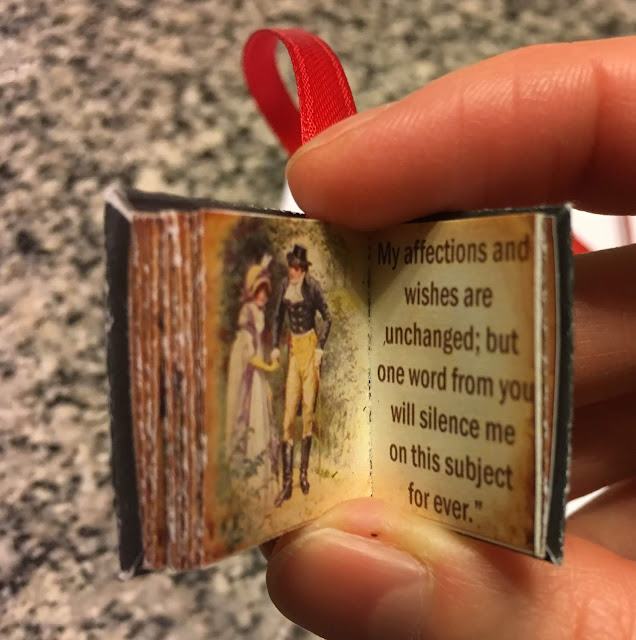 After they were dry, up they went! 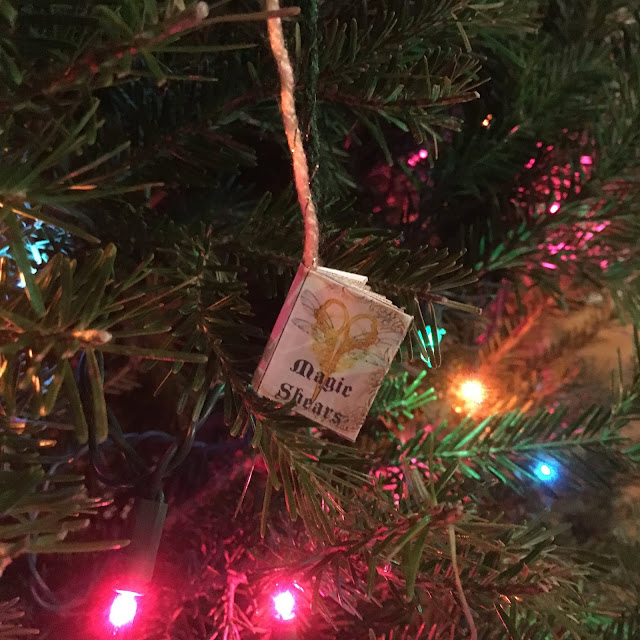 Lovely.
I have loads more Arctic pictures to share, and will do so as time permits. Hope you’re all having a nice January! As I type this, it’s sleeting in the Boston area, and our temperatures are expected to be close to 0°F tonight, which is about -17°C. Svalbard-worthy temperatures!