It’s birthday season on the blog!

Many, many of my peeps have birthdays in August and/or are Leos (including me), and every year I mean to create a new birthday poll, but then August comes along and I’m doing too many other things. I suppose that’s okay, since we seem to have established rather firmly that the number of people who want socks for their birthday is surpassed only by the number of people who want the power to summon any kangaroo in a 25-mile radius simply by closing their eyes and thinking, “Kangaroo, your master calls.” (That poll is still open, by the way. Feel free to vote.)

Birthdays make me contemplative. I am turning the ripe young age of 36. But instead of coming up with something soppingly meaningful to say about our journeys around the sun, I’m going to express my appreciation for a device I own now, but didn’t own a year ago: THIS PHONE. 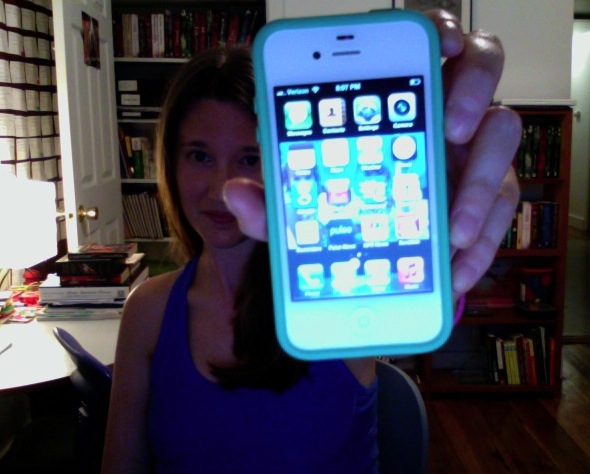 Dear people who invented the iPhone 4S: THANK YOU. I can’t type for extended periods of time without pain, and even when I’m dictating to my computer, there is occasional necessary keyboard use that causes me pain. But when I dictate (e-mails! texts! notes! reminders! web searches! addresses!) to this phone (which has excellent recognition), any necessary typing is on a small touchscreen, which is SO much less painful for me than a keyboard. Since I got this phone, there has been less pain in my life.

And that doesn’t even touch on how much I love carrying a dictionary in my pocket at all times, having an alarm clock that doesn’t sound like a truck backing up, being able to give emergency driving directions to a buddy when he calls me while completely lost in Alaska, being able to take better pictures than I’m qualified to be taking (and then share them, immediately), and the Scrabble game I’m currently playing with a friend in Minnesota. (This phone makes my faraway people feel closer!)

I’m so grateful that this piece of technology exists. I’m equally grateful that I can afford to own and sustain it. Yes, it’s just a Thing. But I am blessed to be carrying this thing into my new year.