So, one day in Hamburg, I saw a man who was carrying one of the most beautiful umbrellas I have ever seen. It had panels that were all these different kinds of deep purples and reds and I LOVE UMBRELLAS. I pursued him, natch. I’m not sure what I would have done had I managed to catch him. I guess kick him really hard, grab the umbrella, and run. Maybe poke him with it a few times to discourage vengeance. Tragically though (for me, anyway, maybe not him), he got away.

I notice when I’m in a place with beautiful umbrellas. Not every town takes pride in its umbrellas. Cambridge does. So does the little Bavarian town of Coburg. It was raining that day we were in Coburg, and my lovely traveling pal Ulrike and I were just fine with that, because we were, um, frankly, EXHAUSTED, and grateful for an excuse to sit in the window of a pancake house, eat Pfannkuchen, and watch the beautiful umbrellas go by.

Here I am, eating my (delicious) Pfannkuchen in Coburg. It was St. Patrick’s Day. Mark my Irish pride. 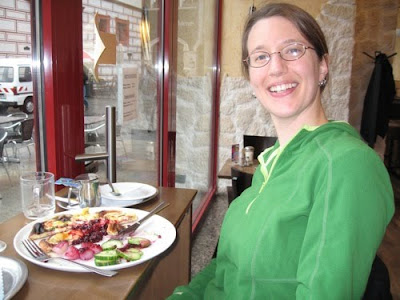 I fell in love with the atmosphere of the little towns and big cities in Germany. In Hamburg, I kept thinking that the same way Rome’s skyline is peppered with domes, Hamburg’s is peppered with spires — the spires of churches and city buildings, and then, when you get into the harbor, of cranes. And every town had the most beautiful church bells; I could hear them ringing everywhere. And the tall, narrow buildings on the narrow, cobblestoned streets (Kopfsteinpflaster! I could have a lengthy conversation with any German, as long as we only talked about pancakes and cobblestones. Or if they asked me whether or not I am kingly). …Where was I? Oh, right. The buildings and streets in Erfurt and Coburg were just like the buildings and streets I imagine for the world of my fantasy books.

The atmosphere at the Leipzig Book Fair was a whole other matter. So crowded, so loud, and so many cosplayers that I was endlessly amused and/or impressed. I watched this one guy with the most enormous antlers having trouble getting in through the door and I also remember being enchanted by some very fine pirates. Despite all the madness, as at every event I did in every city, the people at the fair were lovely, and too kind to me.

See how peaceful I look in this picture, reading from Fire for erlesen.tv? 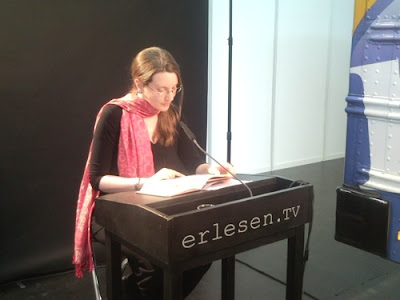 I was feeling peaceful at the time, but I was also surrounded by SO MUCH NOISE and could not actually hear a word I was saying. This happened to me a couple of times at the fair. It was my job to read, or to talk, but there was so much noise that I couldn’t hear myself, and I just had to stop worrying about it, talk in my own quiet tone, and trust that the microphone was allowing other people to hear what I was saying. People did tell me that they could hear just fine, so I suppose it was working. :o)

That’s it for now, except for one more thing: Diana Wynne Jones, may you rest in peace. You were taken too soon, and we’ll miss you very much.