So, I’ve still got those posts I want to write about writing, and I have a little time tonight… but I just don’t have the brainpower or the heart. Or, rather, I do have the heart, but it’s otherwise occupied. Brain, though: definitely absent.

In the meantime, in the world of the Internets, books, and television…

Internets!
Why on EARTH would Katsa and Hermione be fighting to the death? I keep trying to weigh their strengths and weaknesses and decide who would win, and I just end up giggling, because this is a fight that would not happen, except in the most bizarre circumstances. I’m thinking it would either need to involve a tragic misunderstanding that would lead to horrible guilt for the winner… or a weird circumstance in which the only way for one to save the world was to kill the other (i.e. — BUFFY SPOILER! — Buffy sending Angel into a hell dimension by plunging a sword into his heart)… which would lead to horrible guilt for the winner. Anyway, if you go over to vote, for that or any other match, do think it through. It’s not about who we *want* to win; it’s about who *would* win. Right? WE SHOULD ALL BE VERY LOGICAL ABOUT THIS. Or anyway, it shouldn’t be a popularity contest, because those aren’t fun. I’m loving the comments in which people argue for their winner.

Speaking of logical, I’m not sure why when my *book* is in a contest, my instincts tell me to stay away, but now that my *girl* is in a contest, I seem to be enjoying it. I guess I feel confident that Katsa can take care of herself.

Books!
I just finished rereading To Kill a Mockingbird. I hadn’t read it since high school, so it’d been a while. I was supposed to read it in grad school, but I confess that it is the one book I was assigned in grad school that I didn’t read. Why? Because it came up in a week in which I was also assigned The Wizard of Oz; Peter Pan; The Lion, The Witch, and the Wardrobe; The Perilous Gard; The House on Mango Street; Wrestling Sturbridge; 145th Street; and The Bluest Eye, plus turned in a paper called “Defining the Impossible: What is Fantasy?” There was… a lot of reading the semester I took Fantasy and YA together. Go to Simmons. It’s awesome.

Now I’m reading, and enjoying, The Greengage Summer, by Rumer Godden. Rumer Godden is magic. I think my all-time favorite of hers is A Candle for Saint Jude, but I’ve also read and loved China Court and In This House of Brede.

[Angel Season 5 spoilers ahead!]
So, my subject title today is something Fred says in Season 5 of Angel, in an attempt to comfort Harmony, after Angel yells at Harmony for having a camel delivered to the office. Poor Harmony. How was she supposed to know that Angel wouldn’t want to ritually sacrifice a camel in the lobby of Wolfram & Hart?

Here’s another favorite line so far from Season 5: “If you separate yourself from the ones you love, the monster wins.” This is something wise Angel says to a young woman werewolf whom I’m pretty sure was cast because of how she looks in a wet t-shirt.

Without a doubt, Angel is no Buffy the Vampire Slayer. But I am enjoying Season 5 so far. Partly because it’s not Season 4. (Almost every time I sat down to an episode of Season 4, I felt like I was taking one for the team. I’m so glad that’s over.) And partly because (!!!!):

At the moment in my viewing, Spike is rescuing people from vampires in dark alleys, after which he verbally abuses his rescuees for walking through dark alleys at night while wearing impractical shoes. *sigh* My hero. Lindsey, the… ex-attorney weirdly-tattooed guy?… is lurking around being gorgeous, mysterious, and possibly pointless. So far, so good. 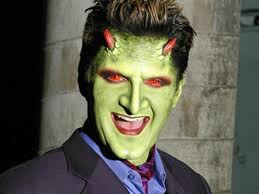 For those who’ve never watched Angel, Lorne, the green guy pictured above, is an empath demon who can read minds and hearts and destinies — if he hears the subject singing. In earlier seasons of the show, Lorne owned the most awesome karaoke bar where people came to sing for him, then get his life advice. He calls everybody by pastry endearments and I ♥ Lorne.

And that’s what’s going on here.