… for suddenly I can see the magic of BOOKS.”

(from the musical She Loves Me)
My childhood library in northeast Pennsylvania has a copy of my book, thanks to my mother. So do/will a couple of other libraries important to us, thanks to Mom and Aunt Rose. This makes me oh-so-fuzzy-and-happy.
Then, last week, a friend in Massachusetts reported that she’d checked her own library catalog on a whim to see if they had Graceling yet. They did. Next, an email came from another friend with this subject line: F CAS. She had just cataloged my book. Heeee!
It took a little time for the light to shine through the mud, but eventually I had a stroke of not-being-as-stupid-as-I-usually-am and realized that if it was showing up at other libraries, my own library might have it. I checked — several copies, and most of them were out. yAt! But even better, the copy at my local branch was NOT out!
This is the point in the story where I hightailed it outside and ran down the street like I was being chased by a rottweiler, except with an aspect of much greater joy. When I got to the library, there it was, on display in the Teen section. I picked it up and rocked it like a baby. It was wrapped in a cellophane wrapping, “Jacksonville Public Library” was stamped on the top edge, and a sticker on the spine said “Fic CASHORE, K.”
I’m starting to sniffle, just typing this. I can’t describe how I feel. This is so much more than my book being in a bookstore.
My book being in a library is like me being in heaven. 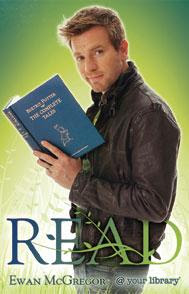