Over the weekend  I visited the NAIBA conference in Arlington, VA, to accept an award for Bitterblue along with Ian Schoenherr. Ian is the fellow responsible for the beautiful illustrations and decorations in Bitterblue: the chapter and part openings, the title page, the endpapers, the maps, the bridges, etc.

Ian and I had some trouble getting a nice picture together. 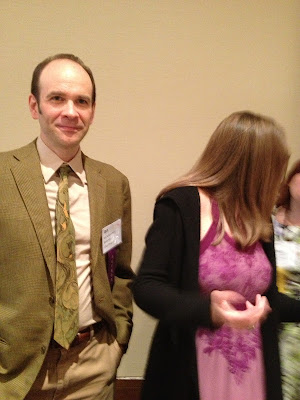 During my acceptance remarks, I told an anecdote about something that happened after Bitterblue was released, and I think I’ll share it here. What happened is that Ian sent me my two favorite sketches from the process as a gift — sketches of two fantastical bridges. And when they appeared on my doorstep, they had an effect on me that I doubt he anticipated… because here’s the thing. There’s a little bit of handwriting in Bitterblue. It’s in the Appendix, in the “Who’s Who” written by my crabby royal librarian, Death (rhymes with “teeth”), who has a cat named Lovejoy. There’s an inkblot on the page, and beside it, Death has written, “Note: Lovejoy has knocked over the ink! INSUPPORTABLE CREATURE!”

That handwriting was drawn by Ian, and as you can see, it’s very distinctive, recognizable handwriting. So — what actually appeared on my doorstep when Ian sent me those sketches was a mystery package addressed to me in what I instantly recognized as the handwriting of my royal librarian. I stood on my doorstep holding this package and feeling like one of my own imaginary creations had reached across the barriers of story and sent me a piece of mail. As the author, I’m used to reaching into that world. I’m not used to the feeling of my characters reaching out of that world to me, or even being aware of me. It was a surreal and magical moment. I felt like Death was thanking me — for creating him, and all of them. It was awesome.

Thank you, Ian, for that moment, and for everything else. And thank you so much, NAIBA, for this award, and for the opportunity to tell my story and sign some books with Ian. 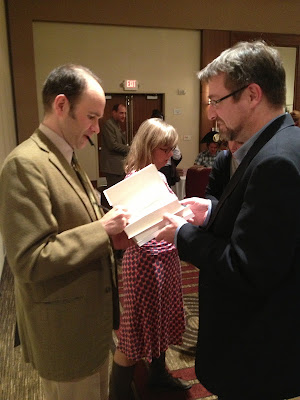 “What message do you usually inscribe in these books?” Ian asked me.

So that’s what he wrote… in that same handwriting. 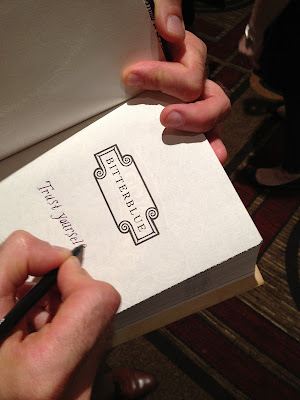 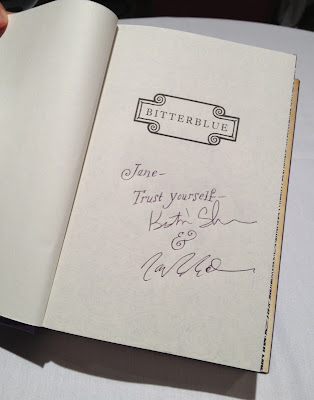