It’s birthday month on the blog, but life this summer has been so jam-packed (in all the best ways) that I haven’t given much time to blogging. So. Um. Happy birthday, everyone, including me. :o)

In my limited time today, I want to point out one online resource for learning to talk about abortion, then mention one really interesting book about women and eating problems.

First: a decade ago, my mother brought an article at the Public Conversations Project to my attention. It’s about a secret, six-year-long dialogue between leaders on both sides of the abortion debate, a dialogue which took place in the wake of John Salvi’s December 30, 1994 shootings at the Brookline Planned Parenthood and Preterm Health Services that killed two people and wounded five. The participants in this dialogue held passionate and opposing views on the abortion issue, but didn’t come together hoping to change each other’s minds. From the article: “Our talks would not aim for common ground or compromise. Instead, the goals of our conversations would be to communicate openly with our opponents, away from the polarizing spotlight of media coverage; to build relationships of mutual respect and understanding; to help deescalate the rhetoric of the abortion controversy; and, of course, to reduce the risk of future shootings.” Called “Talking with the Enemy,” the article is a wonderful read, and a helpful one, too, if you’re interested in learning how to talk about things with someone with whom you know you’ll never agree. The Public Conversations Project has assembled a whole bunch of links on talking about abortion, including “A Hard Conversation Made Easier: Tips for Talking About Abortion.” I’m now eager to poke around the rest of PCP’s site, which includes information about dialogues on things like science and technology, child labor and cocoa, same-sex marriage, and human sexuality and the church.

Next, I read a book called A Hunger So Wide and So Deep: A multiracial view of women’s eating problems, by Becky W. Thompson, released in 1994. From the flap copy: “Becky W. Thompson shows us how race, class, sexuality, and nationality can shape women’s eating problems… [This book] dispels popular stereotypes of anorexia and bulimia as symptoms of vanity and underscores the risks of mislabeling what is often a way of coping with society’s own disorders.”

Vera’s experience raises the question of whether there is something inherently wrong with using food as a comfort when something terrible occurs. If it soothes someone in a time of extraordinary grief – why not? For some of the women, a sign of recovery was coming to see eating as a reasonable way to cope with adversity given other “choices.” These questions bring the discussion full circle, since answering them rests on social and political analysis. The “just say no to food and yes to life” approach to eating problems, like the “just say no to drugs” ideas of the Reagan-Bush years, reduces complex issues of social justice and access to resources to psychological issues of self-control and will power. As long as the violence and social injustices that women link to the origins and perpetuation of their eating problems exist, women may continue to binge, purge, and starve themselves.

The link between eating problems and the traumas these eighteen women described to me indicates that prevention of eating problems depends on changing the social conditions that support violence and injustice. Making it possible for women to have healthy relationships with their bodies and their food is a comprehensive task: we need to ensure that children grow up free of racism and sexual abuse, that parents have adequate resources to raise their children, and that young lesbians have a chance to see their reflection in their teachers and community leaders. We must confront the myth of a monolingual society and support multilingual education; change the welfare system in which a household that is eligible for the maximum amount of assistance receives an average of forty cents worth of food stamps per meal; dismantle the alliance of the medical, insurance, reducing, and advertising industries that capitalizes on reducing women’s bodies to childlike sizes; refuse to blame women who are anorexic or bulimic; and dispel the notion that large women automatically eat too much. Women must learn to feed themselves along with – not after – others. Ultimately, the prevention of eating problems depends on economic, cultural, racial, political, and sexual justice. 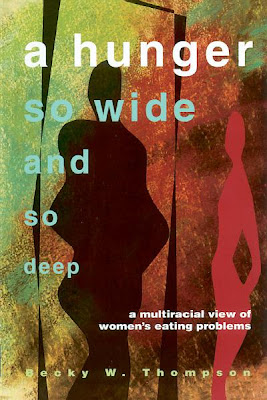